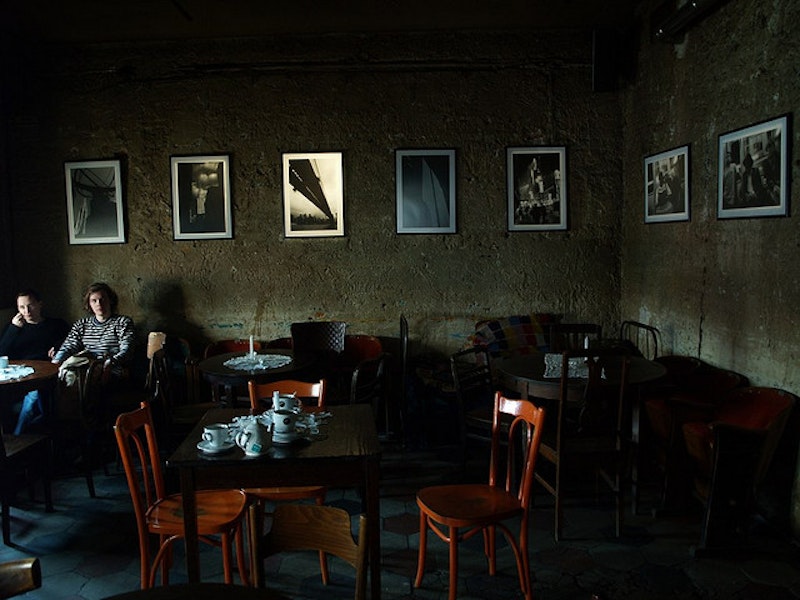 Every morning I look forward to rolling out of bed and chilling at my local Brooklyn coffee joint, you know, just checking my email, writing, and reading the Interwebs, surrounded by other “freelancers,” drug dealers or whatever they are, all doing the same thing. But there’s nothing more annoying than pulling up in front of your favorite beverage and having the whole experience ruined by the Coffee Shop Asshole. The CSA just kinda makes you want to pour hot liquid all over his fancy 17 inch MacBook Pro when he’s not looking.

But we can avoid that, now, can’t we? To help you through, here’s my list of five annoying people who go to coffee shops. Um, so consider yourself warned, people. Don’t be the Coffee Shop Asshole, or somebody will write a blog post about you!

Let’s start with the guy who listens to obscure music really loudly. Maybe he even neglects to plug the headphones into his computer. This is the guy who taps the table, taps his foot—taps on any hard surface, really, especially if it means he gets to use his pen like a drumstick. I mean, obviously he plays in a rock band, so his rhythm is dead on. Duh. This is also the guy who swings his head back and forth or, perhaps, sings/mouths aloud with the song. It’s coffee shop karaoke, everybody! Dude doesn’t think he’s annoying because he’s a virtuoso and obviously the next big thing, so you’re kind of lucky to be in his presence.

And speaking of being seated right next to somebody, meet the girl who hogs the whole goddamn table. You cruise into the place (El Beit) and see that it’s totally packed, and there’s no place to sit. You’re resourceful, so you pull up next to this cute girl, “Maggie,” and you’re all, “Is this seat taken?”—rhetorically, obviously, because you’re already putting your stuff down. And then she says, “No, but I’m sitting here and I need the space.” So that’s when you pause to look at her like she just lost her mind and you’re thinking I can’t believe she just said that and you’re saying she doesn’t own this place and you roll your eyes and now, unwilling to walk 10 more blocks to the nearest cafe, you put your stuff down, find yourself saying, “Yeah, well, you don’t own the place, so.” And she huffs and puffs but what’s she gonna do? Leave?

“Adam” is the guy who brings his whole multimedia center to the cafe—both of his laptops, his phone and iPad, and all four are plugged in. What are you doing that you need so many devices with you right now? Everybody knows coffee shops are scarce on the outlet front, because the more outlets there are, the longer you stay and the less you spend, you stingy bitch. He’s been here for three hours, plugged in the whole time, and your computer is about to die. You ask him if he really needs an entire power strip and he doesn’t respond—too enraptured by all the media going on.

And let’s not forget about the girl or guy (anonymous) who doesn’t bother to clean up after themselves. These are the people who leave their Herpes/bedbug/Bird Flu-ridden napkins, cups and other detritus right on the table for your pleasure. They’ve spilled some coffee or tea, and the table does that thing where it’s partially dry, partially sticky and covered in napkins, torn Sugar In the Raw packets and a couple of stirrers, all just floating there. Pick up after yourselves, people!

But the most annoying person of all is the guy who talks loudly on his phone to no one in particular. For some reason, it seems like screaming on your cell phone in a cafe is much more annoying that talking loud in a group of people. Especially if the guy is going on about the girl he just boned or the girl he is boning/wants to bone. I was at this cafe where the dude was basically talking in a foghorn to a lady friend about how she could be a porn star, about how he missed her privates. Really? He was describing in complete, heterosexual detail all the things he’d do to her when he got back to wherever she was at. Hey, bro—ever heard of sexting?

Which coffee shop antics get on your nerves?