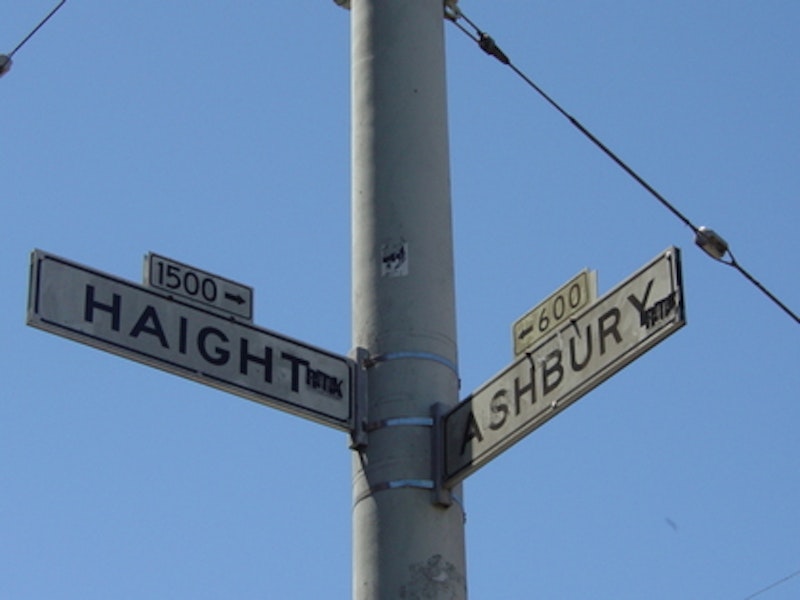 I’m an East Coast kid, and probably always will be. I grew up in Massachusetts and Maryland, within driving distance of the Atlantic, and can’t imagine living on the opposite shore at any point in my lifetime. However, if there’s a city that could possibly lure me west, it would be San Francisco.

Since I was young, I’ve always had a highly idealized vision of the Bay Area. When I was about 10 years old, I traveled there with my mother, and I remember coming off the highway and seeing silver fog pouring over the mountains and hills of South San Francisco like water. I was amazed by my father’s stories of when he lived in the Mission District and Pacific Heights, and the way he described it made it seem like a fantasy world, unlike any place I had ever seen or heard of. I listened to and loved the music that came out of the area in the late 60s, and I read about “The Summer of Love,” the Golden Gate Park concerts, and the acid tests. I wanted to be there. For me, San Francisco was this perfect place wrapped in fog and surrounded by mountains and blue-green bays, enclosing it from the rest of the world. It wasn’t until this month that my wonderland image of the city gained an element of reality.

I made the long trip across the country with my mother to visit a few friends and family, and for a while, I was still in my dream world. We stood at the summit of the Twin Peaks, staring out at the skyline nestled in fog and flanked by those sepia brown hills and that shimmering bay. We sat on the edge of the Pacifica cliffs over the ocean. We had breakfast at Pier 39 and watched the sea lions play king of the hill on the docks that they had invaded. After a day of being a tourist and loving every minute of it, we got in our car and took that trip we had made years ago, across highway 101 to South San Francisco. My childhood memory of those hills was crystal clear in my mind.

We got on the highway, turned off on the exit and came around the bend, and there it was. A big, round Target symbol, rising up above the store smack dab in the middle of the landscape. It was like a giant red stamp that said, “This isn’t wonderland. This is a city.” The next day, we drove through the Tenderloin, one of San Francisco’s most run-down, high-crime neighborhoods. Looking out the car window at vacant, boarded-up buildings, damaged cars, and weather-wearied homeless people, I had visions of my home city of Baltimore.

I was starting to wake from my dream. I saw gas prices at almost five dollars a gallon, and parking garages almost double the price of any garage in Maryland. Just about everything seemed to be a lot more expensive than anywhere else. After living in a city for two years, these things became much more significant to me than they ever were before.

Later in the afternoon, we drove to Haight-Ashbury, and I hoped there would still be hippies in the Haight. To my surprise and delight, I wasn’t let down. We saw the expected gift shops and commercialization capitalizing off Hendrix and the Doors, but as we parked on the corner, in the place I had only seen in photographs, there were three young kids, singing and playing guitar on the sidewalk with a sign that said, “Need money for LSD.” The neighborhood was a nuthouse, the sidewalks teeming with long hair, tie-dye tee shirts, and everything else that would make “the man” mutter in disdain. It wasn’t the same as 1967, but it was close enough. As we drove out down Haight St., we looked out the car window to see a lady balancing on a board atop a wooden barrel, dressed in full Viking armor, a spiked helmet and a ballerina tutu, singing and playing the accordion. She’s my new San Francisco memory.

On our last day in the city, we had breakfast at a somewhat run-down little yacht club on the bay, watching a Cajun zydeco band jam on accordion and spoons for hours as some of the strangest people I’ve ever seen tore it up on the dance floor. As I sat observing a Snoop Dogg look-a-like two-step with an elderly woman, I started to get that same feeling whenever I thought about the San Francisco hills as a kid. It may not be the wonderland I once dreamed of, but it still has enough of that old spirit to keep you surprised at every street corner