Aquaman Is Not a Badass

Let him ride his seahorse. 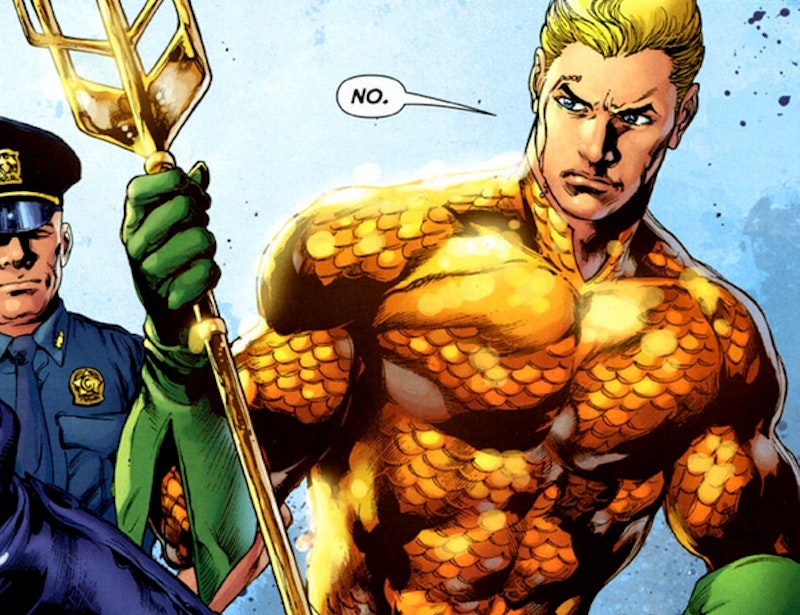 Quick superhero quiz: What is wrong with the following sentence?

"Despite his stature today as one of the most important heroes of the DC universe, Aquaman started out as little more than a support hero."

It's not a trick question. What's wrong is that it's complete nonsense. Aquaman is not now, and has never been, "one of the most important heroes of the DC universe." He's certainly not one of DC's most popular characters—he's no Superman or Batman, and hasn't even been able to consistently support his own title over the years. He's never managed multi-media success, like Wonder Woman in the past or Green Arrow at the moment. There’s never been an important, critically successful Aquaman comic; there is not an Aquaman equivalent to Alan Moore's run on Swamp Thing or Jack Cole's run on Plastic Man. Nor has Aquaman been at the center of any giant successful crossover events (as, say, Green Lantern has, for better or worse.) Aquaman is, and has always been, a footnote at DC, a tertiary character when he's lucky. He's more important than Bouncing Boy or Captain Carrot, but I don't see how you could make much of a case beyond that.

But there's also a deeper, more confusing wrongness about the claim that Aquaman is important. That confusion being—why? Why would anyone say this? What motive could anyone have for trying to convince themselves or others that Aquaman—Aquaman, of all fish-people—is "one of the most important heroes of the DC universe" when that's clearly not the case?

The context here helps, though only to some extent. The quote is from James Whitbrook's piece at io9, in which he argues that Aquaman is, or should be, a badass. Claiming that Aquaman is important, then, is meant to buttress the central point that Aquaman is cool, that he’s not a wimp, and that more people should respect him. Aquaman is not just some fish joke; he's powerful and central, and violent. Plus he has suffered.

"[Robert Loren Fleming's 1989] Aquaman was no longer a supporting star but a leader—he commanded armies as well as the sea. And a no-nonsense attitude to violence let him stand alongside, and sometimes in contrast, to the Justice League as an equal—not just in power but in tragedy, thanks to the death of his son and his wife being driven insane."

To some extent, I suppose this all makes sense. To an Aquaman fan, Aquaman is important; therefore an Aquaman fan wants Aquaman to be important to other people—and to get an awesome movie role (which is what Whitbrook hopes Aquaman will have in the Superman/Batman film.)

Similarly, Wonder Woman fans I've spoken to often get very touchy when I point out that Wonder Woman isn’t that popular. I love the original Wonder Woman comics by William Marston and Harry Peter, and even wrote a book about them. But after a very popular debut, Wonder Woman comics have been mostly mediocre and widely unread. The television show in the 1970s was a massive hit, but it's been decades since she had a major solo screen success. Wonder Woman is better known than Aquaman, sure—and she may well gain a much higher profile if Gal Gadot is popular in the role. But for the moment, as far as cultural caché and popularity goes, Wonder Woman is no Katniss or Beyoncé. That doesn't mean that fans can't love her, it just means that the fandom at the moment isn't a mainstream interest (unlike Batman's, or Green Arrow's, or, still, I think, Buffy's.)

Again, Wonder Woman fans often bristle when I say that Wonder Woman isn't as popular, or as culturally important, as Katniss. Superhero fandom has an odd dynamic. The comics, where most of the characters originated, are a specialist interest. Readership even for popular titles is a rounding error in the budgets of the mega-corporations that own the companies. But the films and television shows using those comics characters have a huge popular audience. There's a powerful allure in the possibility that suddenly everyone could all at once come to love and validate this largely disregarded and ignored thing that you care about. Aquaman is not important, but maybe if you wish hard enough, he will be. I mean, it happened to Green Arrow and Iron Man. It happened to Groot. It could happen to anyone!

It's interesting, though, that not every fandom would necessarily want it to happen. In music fandoms, for instance, people don't always want the thing they love to become common coin. Punk rock kids are often resentful when their band blows up. They prefer the early albums, before the band got signed to Geffen and Joss Whedon glopped on all the slick production. Nirvana and Pearl Jam; yawn—real grunge fans listen to the Melvins and the U-Men and Dickless.

As the detour into grunge snobbery suggest, resenting the mainstream can result in a lot of tedious gatekeeping, and comics certainly don’t need more of that. But I wish fans could be a little more comfortable loving the thing they love without worrying about whether Zach Snyder will think it's badass.

The most poignant part of Whitbrook's Aquaman piece is this: "[Aquaman's] original origins were that he was a scientist, trained to survive underwater and communicate with sea life. He rode around on seahorses, and tended to shy away from violence. Even in the transition to the Silver Age, he had a cutesy octopus side-kick named Topo that Aquaman trained to play instruments and sing Happy Birthday."

In other words, Aquaman isn't a badass at all, and he's never really fit into the DC universe very well because he was originally intended for "younger audiences." He wasn't supposed to grimly battle bad guys and weep for his dead child; he was supposed to frolic with undersea friends and teach his pet octopus to sing "Happy Birthday." Talking to fish isn't very useful in fighting super villains, but wouldn't it be kind of fun to have a whale for a friend?

The obsession with what's important and what isn't, and the focus on films, ends up turning every fandom into the same fandom; every superhero has to be about being a badass. And if you love badass Aquaman, you love badass Aquaman, I guess. It would be nice, though, if superhero fandoms could be a little less obsessed with "importance." Badasses are clustered so thickly upon our movie screens that you can barely figure out where one ass ends and the other begins. But only Aquaman rides a seahorse.