Pets are a girl’s best friends. 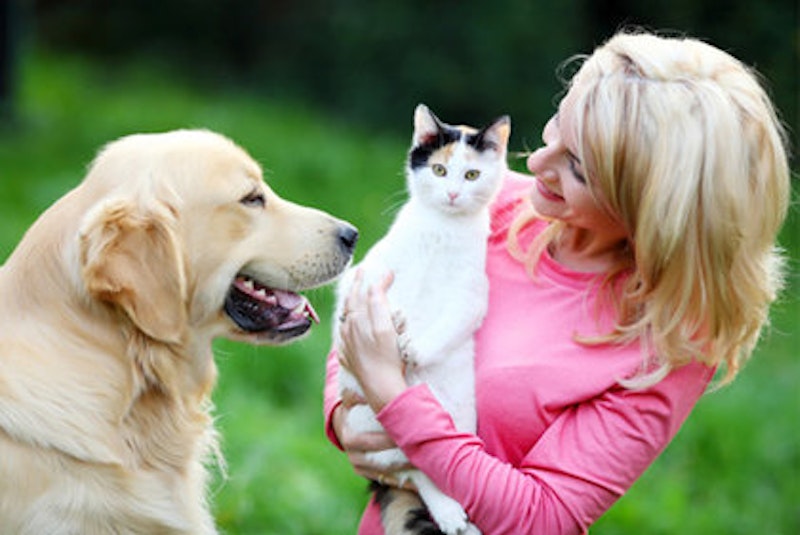 Those of you who are animal lovers understand what a big role pets play in the home and family dynamic. When I was growing up I was allowed one dog, Blackberry. My older brother was 10 years my senior, so essentially I grew up as an only child. Blackberry was more a sibling to me than my own siblings. The Irish Catholic neighbors next door had five children and no pets. There was always some kind of action at their house and no one was ever lonely, but I think they were all jonesing for a dog. They would often show up at our house not to see me but to visit my furry brother.

When I was 10, Blackberry died and my younger brother was born. I pleaded for another dog but my parents kept putting it off, convincing me of the lie that brother was allergic to animals. I found out what great con artists they were when my brother was old enough to move in with his girlfriend. She had two cats, a Jack Russell terrier and a hamster. I never heard a sneeze, wheeze or saw any strange red rashes appear on his body. It was all a parental ruse and for years it worked beautifully.

From the moment I left college, I made up for lost time. I immediately bought Crusoe, a golden retriever. I took him to work, social events and obedience classes. I taught him to sit, stay and heel. He was a quick study. My boyfriend tried to teach him tricks like “Go fetch the yellow Frisbee out of the water” and “Pick up The New York Times and bring it to me.” He was a great dog, although he didn’t retrieve very much. Crusoe stayed till old age, the boyfriend didn’t.

Through the years I acquired other cats, dogs, rabbits, goats, chickens and roosters. We fostered and rehabilitated so many animals we lost track of who was who. There was Bagel the beagle. One week I ran a newspaper ad for “Found Dog.” Two weeks later, Bagel disappeared and I ran an ad for “Lost Dog.” I housed two cocker spaniels with Los Vegas tags, a pit bull from Colorado and raised a baby turkey vulture abandoned in the barn. Our house was the repository for all lost creatures large and small.

My children learned many lessons through animals including compassion and responsibility. We felt guilt when we came home late or if we weren’t up early enough. Everyone did what they could to care for the pets and in return received unabashed, unconditional love. How sweet is that?

Psychologists long ago confirmed what most pet owners instinctively know: for some people, bonds with animals are as strong, if not stronger, than those with other humans. Pets configure not only a family’s routines, but also its hierarchy, social rhythm and network of relationships. Several new lines of research help explain why this overall effect can be so comforting in some families, and a source of tension in others.

My cousin Jeff almost broke up with his then-fiancée because of her dog. He confided in me that the mutt was allowed to lounge on the new Ikea couch at will. If his significant other was out of town, Jeff was expected to brush the hound’s teeth each morning. He drew the line on that one; they got married, but the step-dog continues to be a point of disagreement between them. I hope they never have kids.

This week, a year ago, my all-time favorite pet, Baby Dumpling, died. She was a black lab/retriever mix and my best confidante. She saw me through a marital separation, the sale of my business and recovery from two herniated discs. If human, she would be the epitome of a person of substance. She even unknowingly stopped disputes between my children.

Last night, my older cat, Puck, passed away. I’m left now with just one animal, her son, Ivan the Terrible. He’s not so much terrible as horrible, not unlike an Eddie Haskell. He taunts other animals mercilessly and my kids all learned how mean and unfair a bully could be through Ivan’s behavior. He’s mellowed with age and in real life would be a criminal turned success story. Sort of like Marky Mark.

Anyway, now the dynamics are just the badass bully and me. My children are gone and I wonder what this one-on-one will be like. He’s out sitting on the deck tonight and won’t come in, most likely thinking the same thing. Although we are both grieving, I think we are also secretly hoping there is a stray puppy coming down the pike soon.