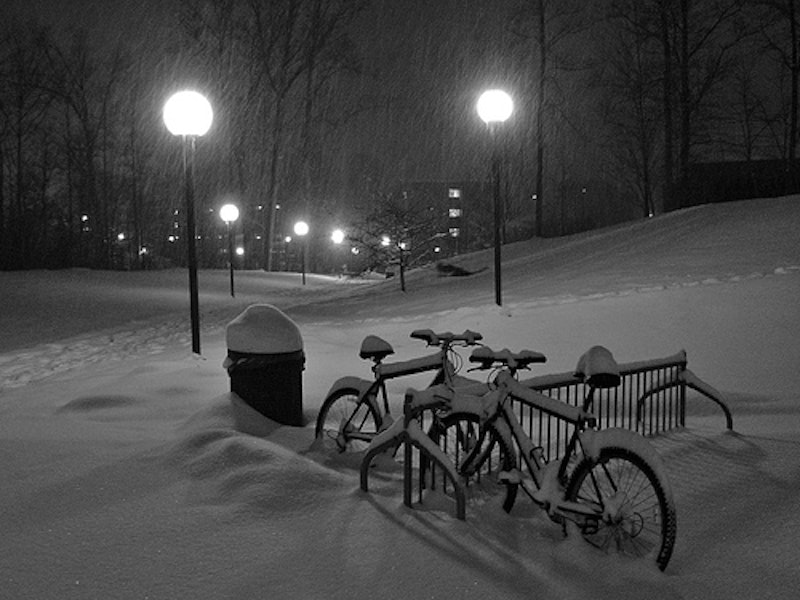 Riding the Tarmac is like flight; when I stand on the pedals and hammer the bicycle feels like it’s surging forward on its own. This is fine for zooming along on deserted, clean roads, but it’s nerve-wracking over broken pavement or gravel or in stop-and-go traffic, not because the bike responds to any of this badly but because I’m afraid that I’ll damage it. This was not a bike that one could ride down to the deli and drop insouciantly on the grass; I would never consider leaving this bike outside unattended, or subjecting it to the untutored caress of a lock.

I lack the specialized (and very expensive) tool to adjust the seat on the Tarmac. Should I wish to raise or lower the saddle I need to bring it in to a bike shop or purchase a torque wrench—if I were to tighten the seat clamp too much, without a precision tool to measure the Newton-meters of force applied to the wrench, I could destroy the bicycle’s frame. You can’t even really repair carbon; one wrong stroke and I would have to throw myself on Specialized’s mercy and see if they would replace, for a fee, the part of the bike that makes it a bike rather than a box of undifferentiated Japanese hardware. Maybe after I’ve owned the Tarmac for a few years I’ll become more cavalier about its treatment, but for now I’m fiercely and obsessively defending it. It makes a person feel tainted.

Maybe that’s why it’s such a pleasure to ride the old, beat-up Cannondale around. This morning it was raining and I thought I’d just walk, can’t expose a bicycle to rain! Then I recalled the plastic fenders I had lately installed on my Cannondale. Bike fenders look a little goofy and they seem ridiculous—if you’re riding a frame that’s completely exposed to the elements, why would you require dainty little curves of polycarbonate to cover the wheels? As it turns out they do an excellent job of deflecting road spray, the plume of filthy water than an un-fendered bicycle sprays all over your back and crotch and so on. Not only is this unpleasant, it’s rather bad for the bicycle, sapping its essential oils and throwing water into the frame and bottom bracket and other places where it will work its nefarious plans in perpetual darkness. So riding a bike with reasonable fenders is no worse than jogging in the rain, except of course for the slippery water everywhere and the fact that wet rims degrade the performance of your brakes.

I’m sold on fenders; there are a few other things you can buy that will make bicycle commuting more feasible. You’ll need a comfortable saddle (comfortable, not cushiony or wide; you want to be able to pedal). You should probably get some lights (Nashbar sells a battery-powered front and rear set for around $20, and it’s not bad), and if you can bear the shame, a reflective vest. Platform pedals are fine, and you can get plastic clips and straps. You may find a use for a rear rack, which can be equipped with panniers or a trunk bag (I’m a fan of the simpler trunk bag). Note that your bicycle will need to have eyelets in the frame for the rack, or for fenders for that matter; most mountain bikes and commuter bikes will, most modern road bikes won’t. If you can’t bring a bike into the office you’ll require one or more locks; my philosophy is that the brand and type (u-lock or cable lock) doesn’t really matter that much. Bike thieves can easily defeat almost any lock, but would much prefer picking up a bike with no locks at all, or a sporty, re-sellable bike that doesn’t have a bunch of nerdy shit all over it. A helmet, some gloves, and some intensely dorky pants-protecting elastic bands complete the ensemble.

Anyway, bicycle commuting, which is supposed to be utilitarian and boring, has actually introduced me to a certain carefree style of cycling that I might have experienced when I was a child but for the fact that I lived on a cul de sac at the bottom of a steep hill. Riding a racing bike is exhilarating; commuting to work on a big, fat, comfortable, indestructible mountain bike is, quite surprisingly, tranquil and pleasing. We’ll see if I’m still harping on this string during the winter.