Or, how I learned to stop worrying and love the… Oh shit a UPS truck! 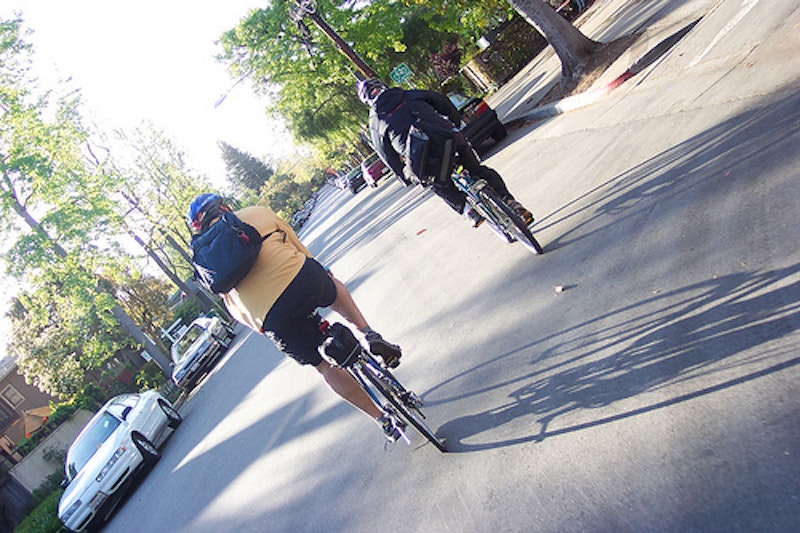 After first starting bicycling just over a year ago I expected to become one of those guys who rides a bike everywhere. Everyone would look forward to seeing me arrive on my bike, laughing gaily, perhaps toting a wicker picnic basket so that I could go up into the hills during the afternoon and think about Chopin. My bike would lean against a spreading oak as the sunset had its way with the sky, and I would sit on a checked blanket sketching in a Moleskine and sipping from one of those straw-covered Italian wine bottles. Oh, how merry life would be on my little bicycle! The clicking of its freewheel would draw crowds of laughing children, and they would run in my wake, skipping to and fro like the fall leaves that my whirring tires would catch and disperse behind me, like russet fireworks.

Well, that didn’t really work out. It transpired that my level of physical fitness led me to become drenched in sweat pretty much from the instant I see a bicycle. My original bike, a well-used late 80s Cannondale, had all the quaint charm of an electrical substation and was itself coated in a thick layer of black grease that indelibly marked any limb or piece of clothing that came near it. I was never brave enough to attach a picnic basket to the rack on the back of my bike for fear that it would alter my balance and I would fall over, which I did anyway while getting used to the clips and straps on my pedals.

After a while I bought a new bicycle, placed the Cannondale in a well-lit, pleasant hallway, and got used to riding on the road. Really it’s not that bad, at least around Princeton where drivers know that if they hit a cyclist he is likely to be a lawyer or a prominent cardiologist. Recently I moved to Iowa City for a job, and I brought the old aluminum mountain bike out of retirement to use for commuting, since I live rather close to my academic department and Iowa City is supposedly very friendly to cyclists.

Since 2008 I had improved vastly in fitness and handling skills and upgraded bicycles twice, eventually buying a fairly exalted all-carbon-fiber racing bicycle (the Specialized Tarmac, for those who are interested in this kind of thing). It’s generally considered unwise to leave an expensive bicycle locked outside for any length of time—bike locks act more as a deterrent to thieves than an actual obstacle, and bike racks are not known for being gentle on a bike’s finish or components. Carbon fiber also has a perhaps undeserved reputation for fragility. Most makers of carbon fiber bikes tell you that you must immediately stop riding the bike if you scratch the clearcoat, since it’s then theoretically possible for the carbon fiber in the frame to delaminate or go through some monstrous transformation that will result in the bike coming apart just as you pass a group of attractive joggers.

So I brought the old Cannondale, not the new ultralight performance bike, to work; imagine my surprise when I found that this bike—which is well over 20 years old, is made entirely of very stiff aluminum, and predates any kind of bicycle suspension—was incredibly comfortable to ride. There’s a raging debate in the bicycle world over frame material and comfort. The kind of people who like to talk about bicycle technology tend to be male nerds, and they hold very strong opinions, but they also generally assume that more expensive materials or components are better. This is why you can now go into a normal bike shop and spend close to $100 on a carbon fiber water bottle holder.

Conventional wisdom from these bike nerds holds that carbon is the best all around, that steel gives the best ride (whatever that means), and that aluminum is great for riders who care little for comfort and want a light, stiff, inexpensive bicycle. Back when Cannondale made my mountain bike aluminum was a rather more exotic bike material than it is today, but it’s now at something of a low ebb; people seem to prefer high tech carbon bikes or retro steel ones, and aluminum, despite its very light weight, invulnerability to rust, and incredible stiffness, isn’t really trendy anymore.

So I wasn’t expecting much when I carefully leaned my Tarmac against the wall of my apartment and took the old Cannondale out for a spin. I assumed the ride would be unrefined and coarse, the drive train sluggish, and my appearance tasteless. I would look like some schlub who doesn’t even know that you have to buy special brake pads for carbon fiber wheels, a dilettante who wouldn’t know a Pinarello from a Quiznos. Children would pursue me but only to spit on me; no place of business would let me lock my ancient silver heap outside it, I would have to nestle the bike in a pile of rat-infested garbage bags in an alley.

Except the Cannondale has a delightfully relaxed frame and big, fat, road-slick tires, and it was far and away more comfortable than the Tarmac. Cycling legend Sheldon Brown wrote years ago that tires make much more difference than frame material as far as cycling comfort goes, and boy was he right. The old Cannondale was like driving an American luxury sedan—endlessly forgiving, insulated from the road, stately and a little boat-like. Many bike commuter websites will tell you that a mountain bike is not ideal for commuting, and that you might prefer a touring bike or a hybrid; I’m sure that if I had to ride ten miles to work I might get tired of pedaling the Cannondale’s comparatively heavy frame around, but I’m starting to wonder if the skinny, rock-hard tires on most road bikes are really worthwhile for those of us who aren’t actually participating in the Tour.

This points to the widespread consumer idiocy that infests cycling just as surely as it infests any other hobby or sport. When I bought the carbon-fiber Tarmac (and I’m not sorry that I did) I was looking for something high-tech, fancy, very light, and supposedly high performance. I told myself that I didn’t care unduly about anything other than ride quality and weight; I ended up buying a very light bike with a superb, glassy ride, a precise, reliable drivetrain, a very comfortable yet sporty riding position, and a frame material that made me treat the whole thing like a Faberge egg.