Why We Resist Change

An excellent economics book explains why our shirt buttons are different, why the overnight convenience store has locks on the door, and why consistently wrong pundits remain employed. 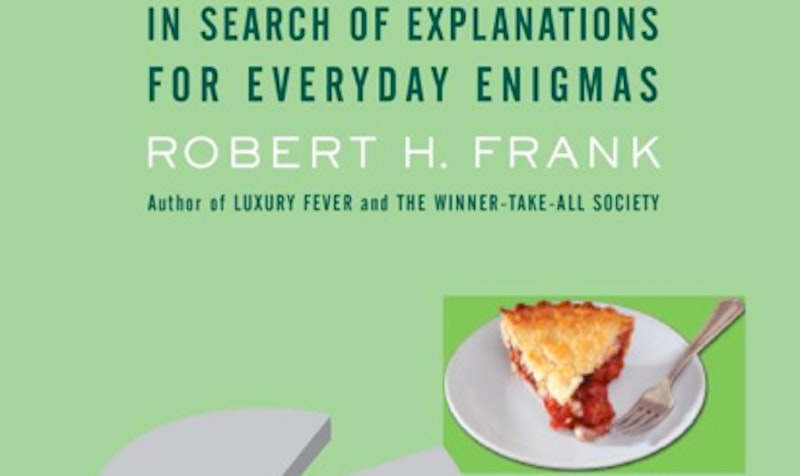 The world is filled with unanswerable questions: Why does it never rain on the days I make the effort to pack an umbrella? Why is the B train always late? And why, after his Human Events and Rachel Maddow Show racism train wreck this past week, is Pat Buchanan still employed?

For economist Robert H. Frank, seemingly unanswerable conundrums like these are not just entertaining brainteasers. They’re also a testament to the power of economics. In his book The Economic Naturalist, Frank tackles some of these questions, searching for an economic explanation for each of them, explanations so simple in hindsight that the reader is left wondering why he or she didn’t think of them first.

Why do 24-hour convenience stores have locks on their doors? Because most industrial doors are made for businesses that close at night and that therefore need locks, and to manufacture special lock-less doors for 24-hours stores would be unnecessarily costly. Why are milk cartons square while soda cans are round? Because milk, which requires refrigeration, is stored in containers designed to use expensive space as efficiently as possible, whereas soda, which doesn’t require refrigeration, can be stored in containers that don’t tessellate without wasting space and money.

When buttons first appeared in the seventeenth century, they were seen only on the garments of the wealthy. At that time it was the custom for men to dress themselves and for women to be dressed by servants. Having women’s shirts button from the left thus made things easier for the mostly right-handed servants who dressed them.
Which is all well and good, but as Frank notes, most women dress themselves these days, so why do women’s garments still button from the left? Well, Frank writes, “a norm, once established, resists change.” This particular change-resistant norm isn’t a particularly troublesome one. Sure, it makes it a little more challenging for a woman to get dressed for work, but if the biggest problem facing Western women is that their collared shirts require slightly more early-morning dexterity than those of their male colleagues, I think we can rest easy.

That said, the left-button norm has a less-than-rosy past. The idea that women were merely ornamental and should therefore wear elaborate gowns that made it all but impossible for them to dress themselves has long since died away. But the norm remains, an artifact of a bygone era and its outdated beliefs.

One of my best girlfriends, an intelligent law student, really appreciates it when her boyfriend opens the car door for her, or when he buys her flowers for no special reason. Not long ago, we were discussing the place of these kinds of chivalrous actions in modern dating. In its most common and harmless iteration, chivalry is simply “gentlemanly” behavior of the kind demonstrated by Elinor’s boyfriend. But historically, the basis for chivalrous behavior was the belief that women were inherently weaker than men, and were therefore to be protected and honored. Putting “the fairer sex” on a pedestal might have led men to fight for women’s honor, but it didn’t stop them from denying women education or selling them into politically and economically advantageous marriages, also in the name of protecting their honor.

These days, most men who behave in a gentlemanlike fashion don’t do so because they think that women are inherently weak. They do it simply because that’s what they’ve been taught to do; it’s a social norm. And as Frank writes, a norm, once established resists change.

Elinor and I disagree and of course, everyone feels differently about the role of chivalry in modern society. Personally, I never met a door that was too heavy to open by myself, and I get a kick out of the confused look that forms on the faces of some men when women open doors for them. I also think that if you’re going to open doors for women, you should open them for men, too. Elinor agrees, but while she’s economically capable of buying herself flowers for no special reason, she certainly doesn’t see the point in buying them for her boyfriend, who doesn’t particularly like flowers, all for the sake of gender equality.

I think we can agree that changing women’s (or men’s) buttons from one side to the other in the name of gender equality would be excessive. But it’s no wonder that many feminists find chivalry, with its deeply sexist history not quite a thing of the past, offensive. The belief that women are beautiful, fragile creatures needing protection from and by men, and that for their sacrifice, men will be rewarded with obedient women, is perhaps not as far behind us as we’d like to think. So it’s also no wonder that those same feminists (and I count myself among them) long for a world in which men and women, in addition to opening doors for each other regardless of gender, also extend the courtesy of mutual respect, regardless of gender.