"Vanity is the healthiest thing in life.” 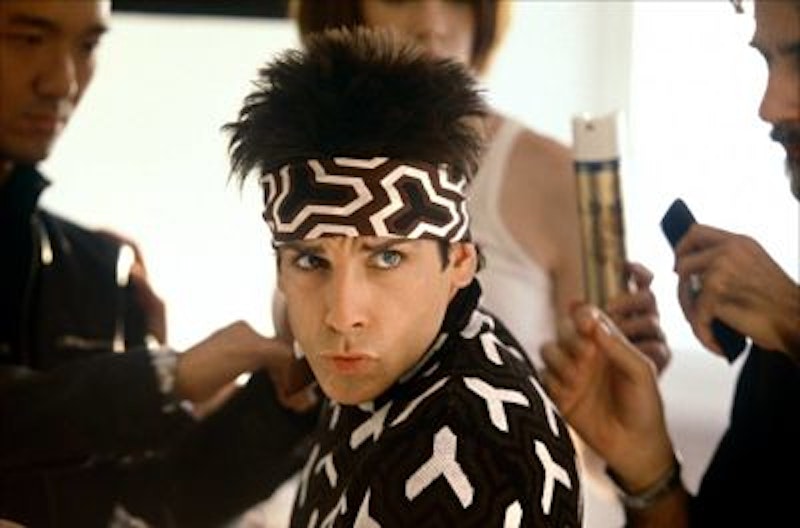 You’re young, sport "six-pack" abs and handsome, so naturally you’re considering becoming a male model. You think of the glamour, the prestige, the jet set lifestyle, and all other options seem so mundane. There will be women too—so many of them—and they’ll be models like you. You already have something few people have, "the look." The look is not available in any degree programs. It’s your gift. You may have taken the next step in advancing your career by perfecting a certain facial expression that will become a signature gaze, just as the "Derek" character in Zoolander did. Derek, as you will recall, had his "blue steel" look. Perhaps you call yours "chill 2.0" or "the pensive savage," but make it yours and yours alone. Practice it in your mirror at home and then try it out on the grocery store checkout clerk or the pizza delivery guy. See if it gets you the kind of reaction you'd hoped for. Doing that in your off hours to perfect your craft is part of what I call the ABM (Always Be Modeling) credo.

Perhaps seeing Zoolander was the inspiration for your dreams of walking the elite runways of Paris and Milan with pursed lips and a detached mien. Just as American Sniper (to pick a current example) will no doubt produce a wave of young, ambitious men aspiring to shoot people from long distances, Zoolander has midwifed many a dream of chiseled-featured lads such as yourself wanting explode onto the Haute Couture scene by making a major splash at Paris fashion week.

Most non-fashionistas—the "regular people", as we call them—interpret Zoolander as a parody of the fashion world, thinking it’s a film that makes fun of fashion's foibles and pretentions. This view lacks nuance, as the fashion world has neither foibles nor pretentions. There’s nothing there to parody. A more sophisticated take on the film—one that comes from a "behind the seams" vantage point—is that Zoolander more closely resembles a straight ahead drama depicting the everyday reality of life in the world of high fashion. For the fashion world cognoscenti, Zoolander provides no laughs, but rather "knowing smiles." Yes, the part about the model Derek being brainwashed to kill the Prime Minister of Malaysia is somewhat over the top, but the serious point the film is trying to make with this plot twist is that cheap child labor in Third World nations is the lifeblood of the fashion industry. If the Malaysian PM, or any such despot, were to try to outlaw fashion's job creation program in their countries they must know that the fashion industry is like a swan—outwardly beautiful but vicious and unrelenting when attacked.

If you’re seriously thinking of making a career out of male modeling, I’ll assume your ultimate aspiration is to sashay insouciantly at a fashion show for the iconic Karl Lagerfeld, head designer at the fashion house Chanel. Yes, the Karl Lagerfeld with the gloved hands, powdered white hair, perpetual dark glasses and high collar. An opportunity to walk down the runway sporting Karl's new creations is coveted among male models, with the exception of one. If you somehow are able to ascend to the very pinnacle of Haute Couture, you will find yourself by Karl's side as his muse. As such, you will be exposed to Karl's creative process in the most intimate way imaginable. Karl will actually be thinking out loud to you about the inspirations that pass steadily through his fertile mind. Your very presence—your reaction (or lack thereof) to Karl's musings—will have a direct impact on his forthcoming couture innovations that will stun the usually jaded world of fashion when they’re revealed.

Your job as Karl Lagerfeld's muse will entail much more than serving as a sounding board for his steady fusillade of ideas. Fashion is often brushed off as a trivial and shallow endeavor, but on the contrary it’s one of the highest callings known to man. Think of fashion as the embodiment of free speech, as it is through what you wear and how you look that you express your essence to the world. The instruments that fashion employs towards its ultimate goal of promoting free expression are clothing, hairstyles, accessories, and jewelry. Karl Lagerfeld is the helmsman navigating the rough seas of free expression. If he succeeds, all of mankind benefits. Your job, as his muse, will be to steady Karl's hand through the most challenging passages. Your responsibilities are massive.

Taking seriously his role as uber-spokesman for the fashion world and always wishing to remind the "regular world" that fashion represents big ideas, Karl weighs in regularly on cultural and societal issues. As his muse, you must be conversant in these topics in order to hold your mentor's respect. Music is one field that Karl goes on about, making the trenchant observations that Adele is a "little fat" and that Seal has "bad skin." On the subject of personal appearance, Karl has stated he "hates" ugly people and finds them depressing. Moreover, he feels all Russian men are ugly and that he’d be a lesbian if he were a Russian female. Karl is also on record as feeling that having an "ugly daughter" would be difficult. On feminism, Karl offers that Coco Chanel wasn't a feminist because she "wasn't ugly enough for that." Were you to become Karl's muse, he might expect you to do much more than look all pouty while he ruminates. Karl would expect you to engage with him and become an integral part of his revelatory process.

The point I’m making is that maybe you were "discovered" one day in a gym—or the grocery store or a club—and you eventually made your way up the ladder to become a successful male model based on your good looks. If you’re now at the point of sitting cat-like next to Karl as he gestates what he calls his "Karlisms," you must step up your game. You can no longer rely on your natural gifts which, while they may now allow you cut in line in front of the regular people at restaurants, clubs and perhaps even the DMV, will not suffice if you’re to remain at Karl's side for any length of time. Karl is notorious for his short attention span, and if you cease fulfilling his exacting criteria you could find yourself cast aside for another more fascinating male model.

The more skills you have, the more knowledge you possess, the better your chances of beating out the merely attractive contenders for the highly competitive muse position. Consider studying a martial art, making sure it’s one that doesn’t put your face in danger. Karl has expressed concern for his physical safety in public, even complaining that while in Japan that Japanese women pinched his ass. Karl has also publicly stated that he despises short, ugly men. Having the physical skills to provide Karl with security and keep these unattractive diminutive men away from Karl while also preventing future violations of his derrière in Japan would set you apart from the run of the mill runway hunk.

While you're building your resume for Karl, why not go easy on Tinder for awhile and pick up a few books? Let's say Karl were to speak vaguely of a new fashion line he was toying with based on the confinement garb of Aung San Suu Kyi while he gently stroked the back of his beloved cat Choupette. Would you even know who Aung was? No, I didn't think so. What if Karl mentioned the PETA folks who have protested his fur fashions? Karl has said that these are "ugly" people interrupting "beautiful" people. Would you have sufficient knowledge of the topic to thoughtfully discuss it with Karl as he prepares to intone sagely on it?

You must strive to have your finger on the zeitgeist. Karl needs your youthful perspective, and you must be firmly in the present. Karl strongly believes that people who dwell on the past too much de-value the present. Do little things that Karl will appreciate. Feed him regular tidbits of gossip. Buy Choupette a luxurious little gift now and then (Warning! Karl stole Choupette from another muse, so beware). Identify a celebrity who has a physical flaw and share a secret, and naughtily laugh with Karl about it.

I’ve offered you a template to achieve a position in Haute Couture that very few dare dream of. All you need do is to work hard and apply my ideas and the dream could be within your grasp. Remember, you’re already extremely good-looking. The road to El Dorado will be arduous and bumpy, but when the day arrives and Karl finally lays his gloved, avuncular hand on your shoulder and thanks you for your contribution to his latest Karlism you will know all your hard work has been rewarded. You are then, and only then, finally allowed to look in the mirror and admire the chiseled cheekbones and wide-set eyes that put you on the path to your long sought-after destiny. Remember, Karl has said, "Vanity is the healthiest thing in life.”