Burning up, burnt out, coasting aimlessly along. 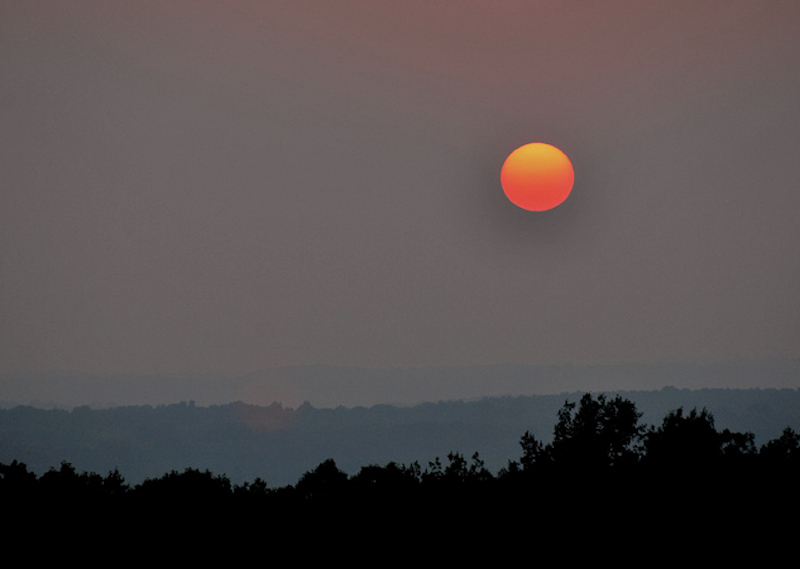 In one of several science-fiction anthologies I fetishized as a teenager, there’s a short, brutish end-of-the-world story. The tale is told from a third-person omniscient perspective and follows a businessman in a major American city center who is traveling to an appointment when, with a paralyzing suddenness, buildings begin to crumble, people burst into flame, metal objects sizzle and melt. Everything collapses, consumed by unyielding waves of heat, and it all happens so quickly that there isn’t time to register fear or regret or to intellectualize anything as Earth’s orbit send it into or to near to that of the Sun or a star; the story was only a handful of pages long, but left a lasting, indelible impression.

It isn’t too difficult to draw parallels between this story and the summer we’re presently suffering through on either meteorological or Biblical levels. Disintegration is in the air: a sense of things slowly coming apart or pooling at our feet. Harsh, triple-digit temperatures compound the lethargy this season usually inspires anyway, color and vibrancy fading from surfaces and experiences alike until all curls and smolders. The latest succession of pop standards and the freak-show horrors of America’s Got Talent are lost in the chatter of fans and air conditioning systems; trailers for comedies and trailers for big-bang action films feel interchangeable. It takes real, discernable effort just to move, let alone think or create or pour another glass of lemonade.

Shade your eyes and take a look outside: the streets are free of bicycles, laughter, blood from skinned young knees, cul-de-sacs still as tombs. The space shuttle program is a fading memory; roadways are crumbling, prodded by the perpetual heat; the President has cast aside any aspiration to inspiration, and has accepted his role as steward of the Titanic. The Republican race for the presidency is a joke right now, which doesn’t bode well for the our polity, despite what some liberals interpret as a boon (I’m one.) National insolvency as unassailable fact—and the failure of our leaders to arrive at a cooperative solution—is less alarming than the realization that we’ve been impassively building to this crossroads with total indifference or an expectation of divine intervention. ABC’s improbably chipper “Made In America” news segment offered a partial answer as to why. (Last night, an economist advised investors to put their money in stable European stocks, driving home just how far we are from Kansas.) When rhetorical comparisons are drawn between the Roman Empire and ours, one must dig deep to summon the strength to care, let alone the strength to argue. And the blistering, ungodly heat? That’s the global warming so many are eager to disavow for political purposes. Everything, it seems, is corrupt, corroded, and broken—and that’s even without even looking beyond our own sun-baked shores and borders.

It’s tempting to blame this worldview on some variation on Jean-Paul Sartre’s notion of “nausea," on some personal malaise. But I think that that’s too easy an out. There’s a growing feeling—never quite articulated in common discourse—that we’re near or close to the end of something. No, this summer isn’t the end, I don’t think: maybe just a preview, a foreshadowing, or a taste of endings to come, of charnel our forefathers prayed we’d never see.