I’m glad a troublemaker like Michael Wolff is around in today’s debased, preach-to-your-base media environment. 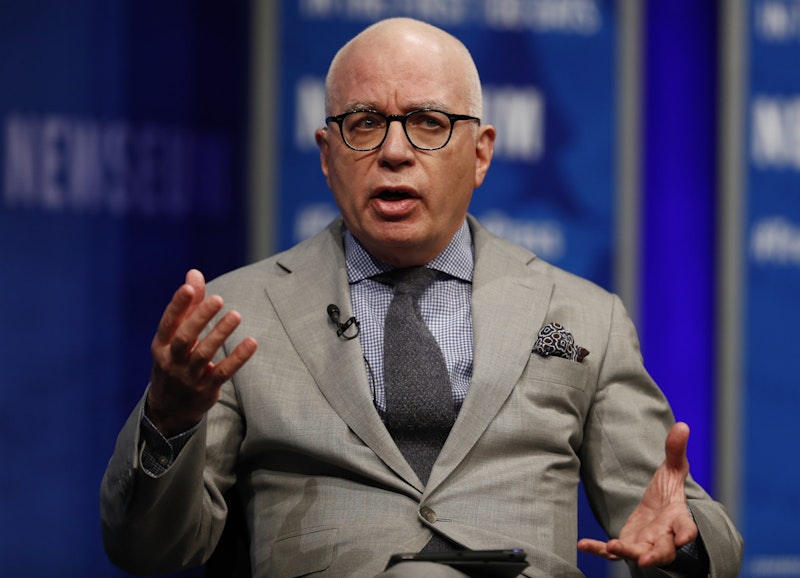 I haven’t read any of the three books that Michael Wolff’s written about Donald Trump. That’s not a slight of Wolff, whom I like a lot—and I admired several of his previous books, especially his 2008 biography of Rupert Murdoch, The Man Who Owns The News, easily the best bio of the now 90-year-old publisher, who may live to the age of 120—but my own refusal to waste time consuming any long article, let alone a book, about Trump. I’ve no doubt there were many morsels revealed by Wolff—and it’s one more testament to the ex-President’s ego (surpassing even Barack Obama, whose “post-presidency” is devoted to making a lot of money, schmoozing with celebrities and doing zilch to help the Democratic Party) that he’d give access to a writer he reportedly hates—as my son Nicky, who read Wolff’s first of the Trump trilogy Fire and Fury, confirmed. I was fairly agnostic about the 45th chief executive (the major exceptions his initial bungling of the pandemic crisis, which surely led to Joe Biden’s election, constant lies, grotesque appearance and stoking the current hatred of immigrants) the media never let go of Trump from 2015-2021, but I’d had my fill. In fact, the last book about contemporary presidential politics I read was What It Takes, by the late Richard Ben Cramer, which came out in 1992, a 1000-page dissection of the ’88 election; that the book was a page-turner four years after that election was an indisputable verdict that Cramer’s effort will never be bested.

I did look at Wolff’s “guest essay” in The New York Times last month, “Why I’m Sure Trump Will Run for President in 2024,” even though it was product placement for his latest, Landslide: The Final Days of the Trump Presidency. (That the Times published this advertorial, especially by a writer you’d expect the paper’s hierarchy to despise, has two explanations: the company, as always, desired the guaranteed digital traffic it’d generate, and anything that gives off the whiff of anti-Trumpism receives an automatic thumbs-up.) Wolff’s prediction is self-serving—another Trump run will line the author’s pockets even further (and good for him, I say, since he’s one of the few media survivors who has something to say), and, if by some chance Trump wins in 2024, well, Wolff might be given an office at the White House to continue his series—but I did enjoy his description of parrying with Trump over dinner last spring at Mar-a-Lago. Too bad there wasn’t a line or two about the menu. (Wouldn’t it be a riot if Trump’s chef served caviar, sauteed sweetbreads, fish caught 90 minutes before dinner, an array of cheeses and a sharp sorbet? And maybe a vintage bottle of wine: I’m on the fence about whether or not Trump drinks.)

Wolff’s conclusion: “For Democrats, who see him exiled to Mar-a-Lago, stripped of his key social media platforms [Twitter’s a lot more boring since Trump was tossed off the site, the company taking the “high road,” instead of allowing its premier performance artist annoy and delight its users every day] and facing determined prosecutors [fat chance of a conviction; if indicted Trump will run out the clock with counter-litigation, and if he ultimately loses, no judge will send a man in his 80s to jail, absent a homicide], his future seems risible if not pathetic. But this is Donald Trump [Wolff’s Elsie the Cow], always ready to strike back harder than he’s been struck, to blame anyone but himself, to silence any doubts with the sound of his own voice, to take back what he believes is his and, most of all, to seize all available attention. Sound the alarm.”

I hope, and believe, that Wolff is wrong, for several reasons. One, a Trump campaign that recaptures his implausible fantasy-come-true from five years ago, would be awful for the Republican Party, and likely guarantee a victory for Kamala Harris. Two, witnessing Biden’s daily incoherency, who needs another president who’s close to 80? Trump may not have Biden’s apparent cognitive disabilities, but he’s a unique kind of crazy that’s played out. Three, and this is relatively minor, it’d give life to the small D.C.-based cadre of neocon #NeverTrumpers, whose sanctimonious denunciation of Trump and his “threat to democracy” is more annoying than Trump himself. Finally, as the months roll along, the Trump influence is receding (despite what the media, ever-addicted, says) in most of the country, save for the pockets of true believers who still think last November’s results can be overturned. As cults go, this one gets less and less compelling every time Trump opens his mouth with scabrous attacks on Ron DeSantis, Mitch McConnell and Brett Kavanaugh. Not a patch on Jim Jones and David Koresh.

As noted before in this space, there are few journalists today that I take seriously: people like Dana Milbank, Ezra Klein, Margaret Sullivan, Andrew Sullivan, Glenn Greenwald, Karen Tumulty, Paul Krugman, Jonathan Chait, Ross Douthat, Rich Lowry and on and on and on, are gasping for relevance, even while some of them are well-compensated. None of them possess Wolff’s elan, his desire to upset the media establishment, his I-don’t-give-a-fuck-who-gets-pissed off attitude, and while he disappears from the public for long periods of time now, at nearly 70 he hasn’t lost any of his joy for creating trouble. Wolff was lambasted years ago for breaking the cardinal rule of the elite media by attacking “luminaries” like the late David Carr, Frank Rich, Tina Brown, Graydon Carter and every dipshit magazine that for six months paid for “buzz.” Critics claimed Wolff made up quotes, used his New York column to exact revenge and was sort of nuts. The media needs more such “nuts” today, but the managements of large websites have no imagination.

Wolff wrote 300 columns for New York over six years, starting in 1998 (and was fortunate that his bid to buy the magazine fell short) and once I was the subject of his 800 or so words. (He must’ve been hard-up for copy.) He casually walked into my New York Press office and we talked for an hour or so, and it was striking that he didn’t record the conversation or even take notes. Yet despite one or two mistakes, what he wrote was largely accurate, probably because he did his research ahead of time and was just looking for atmosphere to fill it out. A minor NYC media figure in the 1990s, I was the subject of 20 or so stories; none were as compelling as Wolff’s. He was also very enjoyable company on the few occasions we socialized, whether going out for dinner on a few occasions, or taking in a show.

I’m pleased that Michael Wolff has flourished in the current media desert: the man has survived professional ups and downs—a failed Internet company, the website Newser, an ill-fated Adweek stint—and now has cornered the Trump market.