Why Abby Sunderland is better than you'll ever be 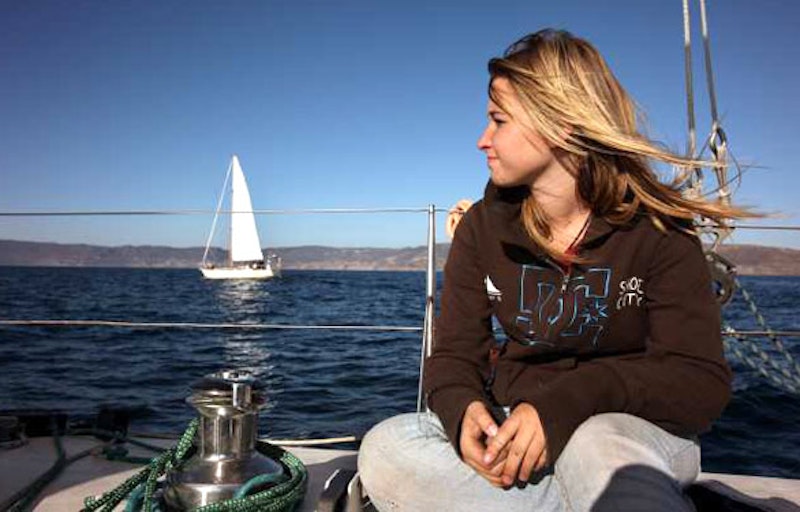 By now, you’ve read all of the news bits about Abby Sunderland and her one-girl journey around the world on a boat manned only by herself and whatever it takes to blog while you’re in the middle of an ocean. She became lost somewhere around Madagascar for a day or so, emergency beacons went off, people got scared, and then she was found alive and well and afloat. These things happen.

What’s disturbed me the most about this story is not that a 16-year-old girl would be permitted to take such an adventurous, perilous journey on her own, because adventure is something which I completely stand behind, even if I can't afford a boat of my own on a pathetic librarian's salary. What I'm alarmed by is the reaction to this event from the public. Using the ever present Internet thermometer of Digg, a few popular opinions have been made very apparent: her parents are idiots, Abby is spoiled, and of paramount importance, it was a colossal waste of resources to hunt down a single boat in the middle of an ocean, even if it has a 16-year-old girl on it.

Obviously, I don’t agree with any of these statements. Here’s the thing, Internet: you can sit on your ever-widening ass watching reruns of Lost and Real Bitches of Wherever-The-Fuck, and when you finally get bored of watching things happen on TV, you can kill yourselves, or you can go out and try to do something new. There’s nothing more infuriating than listening to criticisms aimed at people who have tried interesting things and failed—especially when these attacks are delivered by people with ridiculously limited initiative themselves. Since when did stepping outside of expectations become such a ridicule-inducing offense? And when did having a level 80 World of Warcraft character equate to a workable, real-world skill? I don't see you out there hunting warthogs.

If there’s a singular statement that sums up the entirety of human mediocrity and why we’re on a fast path to self destruction, it is this:

“They must have had a lot of time on their hands.”

Scan the Internet for anything that describes something really complex, inventive or innovative, and you’ll find a similar statement in the associated comments section.

Most of us do not create out of boredom, or because we’re a creepy race of beings who lives among you extracting 37 hours from any given day. We create because of initiative, and we forge time in our already busy lives and around other powerful ideas to create beautiful feats of ingenuity or aesthetics. You see a 12-foot tall statue made out of toothpicks and a bored guy, and I see a man with intense focus and dedication who probably has more to say than you’ll ever know. When inventiveness is turned into a crime, we have nothing left.

Abby Sunderland has more balls than me, than you, and than a majority of our population. So, when you say something like this:

“I sincerely hope the parents will have to pay for ANY and ALL rescue attempts for this stunt. You know, coming to the rescue of a ship or airliner with passengers aboard that was performing a public function is one thing, but having to rescue idiots intentionally tempting fate (such as this), is simply not responsible.”

I can't help but feel a little sick. Life is expensive. Testing the human spirit and our boundaries as a potentially doomed race of creatures is expensive, but nothing that is ever done, erroneously or intentionally, is a waste—provided that you understand it, and take the time to build from it. We're not talking about a Balloon Boy stunt here, done in the interest of arrogant fame-seeking, so to treat it the same way is ridiculous. While Abby Sunderland might not be teaching gerbils to use an abacus in space, there's something powerful in the fact that even one person is willing to shut herself off from the angry world that we've created to visit places that most of us will never see.

When we understand why, I think there might be hope for us yet.