Over Here, Over There

We need better ways to support the troops. 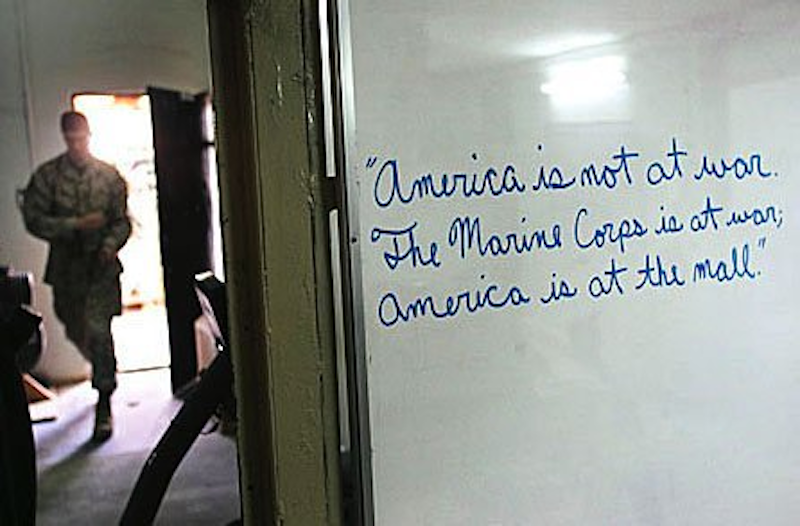 Commemorate the dead. Return fire. Launch mortars. Treat the wounded during battle. Call in air support. Call in MEDEVAC. Hold your ground. Protect the reporters. Hydrate. Mind the heat. This is what one of my best friends is going through in Afghanistan right now. I know this because his unit just appeared on MSNBC engaged in a brutal firefight with insurgents (or the Taliban or whoever we’re fighting right now). It’s hard enough to watch stuff like this when the soldiers are strangers, an invisible wall of Over There protecting me from true, painful empathy. I’m Here. They’re There.

But when it’s my friend, it’s different. He’s literally there, one of those anonymous faces moving in and out of MSNBC’s haunting images. I watch that video and it shakes me. The stories he’s told me over satellite phone, over the Internet—they’re just words in the air, folk tales from a distant land. But when I see him living it, it all comes to life around me. I smell the Indian countryside—the closest analogue to the plains of Afghanistan my memory can conjure—during the festival of Diwali, the stench of stale gunpowder from two consecutive days of fireworks. I can’t smell the blood, the dead. But I feel the awful heat. I hear the shouts from the video, the bursts of fire. I imagine his patrols, his nights awake, because now I have images.

When it comes to our country’s Afghanistan policy, I think I agree with the parameters—either stay for the long haul and do it all the way or get out now—but have no idea upon which side I fall. A few weeks ago, I saw a talk with Dr. Abdullah Abdullah, the Afghan presidential runner-up, making a plea for prolonged American engagement in the region. Yet, current President Hamid Karzai already seems to be planning for our departure. There is no consensus anywhere. Even my friend goes back and forth, some days thrilled by the reception of the good work done for Afghan communities, some days hardened by the constant cycles of violence.

I feel helpless and useless. The Gulf oil spill produces a similar emotion: I don’t live in the Gulf, I’m not an expert, and there is very little I can do to plug the hole right now, but at least I see an end there. Eventually, after much destruction, the well will dry up. I can volunteer to help relief efforts taking place in the affected regions (or at worse, donate money). On a macro level, I can further cut back my oil consumption, drive less, buy less stuff, and ease up on the A/C and heat. I can support a gas tax or other anti-oil measures, no matter the potential economic hardship this may entail. But I don’t know what to do for Afghanistan.

There are little things, of course, like sending e-mails, letters, or care packages. I can send books or coffee or sundries from a chain store. It seems so irrelevant and inconsequential, though, like giving someone a quarter when they’re asking for a job. Beyond these tiny, ephemeral acts of kindness, I can think of little to do aside from paying taxes and lip service to “supporting the troops.” What I really want is one of our leaders, President Obama, Vice President Biden, anyone from Congress, to tell me what I can do as a citizen.

With so many problems to tackle at home—the oil spill, the ongoing poor economy, climate change, health care upheaval, financial reform—the war seems to have taken a back seat. A few weeks ago, The Atlantic’s James Fallows wrote about the absence of ROTC on Ivy League campuses and the potential for disconnect between civilians and the military. A reader responded with a chilling image, a military eraser board with the handwritten words: “America is not at war. The Marine Corps is at war; America is at the mall.”

Since coming across that picture, I can’t shake loose the mess of emotions it stirred. Short of enlisting, I can’t think of ways to earnestly contribute to our war effort aside from just paying my taxes. There has to be something else. Everyone supports the troops in theory, but I find that we haven’t been asked to do very much to support them any other way as individuals. Yes, we pay their costs, but that blank check may not even be necessary or productive.

I think people care enough about our soldiers that an extra portion of their time and money could easily be mobilized by clever governance. Whatever they need Over There, help building infrastructure, more socks, a couple more tanks, can be done with better communication between the military and the public, a call for a “Support the Troops” tax, a nationwide civilian volunteer drive (a government-sponsored Habitat for Humanity), something separate that won’t cut into the desperately-needed funds for healthcare, education, and infrastructure. I don’t know what’s feasible. But we need to do something. The shared feelings of guilt, resentment, helplessness, and hopelessness on both sides of the divide—these are not ways to stand strong and united as a nation and as a military at war. And we are all at war.