A grim reality is distorted by fatuous rhetoric. 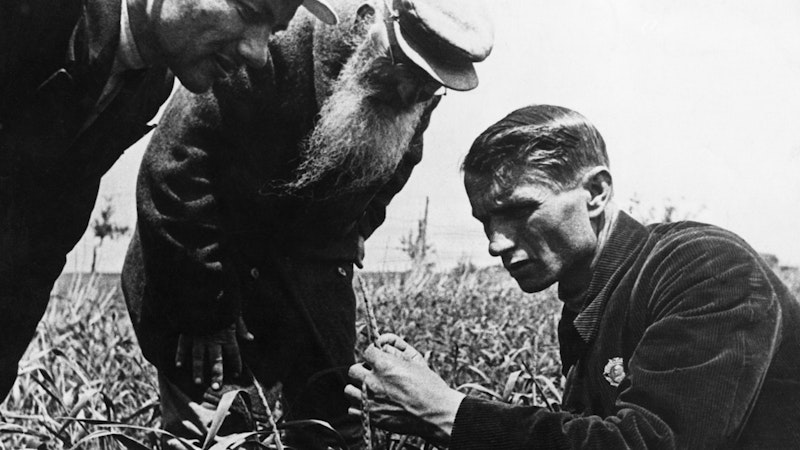 My grand-aunt Charlotte, whom I knew during summer visits to her home on Maryland’s Eastern Shore in the 1970s, saw human bodies hanging on meat hooks in the Soviet Union after World War I. These were enemies of the Communists, and a sure sign that she and her fiancé Melchior should get out of there. Melchior, a German-speaking Russian of the Volga community, had been conscripted into the Czarist Army and then captured and brought to Germany, where he met Charlotte. Unwilling to believe stories of atrocities in Russia, he’d insisted on visiting his homeland after the war, only to find the reality even worse. He was detained for a time, and then they fled the country. Charlotte was shot by their Communist pursuers, an injury that left her unable to have children.

I never heard this story from Auntie herself, but it was passed down on my mother’s side of the family. No doubt, Charlotte’s experience was a factor in the family’s staunch anti-Communism, as was the fact that relatives left behind in what became East Germany lived in deprivation and were not allowed to leave. At one point, likely in the 1960s, my mother and grandmother wrote that they’d send some hand-me-down clothing to relatives there, and when they didn’t follow-up promptly, found the relatives were upset, as this gift had been anticipated with urgency.

I’ve written previously about my father’s family’s flight from Nazism and the extended family’s destruction in the Holocaust. I’ve little patience for any who downplay the brutality of Nazis, Soviets, Fascists, Maoists and others who turned the 20th century into a charnel house. I’m sympathetic to the “horseshoe theory” that sees totalitarians at supposedly opposite ends of the left-right spectrum as having a great deal more in common than what separates them.

American political discourse has long been debased by the use of false ideological labels to attack political opponents. That such claims now emanate from an ex-President is a sign of further degradation. “Great job by Kevin McCarthy last night, setting a record by going 8 hours of speaking on the House Floor in order to properly oppose Communism,” wrote Donald Trump, praising the Minority Leader for delaying the Build Back Better bill. McCarthy’s speech’s relevance to Communism was encapsulated in an inane reference to the movie Red Dawn. “A communist should not be comptroller of our currency,” was Sen. Marco Rubio’s recent contribution to such worthless rhetoric, in a tweet opposing Biden nominee Saule Omarova.

There’s a curious review in The American Conservative, by John M. Vella, of a book by Paul Gottfried, Antifascism: The Course of a Crusade. The review notes—correctly, in my view—that the term “fascism” is thrown around by some leftists as a pejorative with little connection to its historical meaning. Vella then writes: “The antifascist left smears their ‘fascist’ opponents with the Nazi and anti-Semitic label. However, fascism and Nazism are not identical.” That’s true enough, though what follows is not reassuring: “Mussolini’s embrace of German-style anti-Semitism in 1938 was a dramatic departure from longstanding fascist practice. Despite his authoritarianism, Il Duce was considered a leftwing reformer until his alliance with Nazi Germany. Members of his cabinet were vocal critics of Hitler.” He goes on to note: “Mussolini’s mistress was a Sephardic Jew.”

Odder than this attempt at a partial whitewashing of fascism, however, is Vella’s negative comparison of today’s antifascists vis-à-vis old-time Communists: “Unlike the modern left, traditional Marxists prioritized the welfare of the working class against bourgeois owners of capital. They didn’t deny human biology, oppose national borders, or cavort with a globalist ruling class. They would’ve identified the lifestyle revolution of the modern left as evidence of Western decadence.” Mark this passage as evidence for the horseshoe theory.

The Soviet Union embraced false notions of human and other biology as extensively malleable; this reached an extreme in the crackpot doctrines of Trofim Lysenko. The U.S.S.R. trampled national borders in Hungary, Czechoslovakia, the Baltic states and other countries. As for cavorting with “a globalist ruling class,” Soviet leaders did so as they saw fit, from the Yalta Conference to Nixon-era détente, and routinely had access to luxury goods and other products from the West that were unavailable to Soviet workers.

Some months ago, I saw the movie 1944, a war drama made in Estonia in 2015. In it, Estonians are forced to fight other Estonians, at the behest of one side or the other in the larger Nazi-Soviet conflict. The soldiers have little enthusiasm for the foreign leaders battling over their country; at one point, an official of the Nazi puppet government shows up to hand out commendations to jeering troops. The movie opens with a unit on the Nazi side and later shifts to one on the Soviet side, but there’s a continuity as they fight for causes not their own.