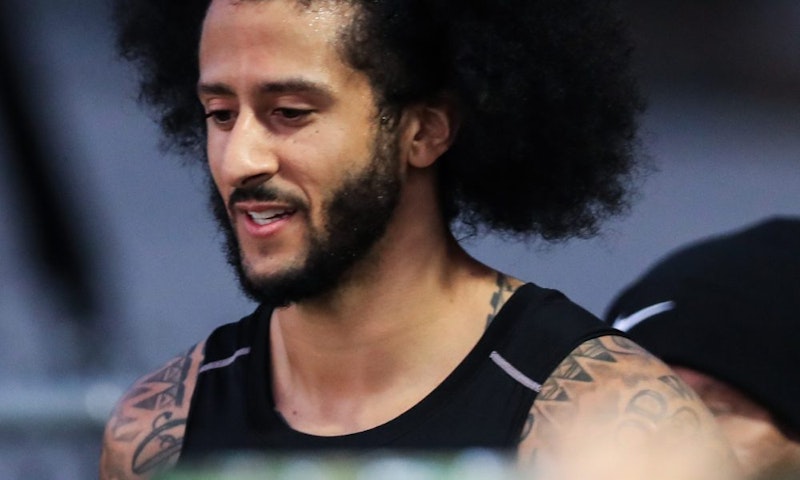 The NFL and Colin Kaepernick are like a bitter, estranged former couple that now only communicates through lawyers. The league set up a workout for him recently, but not because it cares about his job prospects—avoiding a second lawsuit brought by the former 49er quarterback was the probable motivation. Predictably, things went haywire when Kaepernick, 32, showed up at the designated venue, so he moved his audition to a nearby high school, where he threw long passes clad in a Kunta Kinte t-shirt.

No team has yet followed up with a phone call (according to ESPN) because, even though Kaepernick's arm is still strong, team's don't value his skills enough to take on the negatives he brings with him. There's doubt that Kaepernick even wants to suit up again, and it goes well beyond his showing up at the job fair and seeming to compare himself to a well-known slave. He's not starting QB material anymore, so becoming that backup player on the sideline carrying a clipboard would strip him of his currency—martyrdom—and he'd fade into obscurity. But there's plenty of Kaepernick supporters who reject this scenario, including "grievance scholar" Ta-Nehesi Coates, who made his case in a New York Times op-ed.

Coates' piece, while high-toned and elegantly written, is airbrushed—retouched to hide the blemishes that an objective evaluation would reveal. It's a pamphleteer's rendition of a two-sided controversy. There's also the question of how deeply the author understands the complexities of the matter, such as when he calls the NFL "a paragon of patriotism and chivalry." The patriotism, maybe, but chivalry? What games is Coates watching when he sees gallantry and courtesy?

Coates tries to make the case that, despite what conservatives claim, cancel culture isn't just a left-wing phenomenon. He tells us that the NFL canceled Kaepernick, but it's not that simple. Louis C.K. got canceled and now he can't work anywhere, even though he's presumably just as funny as he used to be. Had Kaepernick also been at the top of his profession before he started talking a knee during the national anthem, a team would've long ago given him a second chance. The guy Coates is defending didn't get cancelled—he just made himself a worse job candidate, for reasons that he doesn't mention because they interfere with his narrative.

Coates writes that Kaepernick's "sin" was refusing to stand for the national anthem, as if the quarterback didn't once also wear "pig" socks mocking the police during a practice session. And then there was the time that, while the Baltimore Ravens were pondering signing Kaepernick, his girlfriend tweeted a photo comparing Ravens owner Steve Biscotti to a slave owner. By this time, Kaepernick had already asserted on Twitter that police officers are modern-day slave catchers.

It's not clear why Kaepernick has chosen to push the slavery angle, but not difficult to understand why NFL owners would be loath to hire someone who might one day point his accusing finger at them if things turned sour. Given this reasonable fear, why would it then be worth it to hire a backup quarterback who might not even take a single snap the entire season?

This entire Times column is written as if the NFL should reflect the imaginary progressive Utopia where every leader, institution, and business exists to nurture diversity and further every single cause under the social justice tent. Coates writes that the league has chosen to retreat into a "dissembling fog" over "building egalitarian institutions capable of withstanding public scrutiny." Neither the NFL, nor any business, will ever become immune to the kind of public scrutiny that's contributed to Kaepernick's job search difficulties. And the NFL, with 68 percent of its players being black, is a true meritocracy where race is inconsequential. It's one of America's more egalitarian institutions.

Coates' piece concludes: "This isn’t a fight for employment at any cost. It is a fight for a world where we are not shot, or shunned, because the masters of capital, or their agents, do not like our comportment, our attire or what we have to say." By "our," he's referring to black people in general, without providing a shred of evidence that a white Kaepernick would have a job by now. By "attire," he means Kap's Kunta Kinte shirt, as if people of any race should be able to show up for a job interview wearing whatever they please and employers shouldn't judge them.

Coates has no interest in providing a cogent analysis of a complex situation. Instead, he carefully tailors his argument into yet another story of how the "masters of capital" oppress a minority group because they dress wrong or don't behave like the majority does. There are plenty of facts to dispute this narrative. Ta-Nehesi Coates deals with the other side of the story by simply ignoring it. His track record shows that that's a winning proposition for him.