Fun to talk about, but it’s not going to happen. 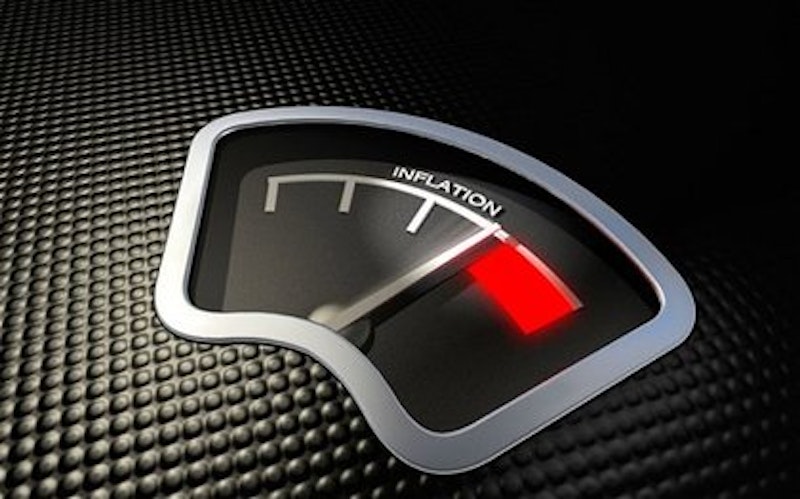 During World War I, Germany borrowed massively and took its currency off the gold standard. After the war, borrowing continued, in part because it was politically difficult to raise taxes when the public knew the money would go to pay for reparations that most Germans considered unfair. The result was rampant devaluation of the currency. In August 1922, according to Richard J. Evans' The Coming of the Third Reich, the currency was at 1000 marks to the dollar. By October, it was 3000 marks to the dollar; in December, 7000 marks; in January 1923, 17,000 marks; by July 353,000. By the end of the year, the number was up to 4.2 trillion marks per dollar.

Employees had to get their wages in wheelbarrows; as soon as they were paid they rushed to shops before the money was completely worthless. Food prices in particular shot up spectacularly; a kilogram of bread cost 163 marks in early January 1923, and 233 billion marks on November 19. At the worst period of hyperinflation, 90 percent of a typical family's income went to food. The uncertainty and resentment created by this nationwide disaster undermined trust in the Weimar government. It paved the way for the Nazi electoral victories, World War II, and the Holocaust.

Or at least, that's the popular story, and the one I learned in school. In fact, the hyperinflation ended in 1923. The Nazis didn't make major gains in the Reichstag parliament until 1930. The immediate source of their success wasn't hyperinflation, but the Great Depression. Hyperinflation certainly didn't help the standing of the Weimar Republic, but it was worldwide economic recession, and, in particular, widespread unemployment in Germany which were the more immediate cause of Hitler's rise to power.

The emphasis on inflation in the rise of Nazism is, therefore, massively overstated. But that overstatement isn't exactly unusual. Paul Krugman has railed often (for example here) against the fact that some economists continue to predict economic doom via inflation despite the fact that it’s has been low for years, and shows no signs of ramping up. Rep. Paul Ryan, he points out, warned about the dangers of inflation in 2009. Inflation didn't show up. But Ryan didn't change his predictions; he's still saying we need to watch out for it. The same thing is true of non-politicians, like economist Allan Meltzer, who predicted dangerous inflation in 2009… and predicted the same thing five years later. Inflation, it seems, is always the danger; it's always waiting just around the corner to get us.

Krugman blames this in part on the fact that inflation hurts the rich: "Inflation helps debtors and hurts creditors, deflation does the reverse. And the wealthy are much more likely than workers and the poor to be creditors, to have money in the bank and bonds in their portfolio rather than mortgages and credit-card balances outstanding," he argues.  He also suggests that the issue has become polarized, and inflation has just become a right-wing talking point in our overly partisan political system.

Krugman may be right to some degree, but his arguments don't really explain why we blame the Nazis for hyperinflation.  The popularity of the Nazi hyperinflation story long precedes our current partisan moment. And most people who find those stories interesting, shocking or memorable aren't rich creditors, but just people who can imagine what it would be like to go to the store and find that the price of bread has jumped by a billion.

And I think that may explain inflation's popularity as a bogeyman. People tend to be fascinated, or scared, by the unusual or the notably odd. Traveling by plane is significantly safer than traveling by car. But people are scared of flying precisely because airplane crashes are spectacular and unusual. The very fact that airplanes are safer makes people pay more attention to airplane crashes, and worry more about airplane accidents.

Something similar is happening with inflation worries. Hyperinflation is really unusual, and therefore stories about it are spectacular and gripping. Even less shocking examples than the German one—like the U.S. experience in the 1970s—seem noteworthy, strange and compelling. Unemployment and poverty, on the other hand, are commonplace precisely because it is commonplace. Economic downturns roll around with some regularity, and can linger too—the crash in 2008 was certainly spectacular, but the lingering "recovery,” with stagnant wages and people scrambling to feed their families and make ends meet, doesn't have the kind of narrative "wow!" of wheelbarrows full of cash. We focus on inflation because it’s a more entertaining apocalyptic story than the alternatives. Which wouldn't be a problem, except that the tight money policies that are supposed to prevent inflation can also make it difficult to address the economic slowdown. Preparing for the rapture of high bread prices can be an unfortunate distraction from all the people, right now, who can't afford bread.