Thoughts for Your Convoy Drive

It’s confusing even without a big rig to keep an eye on. 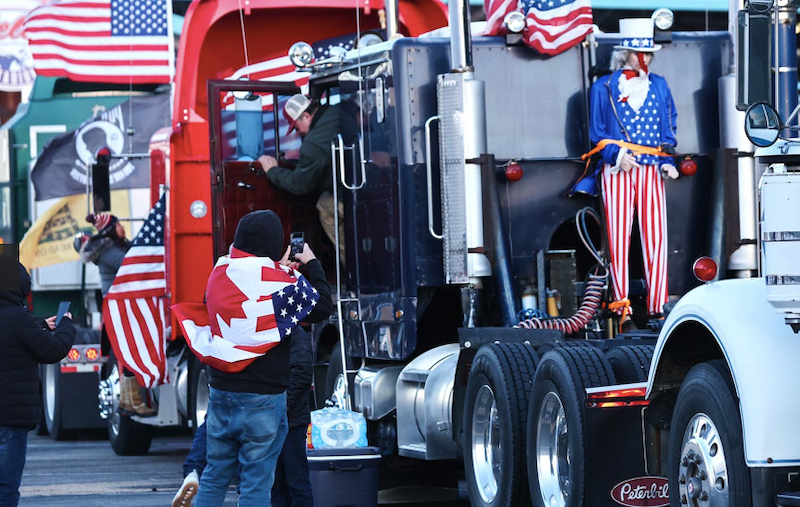 I don’t know if much will come of that U.S. version of the truckers’ Freedom Convoy that rolled toward DC over the past few days, inspired by the similar Canadian convoy recently blockading Ottawa to protest Covid mandates. I can imagine some very mixed thoughts going through the mind of a weary driver in the convoy after the events of the past few days—and past two years.

Last week saw Trudeau revoke the use of the Emergencies Act he had invoked days earlier to wield extra political powers in response to the truckers up north. That looks like a victory for the truckers, but it’s worth remembering it merely restores the status quo in a squabble revolving around just one rule (a vaccination mandate) out of the thousands under which Canadians, like citizens of the U.S., suffer every day.

This win will not change the fact that Trudeau has called China the most admirable country besides Canada, lauding “their basic dictatorship” for its ability to “turn on dime” and, say, become environmentally-friendly overnight (which it hasn’t). China wouldn’t even allow export of its initial Covid vaccine samples to Canada, yet Canada’s Castro-lookalike prime minister fawns over that more authoritarian nation, perhaps envies it.

If you’re driving across the U.S. to protest here, though—perhaps driving as angrily as Nicolas Cage in Drive Angry—you’re likely thinking less about Trudeau than the American bigwigs who’ve engaged in seeming doubletalk or reversals on the topic of Covid while you try to keep your life and schedule in order.

Maybe you’re thinking about disgraced self-appointed health-and-surveillance czar Bill Gates admitting at a talk in Munich that the Omicron wave of Covid has done more to confer immunity than vaccines have. Maybe you noticed that Reason acquired audio of Rochelle Walensky, the Centers for Disease Control head, admitting in a closed-door meeting that the studies on masking efficacy are weak and the populace angry but we’re sticking with masking students anyway.

Maybe you’re thinking about how, just as Democrats and incumbents in general need a wave of optimism to ensure their congressional reelections, we’re told the Covid crisis and attendant anti-Covid protocols are over—despite the case numbers being about the same as they were before (meanwhile, members of Congress have demanded an explanation of tenfold increases in other illnesses besides Covid while we’ve been obsessing over that one disease). You suspect that when optimism is no longer useful, we’ll go back to urging protocols forever. Whatever. Onward you roll, seeking clarity.

You probably care about that roughly one person in 1000 who’s died from Covid in the U.S. in the past 12 months (admittedly, a big chunk of the roughly 10 in 1000 who died from all causes). You may even agree that vaccination could reduce that number to something more on the order of one person in 7000. But as a big rig trucker, facing danger on every turn, you may think all of these risks sound small enough that the big campaign against them, with mandatory participation, is like a crusade to make people wear foam helmets to slightly mitigate the small risk of being injured in elevator accidents.

Your weighing of the risks here might be slightly off, but even the crudest of number-crunching is better than what you get from elite journalists. As Kevin Tober tweeted on January 30: “Kurt Andersen from The Atlantic was just on CNN with Jim Acosta and compared people who are unvaccinated, or who are skeptical of the Covid vaccines, to committing a form of human sacrifice like the Aztecs.” Jeez, no wonder they fear you guys rolling into town.

Adding insult to injury, Andersen is a product of Harvard and co-producer of a Peabody-winning radio program who lectures the rest of us about the dangers of extremism. How mellow and moderate is he, though? CNN’s caption during his segment read, “AUTHOR: PARALLELS BETWEEN FAR RIGHT’S ANTI-VACCINE RHETORIC AND MASS HUMAN SACRIFICE PRACTICED BY MORE ANCIENT SOCIETIES.” If that’s not itself rhetoric nudging people toward all-out defensive civil war, I don’t know what is.

By contrast, we’re meant to remain calm about the four-fold increase in deaths from interrupted medical care during all this, I suppose. Cancer patients have been refused care if they aren’t vaccinated. Officials including Biden switch gears in response to public sentiment and omnipresent Omicron, claiming, hey, they never said vaccination means you won’t get Covid.

The muddled messaging ends up pitting layers of elite control against each other without a clear timeline of who said what when, as with NPR’s Nina Totenberg being publicly jointly condemned by Justices Gorsuch and Sotomayor for falsely reporting that (GOP appointees) Gorsuch and Roberts were fighting at the Supreme Court, not over the masking rules for the rest of the country, but over whether the former must obey the latter’s in-house order that everyone on the Supreme Court must mask if (Democrat appointee) Justice Sotomayor asks them to. Or maybe this never quite happened.

Amidst all the confusion and frustration, it’d be nice to have hard statistics on, for example, how many people still trust statistics after the past two years of number-crunching. Depending on how you carve them up, you get some different apparent implications about the crisis, as with those numbers suggesting flu mysteriously went away throughout 2020 and a comparable number of Covid cases appeared. A study in the middle of last year seemed to show that most hospitalized Covid patients in the UK only started testing positive after they’d spent time in the hospital for other things, which is enough to make you sympathize with elderly grouches who think the key to health is avoiding doctors.

Back when she was more open and comfortable about the fuzziness on all the math here, the aforementioned Walensky said over 75 percent of Covid deaths were of patients who had “at least four” comorbidities and were “unwell to begin with,” possibly an “encouraging” sign that the Omicron wave, at least, wasn’t too deadly in itself. The dogmatic mental defectives at Rolling Stone (the media being the real guardians of policy and master narratives) responded within hours with a piece proclaiming: “‘Abhorrent’: Disability Advocates Slam CDC Director for Comments on ‘Encouraging’ Covid Deaths,” as if she was trying to kill people through decreased vigilance rather than tease out the numbers.

As if to atone, a short time later Walensky appeared in a hearing double-masked and triple-vaxxed. Good Morning America added to her humiliation by dropping the comorbidities context from her Omicron deaths comment in their reporting, as if she’d just been saying she wasn’t much fazed by Covid’s big kill count.

The media and government would like to turn this crisis (and everything else) into a simple moral fable, which would make it easier to motivate people, whether you want them to mask or drive across the country to a national capital. If moral outrage weren’t the biggest motivator (and deranger) at play in all this, they wouldn’t still be so keen to test all truckers for marijuana traces, even amidst a purported trucker shortage and uncertainty over how the vaccination fight will play out. No matter the urgency or the uncertainty of the situation, controls inch in from all sides.