What Happened to Populism? 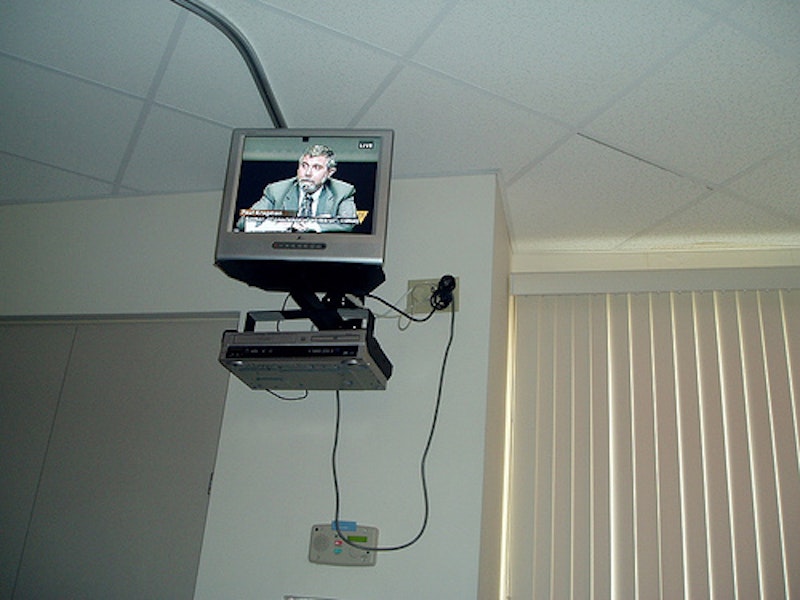 Photo by IndyDina with Mr. Wonderful

There are two left-wing op-ed columnists whose nail-on-a-chalkboard words I read every week, The Wall Street Journal's Thomas Frank and The New York Times' Paul Krugman. Whether this is donning a hairshirt for the actual enjoyment I derive from men whose opinions make more sense—say The Spectator's Rod Liddle or Matt Labash's too-infrequent essays in The Weekly Standard—gives me pause, for a steady diet of Krugman isn't one of my doctor's recommendations for leading a stress-free life.

Nevertheless, while I won't burn out my eyes looking at The Huffington Post—there are limits—it's reasonable, actually necessary, to see what's on the minds of these two representatives of the magisterial liberal intelligentsia as they wheeze through, often unhappily, the Age of Obama. Frank, the populist minister who famously (at least in political circles) grew up in Kansas and now resides in Washington, D.C., is far wimpier than Krugman, and why he was chosen as the Journal's token editorial page liberal mystifies me, but his passive-aggressive prose is representative of the high-minded debate that one imagines takes place after hours at parties and bars that serve mainly imported beers in the nation's capital.

On Sept. 23, for example, Frank takes a figurative belt to the backsides of President Obama, Nancy Pelosi and their fellow Democrats for not defending themselves against the "crudely posed" arguments that conservatives engaged in during "their summer of bluster." Frank isn't about, one imagines, to hand-letter a poster and confront the "louts and bullies" who have gained such notoriety in the media, but he's quick with advice from his easy chair to the leaders of the Democratic Party. Fight back! The truth is on your side! He fears that the Democrats "pine for civility," even though Pelosi's team "has the arguments; it has the facts; it has gale-force historical winds at its back. Why not give back as good as you get? Why not simply beat the other side instead of complaining tearfully that they play too rough?"

Nevermind that that "gale-force historical wind" has now settled down to a gentle breeze, as Obama's very high approval ratings have decreased-although not as precipitously as conservatives might espouse-and the administration has aimed its political maneuverings at next year's midterm elections rather than fully engaging on the issues of health care, Afghanistan, or further regulation on the financial industry. Frank doesn't seem to understand, or isn't willing to admit, that when you sort out Obama's gauzy oratory and admonishments, he's at heart a politician, far closer to the center than most liberals had hoped, and who, along with attempting to negotiate the ongoing recession, is, not unlike Bill Clinton, already laying out plans for his 2012 reelection campaign.

Public option on the health bill? Sure, sounds good to the President in theory, but he just wants any bill passed that'll get his team some credit. And politically, he wants it all, as his ham-handed interference in New York's upcoming gubernatorial contest amply demonstrates. This was such a miscalculation—Gov. David Paterson is dead meat in a Democratic primary anyway, so why waste the time?—that even a New York Times editorial chastised the White House for "publicly hobbling [Paterson]."

Should Obama's political team wade into every Congressional district ahead of the elections, every gubernatorial, mayoral and dog catcher race, it will have squandered one of the qualities that got the man elected in the first place: that he wasn't about "politics as usual." That's the oldest slogan in the book, but Obama was actually convincing, and now some of his voters are scratching their heads.

As for Pelosi, she has her own set of difficulties in the leadership role. One, she and Majority Leader Steny Hoyer don't agree on much at all; two, after promising to clean the Congressional stables of Republican stench, there's Reps. Charlie Rangel and Jack Murtha, not to mention Sen. Chris Dodd, proving that political corruption isn't confined to one party.

Frank lays it on thick, writing that eschewing gloves-off confrontation with the likes of entertainer Glenn Beck (whom he preposterously calls the conservatives' most prominent representative) "goes against the old-rough-and-tumble image of the Democratic Party." Yes, that is an old "image": you'd have to go back to LBJ shaking down party members while sitting on the john or Harry Truman "givin' them hell" in 1948.

Krugman, to his credit, doesn't get all mushy and resign himself to the prospect of a genteel Democratic party. He goes right on the offensive, directly criticizing Obama for his "visceral reluctance to engage in anything that resembles populist rhetoric." Krugman wrote that was "astonished" that the President compared those greedy bankers to wealthy Silicon Valley entrepreneurs and NFL stars in explaining why he's not yet prepared to limit the compensation of the men and women who are leaders in the financial industry. I don't agree with Krugman's point of view, but I chuckled upon reading his opinion that "quarterbacks who make too many risky passes don't have to be rescued with hundred-billion-dollar bailouts."

It appears certain that Krugman's disappointment with Obama will only be ratcheted up in the coming year—after all, he originally favored John Edwards for president last year—and the only question is how harsh his columns will be. He concludes: "It's time for the president to realize that sometimes populism, especially populism that makes bankers angry, is exactly what the economy needs."

Well, nuts to that, is my view, and it's a welcome spectacle to see the clueless Sen. Max Baucus get battered from all sides with his health care bill (which is tax-heavy and confusing), and receive little support from Obama, Harry Reid or Pelosi. Still, this is why I grudgingly read Krugman (everyone needs an occasional shot or two of Castor Oil): he tells Obama and his advisers what they don't want to hear, with nary a worry that he'll lose favor with the Thomas Frank crowd. Krugman's a loyal opposition within a (too) loyal majority.