Peter Doocy Isn't a Dumb Son of a Bitch

And he doesn't play one on TV. 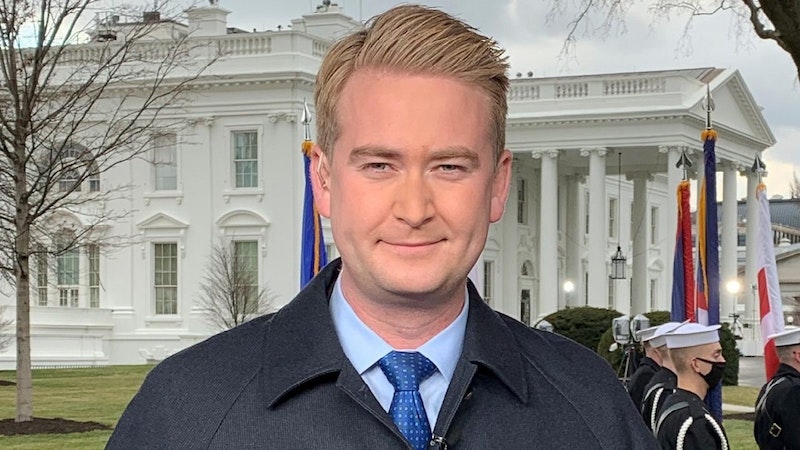 On April 18, Peter Doocy asked Jen Psaki, "Why is it we can sit here in the White House briefing room with no masks, but people can't sit in an airplane cabin with no masks?" The Fox News White House correspondent was referring to the unpopular, intrusive airline mask mandate the Biden administration has pushed since day one—the mandate a U.S. district judge in Florida recently struck down. The HEPA filters used on commercial jets, according to the White House's own website, are "at least 99.97 percent efficient at capturing human-generated viral particles associated with COVID-19."

Air travel has never been a Covid vector, but the Biden administration's press secretary, who comes off as a prissy schoolmarm, responded with her usual smugness and sarcasm. "Well, Peter," Psaki said, "I'm not a doctor, you're not a doctor. If you're a doctor, I'm not aware of that until today." And then the privileged, Stamford-Connecticut-raised mouthpiece talked about green, yellow, and red zones, in lieu of a science-based response. If the Biden administration believes that doctors should set all health-related public policy, then it should have MDs set the speed limit on highways, and see where that gets us. While the docs are at it, let them set policy on sales of tobacco and alcohol. We need to learn to love lockdowns of all kinds.

Joe Biden, in his inaugural speech, said, "But if you're ever working with me and I hear you treat another colleague with disrespect, talk down to someone, I promise I'll fire you on the spot. No ifs, ands, or buts." That typical and empty Biden bombast obviously doesn't apply to Psaki, or anyone else who works for the President. Doocy's one of the Democrats' favorite whipping boys because he does his job, which is to hold our elected national leader accountable. After that leader said, into a hot mic, that Doocy's a "stupid son of a bitch," someone asked Psaki on a podcast if that description was accurate. Her response was that Fox provides him with questions "that would make anyone look like a stupid son of a bitch," although she doesn't believe Doocy, an accomplished reporter, doesn't come up with his own questions.

The Democrats love talking about how Psaki "slam dunks" Doocy. Here's a headline from Vanity Fair: "Jen Psaki Stuffs Fox News’ Peter Doocy in Metaphorical Locker During White House Press Briefing." But "beating" a reporter armed with facts isn’t the job of a press secretary, nor does it serve the nation well. On April 18, Doocy asked Psaki if the Biden administration would apologize for the President saying, last fall, that U.S. Border Patrol agents "strapped" Haitian refugees at the Mexican border. This was right after it became clear that the government wasn't going to prosecute those agents for whipping nothing more than air. The Biden administration has known for a long time that its leader slandered the border agents, but wants no part of making amends. The media wants to bury the bogus story too, because they were complicit in spreading it.

Psaki dodged Doocy's question with her tone of superiority, conceding not even the slightest nod to the unfairly maligned border patrol agents. It took six months (spread the timeline out so people will forget it) for an investigation to determine what anyone (maybe even POTUS, if he'd bothered) could've figured out in five minutes on Google. By the way, Fox News debunked the false whipping story immediately, so which media outlet is the "stupid" one?

Say what you will about Doocy, but his oppositional, yet courteous, approach in live settings has sometimes succeeded in getting the President to engage in topics that other reporters are afraid to broach. The best way for the White House to deal with this reporter is to treat him as a canary in a coal mine. He's ahead of the MSM curve in that he's asking questions about issues that will eventually go mainstream, so take the pain now to prepare for the future.

Those who see Doocy as a troll and a foot soldier for a devious conservative cable station are in denial regarding the hard lines of demarcation that define the current, polarized media landscape. There's been an effort on the Left to freeze him out during White House press conferences and press briefings, which is foolish and anti-democratic. Doocy's a competent reporter, and one of the few conduits to an audience that it's not politically smart to write off. He's polite and low-key, unlike the bombastic and self-aggrandizing progressive hero, Jim Acosta. Doocy doesn't show the administration the deference that the compliant media does, but that's not what he's paid for.