The Birds Are For Bernie

RQ visits the Senator as he recuperates to reaffirm the animal kingdom’s support. 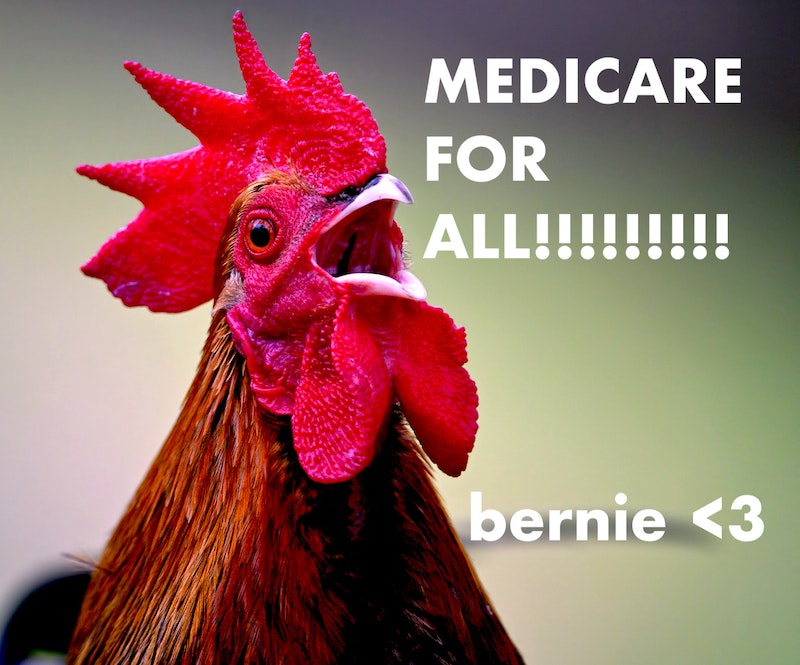 “Bird flew/Bird flu”—that’s poetry. I write those four words to demonstrate that I’m an expert in the field. As my wife often says, it takes all kinds. Some of us cook, some clean, others deliver, still more receive. I wish everyone could feel as happy and confident in their work as I do, but this is not God’s heaven. This is our world, and we have some control over it. Not much, but some. Alone in the galaxy, this means a lot. Voting is harm minimization and a check on the most powerful military in the world.

We’ve seen how hard it is for politicians to get positive legislation passed, and how easy it is for presidents to drop bombs, fly drones, and send troops over to invade lands where we don’t belong and aren’t welcome. The birds of the world have watched humanity’s folly for too long now. We sent a representative to Oregon in 2016 to give a tacit but very public endorsement to Bernie Sanders. That brave bird knew, just as the bald eagle that tried to bite Trump in his office knew. We observe you constantly and we are largely disappointed with what you’ve come up with.

Bernie will be fine; I visited him yesterday at an undisclosed location. Since 2016 and my stint in the clink, I’ve been reluctant to talk politics here. I’ve become much more reclusive because I have severe PTSD and chronic pain from escaping Guantanamo Bay and sailing in my friend Bucky in the Atlantic Ocean for many days. It’s difficult for me to go outside and to be near large bodies of water. I have panic attacks. But I wasn’t going to let Bernie down in his time of need. He needed to know that the sky is still with him and always will be.

Would I vote for Bernie Sanders if he were dead? Yes. But as a bird, I’m technically not an American citizen. I’m not allowed to vote, at least legally. Bernie told me to lay off the “vote early, and vote often” stuff, he said it was “facacta nonsense” and counterproductive. I apologized, listened, and learned. This is what you do when you’re in the presence of a saint.

I told him to keep going, that we believed in him. I didn’t waste any of the Senator’s time; I was merely a messenger. It was hard enough to get into that hospital undetected. For once, mankind’s utter disregard for our existence came in handy. Nobody noticed a fucking red rooster walk right into a hospital with one of the most famous people in America recovering from an operation. But I got in. We didn’t even exchange that many words: I delivered the message (which none of you will ever get to read, sorry losers), the Senator nodded, smiled, and graced my hackle with his hand. Like Christ healing the sick, Bernie’s tactile endorsement invigorated me more than any food, drug, or exercise routine ever could.

Bernie is a mensch. Say what you will about his policies, but he’s an honest politician. As Julian Castro said the other day, “the Bernie from 30 years ago is the same Bernie as now.” I have some inside information that he’s already angling for a VP slot, but I didn’t bother the Senator with gossip. I said my piece, and as I turned to leave, he said, “Rooster! Wait. Please tell Monica I said hello, give her my best. And I hope your cousin is getting all the help he needs. Addiction is a horrible thing. No one should be denied the help they need.”

I was crying. I said thank you and left. Still no one noticed me, not even the fake media outside (they were cardboard cutouts). But it didn’t matter because someone did notice me, and that someone is Bernie. He’s the only one that sees humanity in the birds, and vice versa. It’s why we sent a representative last time, and believe you me there will be more. I may be too controversial to give a proper public endorsement (the bird that got to fly onto his podium is sort of annoying actually, a real brown-noser, but he got there in an honest way. My family is not so conventional).

From the animal kingdom to Bernie Sanders and his presidential campaign, we give our full endorsement and support. We know Bernie will go the distance because we have been on this Earth much longer than any of you, and we don’t see saints like him often. Listen to us when we are singing in the morning: it is devotion.