The Lies This Time

Everything you think you know about Backpage and the upcoming, Aug. 23 trial of its former owners is wrong—the government just told you so. 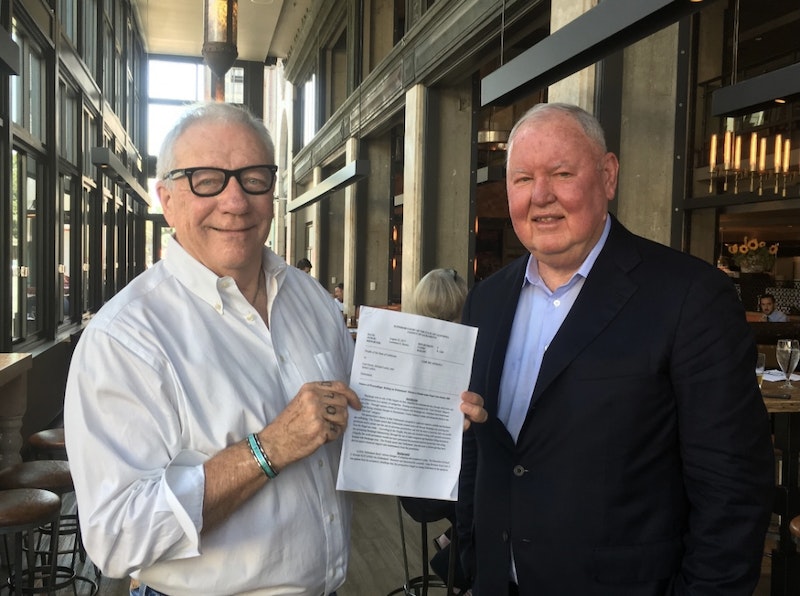 With all the crowing that took place in April 2018 after the FBI seized Backpage.com and arrested its ex-owners, award-winning journalists Michael Lacey and Jim Larkin, you’d have thought the feds had collared Whitey Bulger all over again.

Attorney General Jeff Sessions, who within a matter of months would be past tense in the Trump administration, laid it on thick in a DOJ press release at the time, praising the myriad law enforcement agencies involved for removing what was basically a Craigslist-clone from the Internet.

“[W]e have put an end to the violence, abuse and heartache that has been perpetrated using this site,” said Sessions. “We have taken a major step toward keeping women and children across America safe.”

Backpage “exploited human beings for profit,” the release claimed, “facilitated sex trafficking,” and victimized “thousands of women and children.” The DOJ had finally captured the “masterminds” of the operation.

But to borrow a line from Barry Goldwater, Sessions and politicians of both parties who cheered Backpage’s demise were full of the brown stuff.

This June, two months before Lacey and Larkin (and four co-defendants) are scheduled to go to trial on 100 counts related to Backpage’s alleged facilitation of prostitution via advertisements posted by the site’s users, the U.S. Government Accountability Office (GAO) issued a report, finding that “the FBI’s ability to identify and locate trafficking victims and perpetrators” has been “significantly decreased following the takedown of Backpage.com.”

Backpage was “generally responsive to legal requests for information,” the GAO explained. But with Backpage gone, and a new law in place making it a federal crime to publish anything that remotely resembles a commercial come-on for sex, the adult ad market has “fragmented,” with host platforms migrating overseas “to shield themselves from prosecution.”

That law—the union of two bills, the Fight Online Sex Trafficking Act, and the Stop Enabling Sex Traffickers Act (FOSTA/SESTA)—also carved out an exception for sex trafficking to Section 230, the commonsense 1996 law that makes you responsible for what you post on the Internet and gives interactive websites the freedom to take down offensive content without incurring civil liability, or criminal liability under state law.

(Note: sex trafficking is a heinous crime, involving either minors in the sex trade, or adults via force, fraud or coercion; prostitution is a consensual transaction between adults, prosecuted locally as a misdemeanor. Disingenuous parties often conflate the two.)

Per the GAO, in the “post-Backpage market,” platforms that host adult advertising don’t employ the “technical staff capable of screening ads” for illicit commercial sex, as Backpage did. Nor are overseas platforms likely to “respond to legal process,” making the task of “obtaining evidence” a “cumbersome and time consuming” process.

In other words, contrary to the DOJ’s massive snow job, eliminating Backpage and passing FOSTA/SESTA endangered the lives of trafficked women and children, hampering efforts to rescue them and bring their exploiters to justice.

This authoritarian, one-two punch also led to the chilling of free speech online, with Craigslist doing away with its personals section and Reddit and other mainstream sites 86-ing frank discussions of sexuality.

Adults engaged in consensual sex work endured what some dubbed the “SESTApocalypse,” in which they were de-platformed and denied the ability to vet clients and avoid risky assignations.

There’s also evidence that Backpage’s eradication and FOSTA/SESTA made the world deadlier for all women.

In a prescient, 2018 discussion with Gimlet Media’s “Reply All”podcast, the study’s lead researcher, Prof. Scott Cunningham, was asked if he thought something similar would happen after FOSTA/SESTA and the Backpage takedown.

His answer: Yes. Sex workers, he said, “are going to die.”

A few Congresspersons, such as Rep. Ro Khanna of California have introduced legislation to study the unintended impacts of FOSTA/SESTA on “people engaged in transactional sex,” though the effort seems stalled for now.

The number of adult ads on the Internet took a hit after April 2018. They have reportedly rebounded to numbers exceeding the Backpage era. But as the GAO notes, the sites they’re now on are largely beyond the reach of a U.S. subpoena.

Pitch and Switch: Cynical politicians such as U.S. Senators Richard Blumenthal and Rob Portman used Backpage as their whipping boy to get FOSTA/SESTA passed, though FOSTA/SESTA was not needed for the feds to prosecute Backpage.

The government indicted Lacey and Larkin days before Trump signed FOSTA/SESTA into law, charging them with alleged violations of the U.S. Travel Act, a 1960s-era law that targeted certain illegal ventures operating over state lines, like gambling or prostitution. Prosecutors heaped conspiracy and money-laundering charges on them as well.

Since FOSTA/SESTA passed, the GAO report tells us that the DOJ has used the law only once, and not in relation to Backpage.

In the lead-up to the law’s passage, a number of commentators warned that FOSTA/SESTA was flawed and that the Congressional witch hunt against Backpage would backfire.

Dr. Kimberly Mehlman-Orozco, a human trafficking expert and author of Hidden in Plain Sight: America’s Slaves of the New Millennium was one of these. She told me that the GAO report confirmed her predictions.

“Critics of Backpage erroneously claimed that taking down the platform would prevent victimizations,” she explains. “Instead, evidence suggests there is a higher demand for commercial sex and human trafficking has continued… police interventions have been the only thing hindered.”

Neither the DOJ nor the FBI can claim ignorance. Not only did the FBI give Backpage an award in 2011 for its cooperation in sex trafficking investigations, attorneys at the DOJ authored two lengthy, internal memoranda, dated 2012 and 2013, that argued against prosecuting Backpage.

Inadvertently revealed to the defense by federal prosecutors during discovery, the memos were sealed by the court and can’tbe used by the defense. They were first revealed by WIRED and later published in full by Reason Magazine.

In them, the DOJ calls Backpage “a gold mine of information for investigators,” adding that “unlike virtually every other website” with adult ads, “Backpage is remarkably responsive to law enforcement.”

Law enforcement was able to contact Backpage directly to get certain posts removed. And Backpage would turn over records without a subpoena “in exigent circumstances,” i.e., when a child was involved.

These same documents discuss the difficulty of determining the age of someone based on an ad photo—if the photo was even of the sex worker in question.

The 2012 memo concludes that “any prosecution of Backpage will likely have to overcome Backpage’s efforts” to assist law enforcement.

Prosecutors at the U.S. Attorney’s Office discovered a unique solution to this dilemma: offer the fact that Backpage execs did things like testify in court against traffickers as evidence they knew of illegality on the site and are therefore guilty.

As far back as 2016, Mehlman-Orozco was writing articles calling Backpage, “a sacrificial lamb in the war against sex trafficking.”

As the August 23 trial draws near, wherein prosecutors will try to hold Lacey and Larkin responsible for once owning an ad platform on which a fraction of users posted classifieds that later led to illegal acts, Mehlman-Orozco’s opinion remains unchanged.

“Backpage is being scapegoated in America’s failing war on sex trafficking,” she says, adding that it’s “absolutely appalling” to watch.

The Feds’ Bad Faith: The case against Lacey and Larkin is a sham, and the prosecutors know it. Backpage worked to keep anything involving illicit conduct off the site, while permitting freedom of speech for adult ads that had been common for decades in alternative weeklies—such as those once owned by Lacey and Larkin as part of the Village Voice Media chain.

Backpage answered subpoenas within 24 hours and spent millions of dollars to develop multiple levels of review for adult ads, using both computer and human moderation. It reported more than 400 suspect ads per month to the National Center for Missing and Exploited Children (NCMEC), the official clearinghouse for such reports.

According to the courts, Backpage was operating within the law. From 2010 on, several federal district and appellate court judges ruled that Backpage’s adult ads were protected both by Section 230 and the First Amendment.

And in 2016, when Kamala Harris, then California’s Attorney General, arrested and charged Lacey and Larkin with “pimping,” state court judges twice tossed the charges as contrary to California law and the Constitution.

One would think such facts would argue for their innocence. But before the federal indictment, the government flipped the person Lacey and Larkin sold the company to in 2015, former CEO Carl Ferrer, who cut a sweetheart deal with the feds in exchange for his testimony.

Prosecution witnesses will offer heart-wrenching tales of victimization at the hands of pimps, traffickers and johns. The feds will attempt to paint Lacey and Larkin as vicariously responsible for these crimes, which they had no knowledge of or involvement in.

Lacey and Larkin aren’t pimps or racketeers. They’re newspapermen. Still, the government has engaged in a series of reprehensible, win-at-all-costs tactics: the seizure of all of Lacey and Larkin’s assets, including funds derived from their prize-winning papers; the wholesale destruction of evidence from the website’s servers; and demanding their bail be set at $1 million apiece, when pretrial services advised that they be released on their own recognizance.

What did Lacey and Larkin do to earn such vindictiveness? They pursued their rights under the Constitution, and they refused to bend the knee to crass politicos and Attorneys General who demanded they eliminate First Amendment-protected speech. For this, they’re being railroaded and slandered. Both in their 70s, if found guilty on just a few of the100 counts, they could end up spending their last years in prison.

All so the DOJ can nail some pelts to a wall and pretend it’s done something about “sex trafficking,” when in reality, its actions have demonstrably put the lives of America’s women and children at risk.

—Stephen Lemons is a freelance writer working for Front Page Confidential, a site founded by Lacey and Larkin, in addition to various other outlets. His views are his own, and he does not speak for the defendants. Read more of his workat StephenLemons76.com.