The Department of Education has indicated, in writing, that it wants CRT taught in schools. 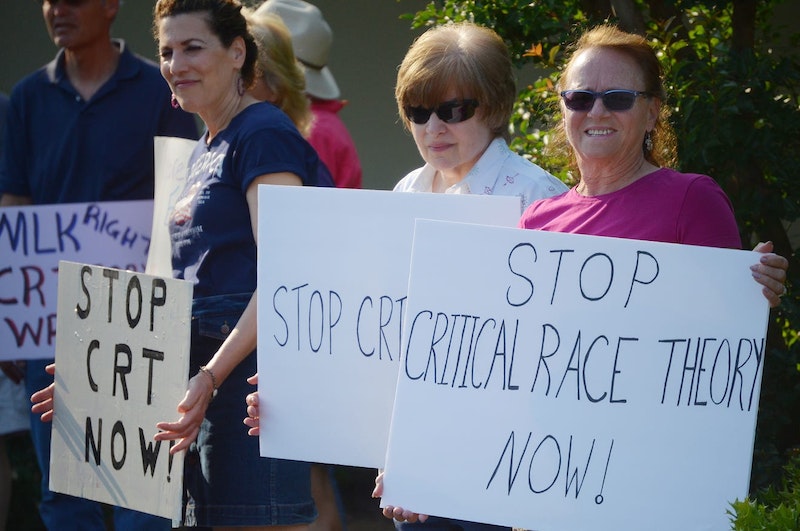 The level of confusion surrounding Critical Race Theory makes understanding it like trying to perceive reality while facing a funhouse mirror. The funhouse mirror, in this case, is the media.

Let's start with the fundamental problem that almost none of the conservatives who are up in arms about CRT know what it actually is, since they're in the habit of "receiving wisdom" from partisan agitators such as Fox News and Republican grandstanders like Ted Cruz.

The main tenet of CRT, which emerged in the legal academy in the 1970s and then spread to other fields of scholarship, is that racism and unequal racial outcomes are the result of subtle social and institutional dynamics—systemic racism—rather than explicit and intentional prejudices on the part of individuals. Therefore, all the Republicans saying they don't want our children being taught, under CRT, that all white people are racists are confused. Under CRT teachings however, children would not be taught that the U.S. has made much racial progress over the past fifty or so years, while being taught that any racial disparity of any kind is systematically race-based.

CRT also posits, citing the Human Genome Project's refutation of the idea of biological racial differences, that race is a social construct rather than a matter of biology. In other words, Japanese people and Nigerians are of the same race. The theory also stresses the importance of a concept referred to as "storytelling." This is why, in progressive discourse, you often encounter references to the "lived experiences'' of people of color. The assumption is that many commonly accepted beliefs are based on research and narratives that minimize the real-life experience of POCs.

Finally, CRT stresses the importance of "interest convergence," a theory coined by the godfather of CRT, the late Derrick Bell, a former Harvard law professor. Interest convergence stipulates that black people achieve civil rights victories only when white and black interests converge. In other words, when there's nothing in it for white people, white people aren't going to work for black civil rights, despite all the white people who were out in the streets last year for the George Floyd protests.

So should we worry about the above concepts being taught to young children? Certainly there still remains a degree of systemic racism in this nation, despite all the legislation that's been passed since the 1960s. If we want to eliminate the associated iniquities, then identifying legitimate examples of systemic racism and educating young people about their existence is a positive step. On the other hand, overemphasizing the importance of their "lived experiences" could make them prone to never questioning their own perceptions—perceptions that could be based on a narrow level of experience. It elevates the anecdotal to the unquestionable, because to question is to offend.

In the summer of 2018, Oumou Kanoute, a student at Smith College, wrote on Facebook that she was eating lunch in a dorm lounge when a janitor and a campus police officer asked her what she was doing there. "All I did was be Black,” Kanoute wrote on Facebook. In fact, the dorm was closed to students of all races, and a law firm that Smith College hired determined that no bias was involved, which the media ignored and Smith discounted.

Because of Kanoute's "lived experience," the "racist" janitor was put on leave, a dorm worker was labeled a "racist" on Facebook, Smith announced new anti-bias training for all staff, and the school acceded to Kanoute's demand that dormitories be set aside for black and POC students.

CRT teaches that marginalized people have better access to knowledge about their own experiences of oppression than privileged people, so we can expect more fiascoes like this if CRT or CRT-adjacent teachings ever become a classroom staple. The student, in this case, certainly didn't have better access to knowledge of her oppression (she imagined it), but she knew how to capitalize on her faux victimization.

The Department of Education is now discussing a plan to give grants to schools that "incorporate teaching and learning practices that reflect the diversity, identities, histories, contributions, and experiences of all students." Conservatives are calling this a plan to teach "CRT" to young people. DOE has posted a plan on the Internet. The plan doesn't mention CRT, but it cites prominent CRT scholar Ibraham X. Kendi's book, How to Be an Antirascist, as a source for the development of its grant proposals, although the Boston University professor's an ideologue whose teachings are both toxic and lucrative. Kendi claims the right to call anyone who doesn't behave or believe exactly as he demands a "racist," and also teaches that capitalism and racism are "conjoined twins." According to the professor, a key requirement for being what he calls "Antiracist" is to fight against capitalism.

While Republicans wailing about CRT may not know much about the formal theory, which is what progressive pundits are harping on now, they still may have legitimate reason for concern about the Biden administration planning on opening the door for children to be taught that they're racists unless they become socialists. Conservatives use "CRT" as a catch-all term for the divisive and untested teachings of highly-paid polemicists like Kendi and Robin DiAngelo, author of White Fragility. That might not be 100 percent accurate, but it's at least as accurate as progressives calling everything "white supremacy." Republicans would be better off using the term "wokeness"—a broader term—but it's too late. Still, with the DOE now citing a radical CRT advocate in its new educational guidelines, it's not inaccurate to say that the government is pushing the teaching of CRT in American schools.

Despite what progressives are claiming, to have serious reservations about what the Department of Education is proposing doesn’t mean that one doesn't want children to be taught about American horrors like the Tulsa race massacre of 1921, which I should’ve been taught in school. CRT is correct that racism is not a bygone relic of the past and that it permeates the social fabric of this nation. But CRT is associated with the radical left wing of the Democratic Party, and the concern (even among Democrats) about it wanting to tear apart that fabric and start over rather than repairing it is not without foundation. Kendi, a leader of that movement, has spelled out what his plan is—to end capitalism, and one of his methods is to shame people into it.

CRT, with its fervor to dismantle the power structure, is thinly-disguised political ideology. The theory's proponents want malleable children on their side—the younger the better.