The GOP Has Made Me a Patriot

The "stop the steal" mob has exposed the rot in the Republican Party. 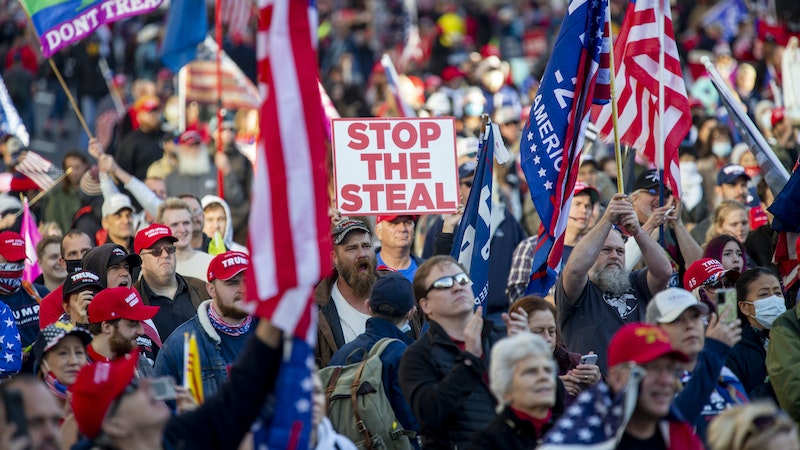 I've never talked about being a patriot. I leave that sort of posturing to all the blowhards trying hard to impress, many of whom fit into the "MAGA" ("ultra-MAGA" to Joe Biden) category—the kind of hopeless fools Trump once duped at a CPAC conference by hugging and kissing the American flag, like it was a women he'd just cornered in a side room at a Mar-a-Lago banquet, while mouthing the words, "I love you, baby." Loudness about patriotism makes one susceptible to cheap stunts like this one.

Patriotism is like religion in that, generally speaking, parents instill it in their children, plus it's faith-based, usually entailing the repetition of a host of empty platitudes. In a sense, love of country and love of God go hand in hand. Faith in God means God can do no wrong, and the same applies to "America." So when America went to war with the Viet Cong, all the self-proclaimed patriots were sure it was their duty to support a misguided war. But it wasn't "America" that sent all those soldiers to Asia to die for nothing, fighting against a regime that was pushing back after being brutally colonized by the French for decades. It was lying politicians in Washington, D.C. pushing the "domino theory." Conflating your country with its warmongering leaders leads to mistaking supporting every war it starts with patriotism.

But to those who've loudly proclaimed themselves patriots since the 1960s, any war that an American president decides to start is a "just" war that only the unpatriotic would oppose. It's interesting that these so-called patriots have a sizable Venn-diagram overlap with those who oppose overreach by the federal government. The government forcing someone's son abroad so he can come home in a box because some politicians decided to fight a proxy war in order to show how much they oppose communism is about as far as a government could overreach.

"America, love it or leave it" has long been a common refrain from our staunch patriots on the Right who constantly remind us they're the only real patriots. Until recently, I'd never have dreamed of trying to win a patriotism contest with one of these flag-wavers. Now I'd welcome the opportunity.

One "patriot" I wouldn't mind going up against is the My Pillow MAGA cornball, Mike Lindell. The fact that this halfwit huckster has become a prominent Republican spokesman demonstrates how Trump has navigated the GOP, which no longer has any claim to being the patriot party, into the rocks. The bloviator, who once visited the House to discuss the imposition of martial law in order to "stop the steal," had this to say about Trump ally, Kari Lake, winning the recent GOP gubernatorial primary in Arizona: "She won, what are you talking about? Of course, there was election fraud. She won in spite of the algorithm. So much corruption in Arizona!"

This came after Lake had declared on election eve, when it appeared she was losing, that another "steal" was on, but she somehow won anyway. Lake's lucky to have errand boys like Lindell backing her up and assuring us that even though all elections are rigged against Republicans, sometimes good triumphs over evil and they win one now and then. But preemptively calling out election fraud (when you know there's no fraud) before the results are in doesn't strike me as patriotic. It’s a way to undermine what actual patriots believe in.

Talking about the "algorithm" that the Democrats are employing at the polls is both unpatriotic and un-American. When the smooth transition of power is no longer a given, it puts this nation on a downward trajectory. While the Democrats have overused the claim that "our democracy is in danger," denying the results of a national election with zero evidence is a clear threat to democracy. But all those Republicans who bought into the idiotic concept that the vice president has the power to decertify the election results after his boss has lost the election can no longer pretend to be concerned about democracy. They can't pretend to be patriots either.

In my innocent youth, I was a real patriot. I'd read the Encyclopedia Britannica and feel a thrill when I'd see a list of the top 10 silver-producing nations in the world and the United States was at the top. We had the silver. We had the gold. We had the GDP. Go USA! While many on the Left want to teach children to hate their country, that wasn’t the case when I was growing up. I felt patriotic until I learned about all the young men who'd been sent to Vietnam to die in a war that at least four successive presidents—starting with Truman—had lied to the public about, as the Pentagon Papers revealed. At that point, I could no longer find a reason to call myself a patriot. A government that's a major threat to my life is something to fear rather than champion.

Reality kicked in, so I've never waved a flag, flown a flag, or done any of the performative patriotic acts associated with the Republican Party that Trump so easily manipulated. Still, I'm a patriot in comparison to most Trump supporters. While the former president has always disgusted me, I didn't buy into the nonsense that the Russians rigged the election for him. Without the common belief that our elections are valid, we'll get much worse than January 6 going forward, and I don't want any part of that.

I've never supported a war that my country has been involved in, which in the eyes of faux-patriotic Republicans makes me unpatriotic. Had I been drafted for the Vietnam War, I'd have moved to Canada. As Muhammed Ali once put it, "I ain't got no quarrel with them Viet Cong."

Those who've chosen to join the Trump cult of personality and believe in a "higher power" than their nation can no longer call themselves patriots. I'm more patriotic than the MAGA crowd is, even though I'm about as unenthusiastic as patriots come.