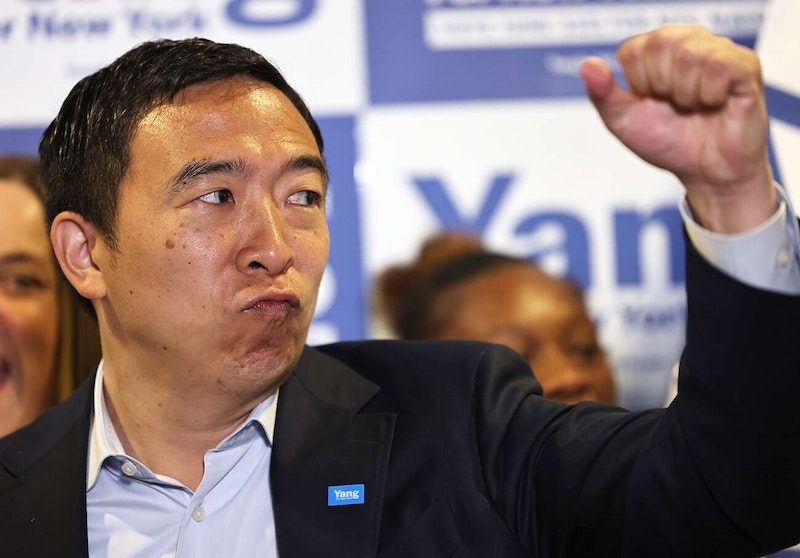 Will the newest attempt at a third party in the United States succeed? No. The leaders of the Forward Party leaders—former Democratic presidential candidate Andrew Yang, former Florida Republican Rep. David Jolly, and former New Jersey Republican governor Christine Todd Whitman—wrote an op-ed for The Washington Post explaining what makes this party different. However, their blueprint failed to grasp how a third party could succeed in this country.

They say both parties are too extreme, and call for moderate positions on a few issues and democratic reforms (like ranked-choice voting and open primaries). Now, the media is saying two people want to lead a centrist party in the country. Let’s pretend they’re serious about having a centrist party and that Yang isn’t a former Democratic presidential candidate who called for massive government expansion and no limits on abortion. He’s not a moderate.

I see no reason why a third party can’t succeed. However, it depends on how one defines success. If success is electing a third-party president, controlling chambers of Congress, and getting the party’s entire agenda done, then no way. That’s absurd. But could a committed third party that’s not in politics for the money, attention, prestige, or credit effectuate positive change in society? Absolutely. For a third party to succeed electorally, running many local candidates and building up is the smart strategy. Maybe some well-established politicians with money could run for higher positions to increase party name recognition, but the party’s success can’t rest on that person winning an election.

Many local races are non-partisan. Someone with good ideas or connections in the community can win, earn the support of the public if they’re competent, and run for higher office in the future. In the Post op-ed, the Forward Party leaders said nothing about focusing on runs for local office. So while many local seats go unopposed, the Forward Party wanted to run former George W. Bush-era official Richard Painter for attorney general four years after he lost big in a Democratic primary for U.S. Senate in Minnesota. He didn't do it. Instead, he came in a distant third place in a Democratic primary for a U.S. House seat.

It’s also unclear that people want a self-described moderate party. Moderates, independents, and undecided voters are different people. Most independents favor one party, even if they’re not registered as a Republican or Democrat.

The most successful active third party in the United States is the Vermont Progressive Party. It controls six of the 12 seats on the Burlington city council and a few state legislative seats. It won those by running to the left of the Democratic Party, not with some supposedly centrist, big tent party. And if third parties want to make a difference statewide, here’s another idea: put together ballot initiatives that will likely pass. In some states, the legislatures lack interest in bills the public sees as common sense. If it’s not the Speaker or Senate president’s priority, it may not come up for a vote. Or, if it’s an issue of government accountability, then the political establishment may lack interest—because it takes their power away.

Let’s use Massachusetts as an example. If I were running a third party in my state, I’d want to put less partisan issues that could gain broad public support on the ballot. For example, it’s one of only two states where revenge porn is still legal. Think of the coalition banning that could build. It could earn support (and money) from conservative Republicans who think pornography is harmful to society and liberal feminists who know the issue has a disproportionately negative impact on women and destroys victims' mental health. And transparency issues could work—like giving lawmakers more time to read bills, making the state legislature subject to public records, and making committee votes public. Unless you're an entrenched politician who doesn't want to be on the record, what’s the argument for secret committee votes killing bills?