A black man remembers growing up in segregated St. Louis. 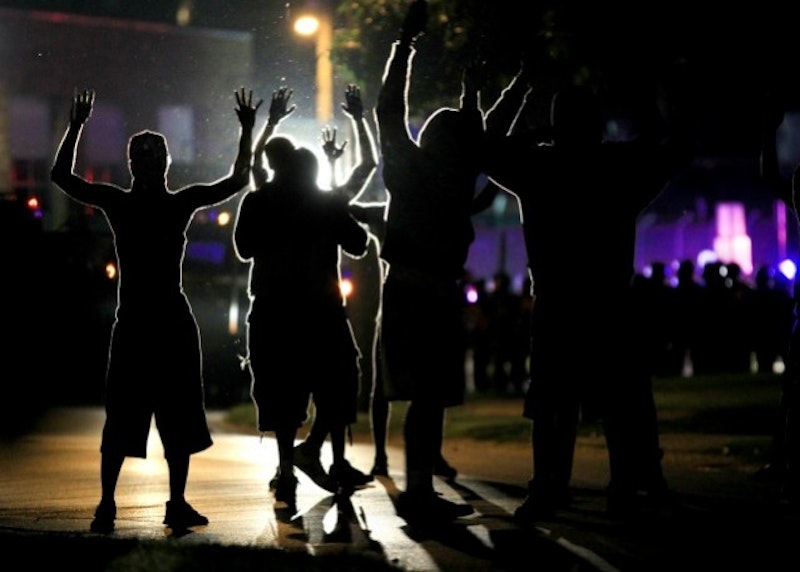 “Can you believe what’s happening in St. Louis?” my grandmother asked me, her voice spiced with anger and dismay. The necessary if cathartic riots and protests over the cold-blooded execution of Mike Brown and the coordinated attempts by the white police establishment to criminalize his black body had already been going on for several days. I couldn’t have been further from the situation, more than 4,500 miles away in Berlin, on my way to a nightclub when my grandma called just to check in.

“St. Louis is on the map now, brother!” she shouted. I told her that even my roommate, a young German guy who probably couldn’t point to Missouri on a map, was talking to me about what was going on in Ferguson.

I grew up in Ferguson. I went to Parker Road Elementary and later to Cross Keys Middle School, both part of the Ferguson-Florissant School District. As a kid my grandmother used to take us to Northland Chinese—at least that’s what we called it —walking distance from where Brown was killed. If you lived in Black St. Louis you knew about and probably ate at Northland Chinese. I’d order chicken fried rice, no eggs, and a peach Vess soda. I loved the way a cold can of peach Vess quenched my thirst, a cool burn going down my throat. That box of dark brown fried rice, oil, spices and soy sauce was a little piece of heaven in Black St. Louis.

Streetside Records was right at the intersection of West Florissant and Chambers Rd. where I nourished my love of music. I bought so many CDs there, even the first Britney Spears record, which I still have at my grandma’s place. At the time I was studying violin and was obsessed with becoming a classical violinist. Streetside is where I discovered the violinist Hilary Hahn, and when I saw how young she was, it’s where I first dreamed of being a famous violinist some day.

On Sundays grandma took us to San Francisco Temple Baptist Church, just a bit further up West Florissant, where I wore penny loafers and she put on one of her church wigs. We praised the Lord. I was so young and church service was so long, though, that all I could focus on was that we would probably go to Old Country Buffet or Ryan’s afterwards for dinner.

The Quick Trip that got burned down in the early stages of civil unrest was around the corner from where my cousins used to live. Sometimes, on a lazy Saturday or Sunday afternoon, we’d pop by their place just to say hello, and sometimes that “hello” turned into many hours of talking, smoking and playing cards. We used to walk to that Quick Trip to get candy when we got bored because the grown folks weren’t ready to leave and we were sick of being inside the house.

Lucas-Hunt Rd., West Florissant Ave., Halls Ferry Rd., Chambers Rd.—these are the major thoroughfares of Black St. Louis, and they’re the streets that marked my childhood. Those streets took me to and from work, school, violin lessons, orchestra rehearsal, church, grocery shopping, relatives houses, shopping trips, errands, fast food joints, trips downtown, movie theaters, trips to the casino, trips to the Arch. At a certain point my grandmother was too afraid to drive on the highway, and if you’re driving anywhere in St. Louis without the highway there’s no other way to get anywhere without taking at least one of these streets that will lead you through Black St. Louis.

As a kid I spent so much energy hoping that one day we would move out of St. Louis. And we did. But I never knew that one day the areas I shopped in and hung out in and places I ate would overnight be unnecessarily turned into a racialized militarized police zone. I never thought that just a few days after Mike Brown was killed yet another black body, Kajieme Powell, would die at the hands of unnecessary race-motivated police violence. I didn’t know that one day I’d be on my way to a club and that I’d get a call from my grandmother telling me there are riots in St. Louis, right near our old haunts.

Black people can’t have anything. We can’t have rights, fair mortgages, respect or an equal chance, and instead of listening white people just get angry when they’re called out on their craziness. Every time a black genius invents a new musical form, a song style, a dance craze, or a type of fashion, there it goes, suddenly “Columbused” by white people.

Black people can’t go anywhere. We are sent to prison. We can’t shop without being asked how we can afford such an expensive belt or purse, or followed and suspected of stealing. Our university professors can’t cross the street without being aggressively assaulted for no reason. Our black men can’t walk home from the candy store without fear of getting shot. St. Louis is the only place I’ve lived where you can feel the racial tension and segregation as soon as you set foot in the city. It’s a deeply backwards place. When the Riverfront Times ran a photo of an interracial couple kissing, people freaked out. Television news stories criminalize black bodies every night.

Judging by the comments made by people about these tragedies, so many white people still don’t believe race is a major issue in America, even when the evidence is stacked right in front of their faces. Instead they say dumb shit like, “Support our officers,” “Officer safety is the number one priority” and “They were just doing their jobs.” How many unarmed black men have to die at white hands before people realize there’s a problem?