National Security Is No Laughing Matter

The Twitter Bomber, Joe Lipari, and how the terrorists have pretty much won. 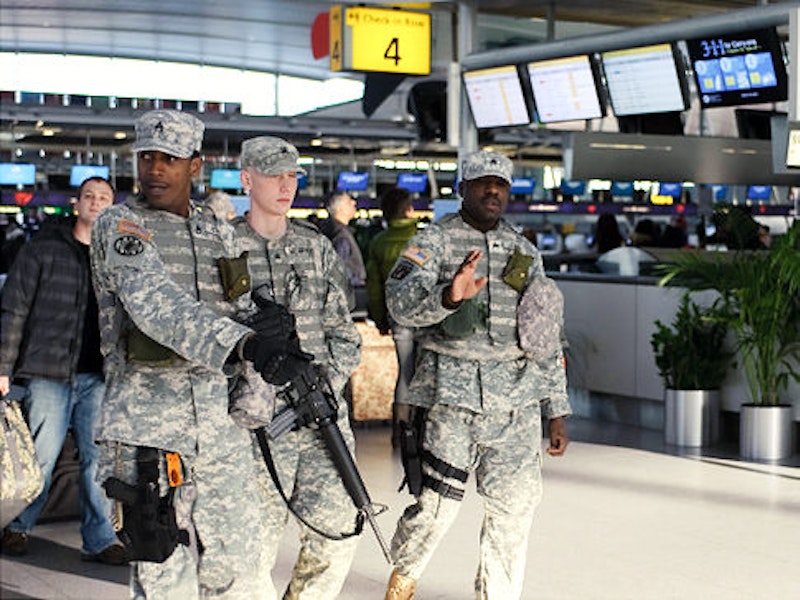 Well, the Twitter Bomber is guilty. Thank God we made an example out of him. For those who haven’t followed the story, allow me to recap: Back in May, Paul Chambers, a 26-year-old accountant from Doncaster, England, thinking his flight from Robin Hood Airport in South Yorkshire would be canceled by snow, posted the following on his Twitter account: "Crap! Robin Hood airport is closed. You've got a week and a bit to get your shit together, otherwise I'm blowing the airport sky high!!"

Some noble and concerned citizen alerted airport security, who then turned the matter over to the police. Chambers was questioned for seven hours, and despite no one taking it seriously (even the cop in charge of the case said it was merely a “foolish comment posted on Twitter as a joke for only his close friends to see”), he was charged under a rather obscure section of Britain’s 2003 Communications Act, originally intended for nuisance phone calls, because the prosecution knew it’d never win a conviction on the original charge, making a bomb hoax.

Chambers was found guilty, his appeal was denied, and he now owes the U.K. government (or the airport, or someone, I’m not really sure) £1000, plus another £2000 in legal fees. Judge Jacqueline Davies said the tweet was “menacing in its content and obviously so. It could not be more clear. Any ordinary person reading this would see it in that way and be alarmed.”

British comedian Stephen Fry has already said he’ll pay the full amount of the fine for Chambers and other Twitter users have shown their support by re-tweeting the original message with the hash tag #IamSpartacus, which is to say thank God not everyone’s as fucking humorless and half-witted as Judge Davies.

And all of this reminds me of Joe Lipari, who was profiled back in September on This American Life. Back in 2009, Lipari, a stand-up comedian, had some trouble at his local Apple store after his iPhone broke down. After waiting hours for a new one, Lipari went home unsuccessful, and angry with the unhelpful store clerk, set his Facebook status to: “Joe Lipari might walk into an Apple store on Fifth Avenue with an Armalite AR-10 gas powered semi-automatic weapon and pump round after round into one of those smug, fruity little concierges.” A parody of a famous line from Fight Club, you may remember:

Lipari was charged with making terrorist threats, and his case has been tied up in court for more than a year. I don’t know about you, but I sure feel safer.