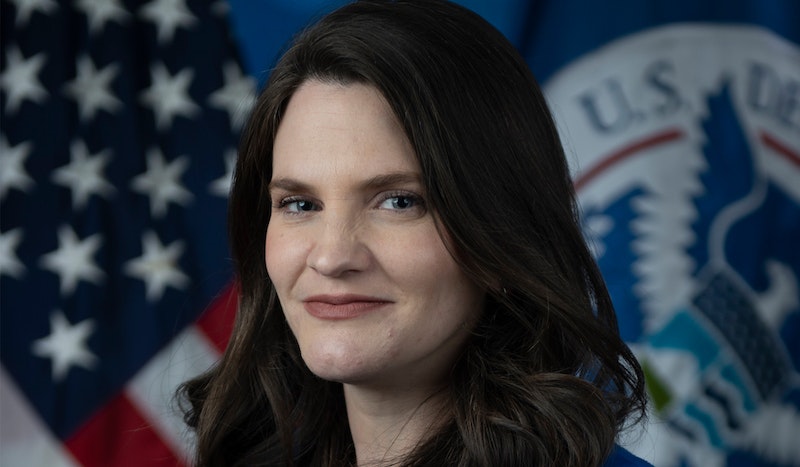 Reasonable people can agree that "disinformation" is bad, so why is the recent announcement that the Department of Homeland Security has just formed what's to be called the Disinformation Governance Board so controversial? After all, DHS has assured us that the new body "is an internal working group that was established with the explicit goal of ensuring… Americans' freedom of speech, civil rights, civil liberties, and privacy."

First, there's the name of the agency, Disinformation Governance Board, which has prompted the inevitable comparisons from the Right to Orwell's Ministry of Truth in 1984, which sought to rewrite history via the media, entertainment, fine arts, etc. And while those comparisons will turn out to be over the top (DGB doesn't appear to have much real power) they could've been avoided entirely with a less chilling, less tone deaf choice of words.

Another assurance the DHS made was citing White House press secretary Jen Psaki's claim that the DGB (the shortened form provides an invitation for comparisons to the KGB) would merely be carrying on activities that previous presidential administrations, including Trump's, have pursued. I’d need more than Psaki's word on that one. If the DGB's just going to carry on as usual, then why create a separate organization to do the same thing, and name a new disinformation czar, Nina Jankowicz, who has a clear political agenda, to head it.

Psaki has also assured us that the DGB will be non-partisan and apolitical, which is belied by the fact that Jankowicz, a partisan activist and fellow at the Wilson Center with no government experience, got the appointment. Exhibit number one in making the case that the specialist in disinformation in Eastern and Central Europe is way out in left field is the weird, unsettling TikTok video she made in which she sings her version of Mary Poppins' "Supercalifragilisticexpialidocious." A sample of the embarrassing lyrics, sung by someone looking unhinged in the true-believer way: "Information laundering is really quite ferocious. It’s when a huckster takes some lies and makes them sound precocious." And then there's this one: "When Rudy Giuliani shared bad intel from Ukraine. Or when TikTok influencers say COVID can’t cause pain. They’re laundering disinfo and we really should take note. And not support their lies with our wallet, voice or vote – oh!"

Prior to the video, Jankowicz had called the Hunter Biden laptop story a "Trump campaign product," and "Russian disinformation.” This would be an example of a huckster taking some lies and making them sound "precocious." It looks like Giuliani isn't the only one sharing bad intel.

We're getting a disinformation czar who can't recognize disinformation when she sees it, or doesn't mind spreading even if she does. Ironically, Twitter, in one of its most egregious moves, suspended the New York Post account for correctly reporting that the laptop found in a Delaware computer repair shop was indeed Hunter's, while it took no action against Jankowicz for trying to discredit the story for political reasons.

It's important to distinguish between "disinformation'' and "misinformation, a distinction most of the media, from the beginning of this story, has either been unable, or unwilling, to make. "Disinformation," a Russian staple, is making up stories for strategic purposes. It's what the original "fake news" (before the definition broadened) was all about. "Misinformation" refers to the unintentional dissemination of incorrect information due to ignorance, making it the lesser of two evils. So was Jankowicz spreading misinformation or disinformation on Hunter Biden and the discredited "Steele dossier," another debunked narrative she's promoted? As those stories were both fabricated for political purposes, with zero credible backing evidence, I'd lean towards "disinformation," thus suggesting she's unqualified for her new job.

When DHS head Alejandro Mayorkas said that Jankowicz was an "expert in disinformation," he left himself wide open for some cutting jokes. And when Fox News reporter Peter Doocy pointed out to Jen Psaki that Jankowicz had called the laptop story "Russian disinformation," and then asked if we should look forward to the new DGB chief censoring stories on that topic, the press secretary changed the topic. Checkmate, Peter Doocy.

In September 2021, Jankowicz testified in front of the British House of Parliament about “gender misinformation” being a "threat to democracy." At this point, it's common for progressives to call everything they dislike a "threat to democracy," but this is about as far off the deep end as I've seen this type of alarmism go. By calling what she calls "gender misinformation" such a grave threat, Jankowicz is laying the groundwork for government censorship.

The Disinformation Governance Board looks destined to fall into obscurity after the conservative furor abates. It's questionable that the new agency will accomplish much of anything other than allowing the Biden administration to grandstand about protecting the freedoms of the American people. The DGB doesn't have the power to censor Americans, despite what Fox News might tell you. It's aimed at foreign nations—Russia, in particular.

The formation of the DGB, with an activist at the top, is a clear politicization of DHS, which was already routinely fighting disinformation from foreign adversaries in a non-politicized manner. Elevating Jankowicz, who has her own disinformation problem, is an overtly political act. Moreover, Jankowicz may use her new high visibility to disseminate more Mary Poppins TikToks, which is the scariest part of this whole affair.