Ortolan, the French culinary indulgence enjoyed only behind closed doors. 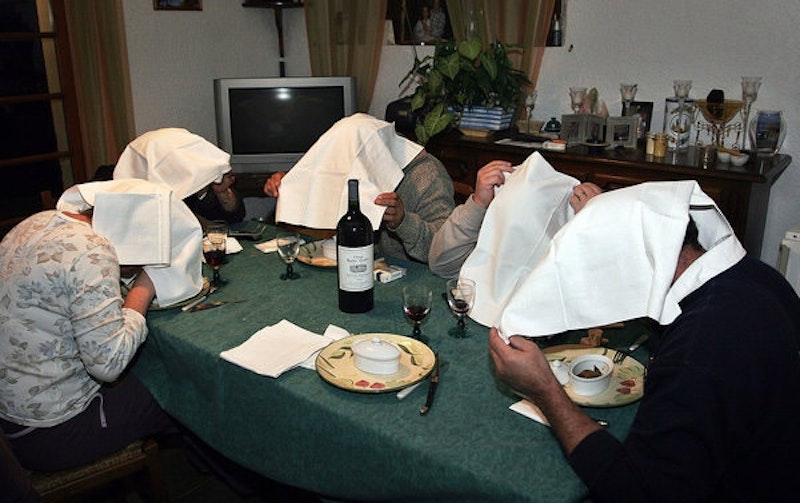 French president François Mitterrand knew he was near death as the year 1995 came to a close. With advanced cancer, he required daily doses of Demerol, Dilaudid, and Elavil just to make it through the day in a druggy haze that dampened his pain. But before departing, the 79-year-old Socialist leader known to some as the "Sphinx" wanted to make a final gesture to demonstrate he could still exert control over his fate. His ceremony des adieux was going to be one last orgiastic feast for 30 people on New Year's Eve, after which he'd decided to eat nothing more as he waited to die.

When the day arrived, wine flowed and there were copious amounts of foie gras, oysters, and capon. Finally, Mitterrand shrouded his head under a white cloth napkin before eating the last bite of food in his life—roasted ortolan, the tiny, yellow-throated songbird that some believe is the apotheosis of the French cooking tradition; a dish that embodies the soul of France. Mitterrand lingered over two of the minuscule birds. He died eight days later.

The tray of ortolans, each of them weighing less than an ounce, caused a stir when it arrived at the table. A number of guests refused to partake. Some consumed it eagerly, while others tried it and spit it out in disgust. While it was still legal in France (it no longer is), the EU had banned the bird's sale in 1979 because of its dwindling population. And then there's how it's consumed—straight out of the oven, feet first into the mouth, and then the head, minus the beak. Its guts, bones, internal organs, and meat, all in one steaming, crunchy bite that the teeth, with some effort, mash into a paste to be swallowed. The large napkin draped over the head is to trap the aromas so they can be savored, and to cover up unsightly displays—it may be necessary to spit out larger bones. Some claim it's to gather the senses so that one can fully concentrate on the experience. The napkin's part of the ortolan mystique—an adornment that lends a cultish feel.

According to Chef Michel Guérard, who prepared ortolan for both Mitterrand and his successor Jacques Chirac, "To eat the flesh, the fat and its little bones hot, all together, is like being taken to another dimension.” The New York Times has touted ortolan as "The gastronomic equivalent of a visitation from the Holy Grail." But like foie gras, ortolan is surrounded by controversy over how the birds are treated after they're captured in the pine forests of the southwestern Landes region of France. In the wild, they feed in darkness, so after they are trapped they're kept in dark, tiny cages for 21 days and tricked into gorging on millet and grapes to fatten them up. Once the ortolan’s fat has tripled in volume and the bird is twice its normal size, it's drowned in Armagnac, plucked, seasoned with salt and pepper, roasted, and served straight out of the oven.

According to the few connoisseurs who've tried ortolan, the first taste is stunning, with hazelnut overtones and the delicate, succulent flavor of the bird's fat. Some gastronomes, including Anthony Bourdain, have claimed that bone splinters have cut their gums and the inside of their mouth and that the blood released mixed well with the rich, gamey flavor of the ortolan’s intestines. "I bring my molars down and through my bird's rib cage with a wet crunch," wrote Bourdain in his book Medium Raw, "and am rewarded with a scalding hot rush of burning fat and guts down my throat. Rarely have pain and delight combined so well."

Michael Paterniti, who wrote about Mitterrand's final repast for Esquire in 2008, observed that a group of ortolan-eaters fills the air with “wet noises,” including “the crunch and pop of bone and tendon.” He described seeing some uncooked ortolans with “tiny, bloated bodies… their eyes small, purple bruises." The writer traveled to France and was able to find a chef who agreed to prepare ortolan for him, although France had banned it by then. The chef, who believed it was his duty as a Frenchman to serve the food of his region, told Paterniti that he had to contact 40 of his friends before he could get his hands on a few of the rare birds. By that time, trappers had become poachers, and one ortolan could cost up to $200.

At this point, ortolan has morphed from gustatory refinement into a forbidden symbol of gluttony and decadence that mixes the sacred and the profane. It's a culinary symbol of capitalist elitism that comes with the frisson of illicit pleasure and the exclusivity of the "VIP room inside the VIP room." It's no surprise that greedy high rollers in both of HBO's shows depicting capitalistic avarice, Billions and Succession, don the white napkin and crunch away on those tiny ortolan bones. As Succession's money-hungry Tom Wambsgans put it, “Look, here’s the thing about being rich—it’s fucking great. It’s like being a superhero, only better. You get to do what you want."