The CYA Maneuver For the Ruling Class

Reflecting on “the Resistance,” and other delusions of the Trump years. 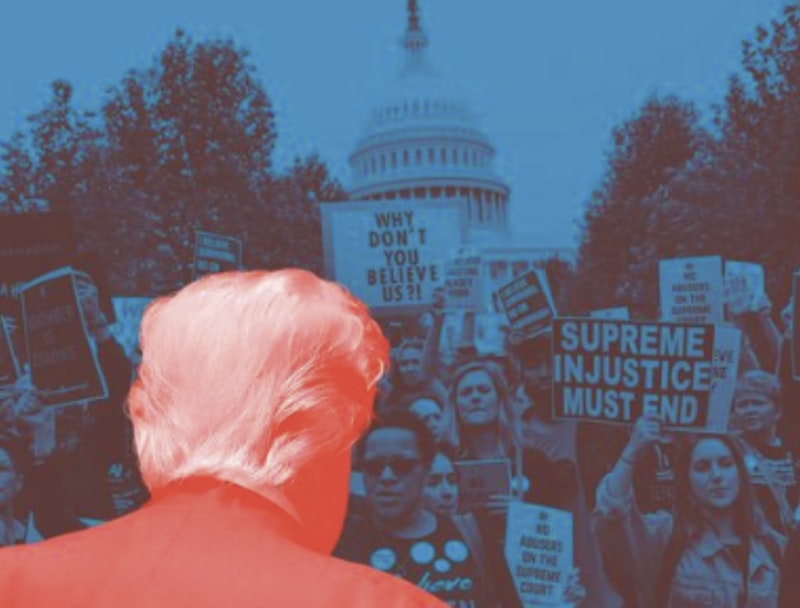 In a recent conversation with a Boomer-aged family member, he remarked: “Not to bring up politics, but I can’t believe Fox News isn’t covering vaccines. I just can’t stand it.” This was toward the end of the conversation and I had to get off the phone. But I wanted to burst out laughing: “Who the hell cares!” Leaving the veracity of the claim aside, what difference does it make? Everyone’s talking about the vaccines! He told me in another recent chat that he’s mostly disconnected from political news since the election.

He should’ve disconnected five years ago.

It’s been disturbing to watch people I know and respect turn into blinkered fanatics in their opposition to Donald Trump. When they look back on the last five years, are they proud of their fixations? Did it make their lives any better? Trump was defeated in the 2020 election, but this was hardly due to the brave work of the #Resistance. You didn’t depose a dictator. You’re just an insufferable narcissist.

Watching Rachel Maddow, buying Seth Abrahamson books and cheering on John Oliver definitely helped someone, but it didn’t save or enrich American Democracy. All it did was enlist you in a war of one set of elites fighting another for the terrain of the bourgeois political consensus.

The core idea of “The Resistance” was always a farce, as it posited the laughable notion that nearly the entire superstructure of the media, academia, financial sector, NGOs, military-industrial complex and upper-middle-class white liberals constituted an anti-authoritarian vanguard. The media posturing was particularly rich, especially if you recall what Noam Chomsky tells us in Manufacturing Consent:

“The national media typically target and serve elite opinion, groups that, on the one hand, provide an optimal “profile” for advertising purposes, and, on the other, play a role in decision-making in the private and public spheres. The national media would be failing to meet their elite audience’s needs if they did not present a tolerably realistic portrayal of the world. But their “societal purpose” also requires that the media’s interpretation of the world reflect the interests and concerns of the sellers, the buyers, and the governmental and private institutions dominated by these groups.”

Think of the sheer amount of non-stories hyped by the media to make Americans feel perpetually under siege. It created this dizzying effect in which every story was “The Big One,” the one that meant “the walls are closing in.” So, what happened? I mean, what really happened that was consequential? If you set COVID-19 aside (a big if, I know), not much actually occurred. Our recollections of dreams tend to be hazy and incomplete. And unless you’ve done your best to stay lucid, these last few years feel hazy as well.

This is by design. The rapidity of scandals and breaking news stories creates a numbing and scrambling effect on the public. This makes it harder for most people to remember individual stories, as real reflection would reveal just how trivial they were. Contrary to this, we were made to think we were living in historic times. Serious reporters talked as if we would one day tell our grandchildren about some Jeff Flake speech on the Senate floor. Seriously. I swear to God, if I reach old age and spot anyone telling their progeny about Jeff-fucking-Flake, I’ll pour their last bottle of Ensure right down the back of their maximum-absorbency Depends.

None of this is to deny Trump’s failures as president. On the contrary, the media hysteria around things like Russian meddling and collusion only acted to obscure these failures. Matt Taibbi has done a public service by detailing 25 examples of embarrassing press screw-ups. The resultant writhing of Trump detractors on social media has been akin to a gigantic group edging ceremony, a teeming mass of self-induced rage and hysteria that never quite arrived at a climax. Under this chorus of ruined orgasms, several important things happened, which only the lucid few seem to remember.

Trump fed on and contributed to this degeneration of the public consciousness. And why not? It was a convenient distraction from having passed a tax cut during an economic expansion, failing to pass major infrastructure legislation, continuing the drone war, hiring and relying on incompetent morons, and disgracing himself through his own petty insecurities. (Don’t the obsessive shock troops of the Resistance realize they became, through their own hysterical behavior, the mirror-image of Trump?)

But it obscured much besides Trump. It provided cover for the failings of the Obama administration and its allies. Imagine if Obama had really fought for stimulus checks or used eviction and foreclosure moratoriums in 2009. The various pandemic relief bills and executive actions show just how ineffectual Obama’s approach was. And with COVID vaccines provided at no out-of-pocket expense to the American people, with the justification that it’s a genuine public health emergency, doesn’t this show just how awful Obamacare was?

We can go still further back, into the Bush era. By entrancing its viewers with the dangers of “nascent fascism” under Trump, it allowed the worst people in American public life to crawl out of the darkness. Across the board, cheerleaders for the Iraq War, warrantless surveillance, torture and CIA black sites rebranded themselves as defenders of the Republic. Seemingly overnight, the fickle and shallow mind of mainstream liberalism forgot or forgave Abu Ghraib, the deaths of hundreds of thousands of Iraqis, the indefinite detention without trial of prisoners at Guantanamo Bay, and everything else that Obama ran against in 2008.

I could stomach Bill Kristol, David Frum, Michael Hayden, James Clapper, John Brennan, and all the swindlers of the Lincoln Project having a redemption arc — if they were open and penitent about their own failures. George Kennan, the author of America’s containment policy during the Cold War, began to openly criticize and question its validity almost immediately after it was instantiated by the Truman administration. There’s precedent for genuine turnarounds in American governance. That did not happen here.

Finally, it obscured the wider policy failures of the last several American administrations and the entire system of elite institutions. It was a CYA maneuver for the ruling class.

One of the great tragedies of the Trump era is the poisoning of those issues that Trump prioritized in 2016. Trump deserves a lot of the blame for this, which is part of why he deserved to lose last year. The Foxconn debacle in Wisconsin is a particularly instructive example. However, deindustrialization, the realities of globalization felt by American workers, and the burning hatred and contempt the media, academia and the entertainment industry feel for ordinary people are real issues. By branding these concerns with Trump, elites sent a clear message to everyone: If you talk about these things, we’ll destroy you, we’ll take everything from you, we’ll show you no mercy. This is what “cancel culture” is really about—not a war of ideas, rather the maintenance of institutional power.

And now in 2021, it allows elite institutions to further their agenda of turning everyone into singular market units, engaged in all areas of life from a purely transactional standpoint. There are ways of reframing and updating the role and importance of the nation-state, the family, and other traditional pillars of industrial society. This should be the agenda of any genuinely progressive political project. But it’s not the project of the elites and the “radicals” who do their handiwork.

The project is to leave you isolated, with only your place in the market landscape to situate you in the world. By eroding concepts like personal dignity and self-worth, the refuge of the family, and the feeling that you’re part of something greater than yourself, every bulwark of solidarity that gives people a real check on elites is destroyed.

This is why self-obsessed, highly credentialed upper-middle-class suburbanites of all political persuasions united against Trump. Trump’s presidency was its own circus of lies, embarrassments and incompetence. But just the shadow of a threat to the elite agenda was enough to strike a nerve across mainstream liberals, Lincoln Project–conservatives, and the post-Occupy Wall Street left. This coalition comprises the people who have benefitted the most from the shifts in American life since the late-1970s, both positive and negative, and who would stand to lose the most if things went in a different direction.

This should not leave us feeling hopeless or powerless. I’ve heard some people I admire say that the last few years show how public opinion is essentially meaningless. I get the sentiment behind this, but still disagree.

What to do then? It’s what honest people within the media should’ve done all along regarding Trump. Disengage. Starve the machine of its raw material: you. Find one or two big publications or outlets to get a general splash of “what’s going on.” But always look with the filter that “this is what the powerful care about,” even in the case of good writers and reporters. Give them one less person who cares about Fox News not covering vaccines. With the post-Trump drop in cable news ratings, observers are saying many mainstream outlets could be on the verge of a collapse. Not a moment too soon.