Bernie Madoff Died in Prison and the Judge is Glad

Judge Denny Chin's chilling comments yesterday show that our justice system is based on retribution and cruelty more than anything else. 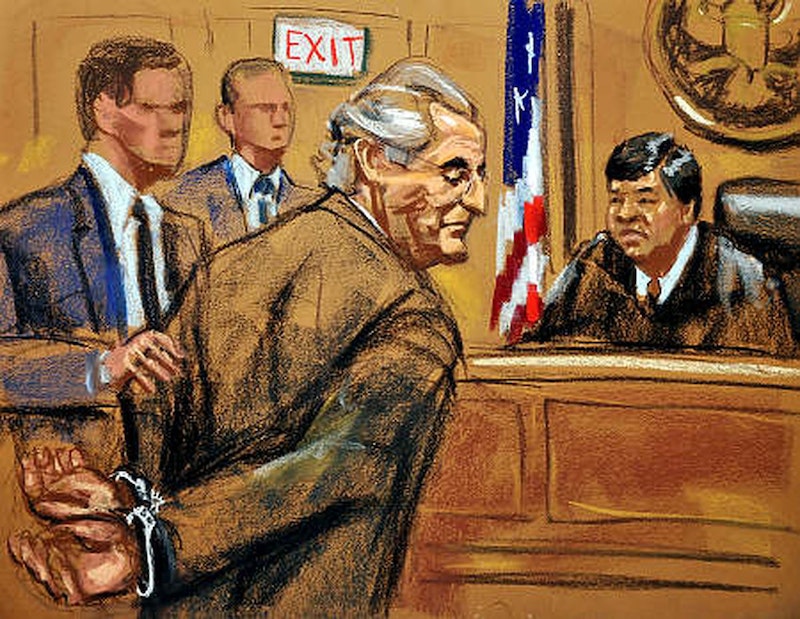 Diagnosed with terminal kidney failure last February, Ponzi scheming hedge fund manager Bernie Madoff sought early release from prison, accurately telling the court he had about 18 months to live. The judge who sentenced him to serve 150 years was unmoved and Madoff died in prison, as the judge intended.

"When I sentenced Mr. Madoff in 2009, it was fully my intent that he live out the rest of his life in prison," Judge Denny Chin wrote, in response to Madoff’s request for end-of-life mercy. "The symbolism of a 150-year sentence was important: the public trust had been eroded by Mr. Madoff's ability to manipulate the system for so many years, he deserved to be punished according to his moral culpability."

CNN and others call Madoff’s $20 billion fraud the “largest financial fraud in history,” which would seem to back up the judge’s claim about Madoff uniquely injuring the public’s trust. But, if you lived through the financial crisis or covered it, you know that’s not quite right. Lehman Brothers, brought down by its own accounting standards and business practices, was worth three times what Madoff is said to have stolen. Meanwhile, the U.S. government invested more than $500 billion to stabilize private financial services companies, even as many of them were seizing people’s houses during the worst of the recession.

Madoff symbolized the financial crisis but he really had nothing to do with it. He simply got caught when other, more serious shenanigans had pushed the economy into collapse. Madoff lied and stole, but most Americans never had any contact, even peripherally, with his fund. Madoff stole from a mostly elite clientele of celebrities and wealthy families who were attracted by his promise of steady returns with little risk and whose advisors transferred money to Madoff without demanding transparency about the strategy.

Madoff’s unraveling led to major changes in the asset management industry, mostly for the benefit of investors. Chastened by the size of the fraud, investors began performing more detailed diligence, demanding to know how money will be managed and to see what’s in their portfolios on demand. They began only investing in funds using independent, outside administrators to handle the accounting, trade clearing and, most importantly, custody of funds.

While there’s no defense for Madoff’s fraud, the failure of $60 billion Enron, which took the savings of Enron employees who were encouraged by management to load up their personal accounts with company stock, was far more impactful to typical Americans. It’s not like Madoff was manipulating California’s spot electricity markets and stealing right from the wallets of utility consumers on fixed incomes.

Chin ties Madoff to the “public trust,” but Madoff wasn’t well-known before the fraud and never symbolized capitalism, investing or the financial system. Were somebody to really shake your faith in the financial system between 2002 and 2010, it would probably be a mortgage broker offering an adjustable rate product with the promise that interest rates would remain low and your home value would forever climb.

As a financial crisis fall guy, a Ponzi Schemer like Madoff is a great character. He’s indicted by his own greed and delusions and we can also tisk at his clients, who should’ve known better. But the financial crisis would’ve happened with or without Madoff and faith in capitalism would’ve survived him dying while under house arrest.

End-of-life leniency for Madoff would’ve highlighted class and racial inequities in how our system metes out mercy. The Prison Policy Initiative says that 10 percent of the prison population is over 55, and the number is dramatically higher in some states. They also note that prison life shortens life expectancy and hastens aging. Anybody reading this can name older prisoners as deserving, or more deserving of compassionate release than Madoff would’ve been. That’s fine. I expect there would be few cases where I wouldn’t support the release of infirm and elderly prisoners.

Chin’s comment about his intention for Madoff to die in prison should chillingly remind us that our system is based more on retribution and punishment than it is rehabilitation, proportionality or even the safety of society.