Innocent Americans Are Pleading Guilty to Save Themselves

The plea bargain is our hidden force of authoritarianism. 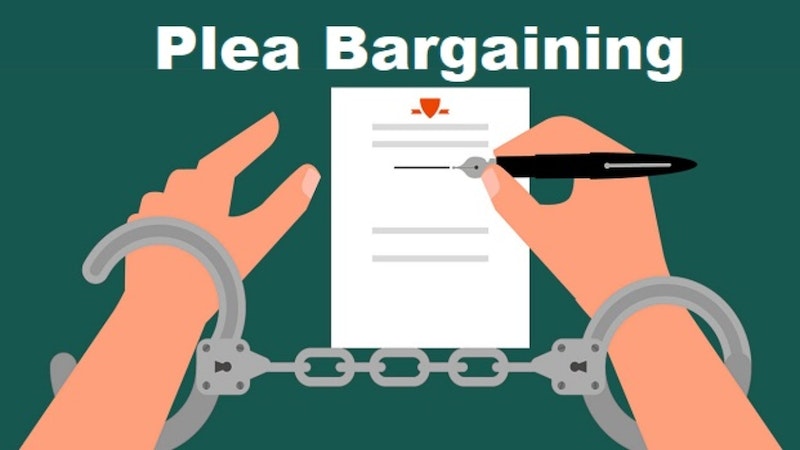 Many Americans are aware that their criminal justice system imprisons a higher percentage of its population than any other nation. But the systemic malaise, which begins with the first contact between police and a suspect, runs much deeper than that. The public knows little about the behind-the-scenes crudeness of the American justice system because the media present a fantasy version of it resembling the old Perry Mason show in which criminals were caught and then put on trial. But putting felons on trial in present-day America has become as outdated as bell-bottom jeans.

One appalling byproduct of almost all jury trials getting phased out is how many innocent people facing felony convictions are pleading guilty and taking a deal because they don't trust the system and want to avoid the worst-case scenario.

About 11 percent of the DNA exonerees recorded by the Innocence Project since it was founded in 1989 pleaded guilty to crimes they didn’t commit. Overzealous prosecutors may have put them behind bars, not because they were certain of their guilt, but because they wanted to beef up their conviction rate—in other words, "because they could." There's substantial data indicating that black men and other minorities are the biggest victims.

An analysis of what's gone wrong starts with the fact that the plea deals now used to resolve around 97 percent of felony indictments have conferred tremendous power upon prosecutors. The Founding Fathers believed that the jury trial was a strong defense against government tyranny. Without jury trials, the government finds it much easier to run roughshod over the principles of the Constitution that it's charged with protecting. While the media and Hollywood portray a government that adheres to the Sixth Amendment's guarantee of a "speedy trial" by jury—the televised trial of Derek Chauvin will boost that misunderstanding—in reality agents of the government have become the dominant power in both determining guilt or innocence and the length of the sentence.

Prior to the Civil War, plea bargains were rare, meaning judges were determining sentences, and defense lawyers had more input. The Supreme Court was initially skeptical about the introduction of the plea bargain, but that didn't last long. As defendants began to see the diminished power of both their defense counsel and the judge, they felt less confidence in avoiding the long prison term that prosecutors now use as a bargaining chip. The stage has been set that it’s rational for an innocent person to plead guilty in some cases.

Inhuman legislation such as the Rockefeller laws of 1973 in New York State, which imposed a minimum sentence of 15 years for selling two ounces of marijuana, provided prosecutors major weapons in extracting plea bargains. Federal mandatory sentencing laws contributed to the power shift. Moreover, while a prosecutor has access to information on a felony case, even before an arrest is made, a defense attorney's information-starved when they take on a client, often because it's hard to get access to the client in jail. The prosecutor, who may already have a mandatory sentence bludgeon, goes into the initial meeting with the defense attorney with confidence and bargaining power, usually demanding a fast plea deal, which ups the pressure on the defense. Prosecutorial leeway in setting the charges tips the scales even more. A prosecutor can offer a guilty plea to a personal drug sale charge that carries no mandatory sentence, backing it with a threat that a refusal means they'll bump it up to a "conspiracy" drug distribution charge that carries a stiff mandatory sentence.

Prosecutors, who are judged on how "tough on crime" they are, have no incentive to offer compassion and leniency, and they realize the judge no longer presents much of a defense against their zealotry. The plea bargaining process is carried out in secret, rendering it unreviewable. It's the polar opposite of a public trial. Defendants with few resources and a checkered past often have substantial insight into a justice system they know they can't trust. Sometimes this pushes them into lying to their own lawyer in the interest of self-preservation.

The state has plenty of reasons to avoid jury trials, such as saving victims from having to testify, clearing judges' dockets, keeping police on patrol instead of waiting to testify, sparing the high cost of a trial, and reducing the need for more judges.

You'll notice that all the above reasons are aligned with the interests of the state, not the rights of citizens. To get a glimpse at what this one-sided approach has produced, do some conservative calculating and cut the Innocence project's exoneree figure in half, meaning around five percent of all innocent felony convicts plead guilty. Even such a low-ball estimate would mean that approximately 100,000 innocent people helped put themselves behind bars, serving long sentences. That's shamefully high for the nation of "American exceptionalism" that's already imprisoning too many for non-violent crimes.