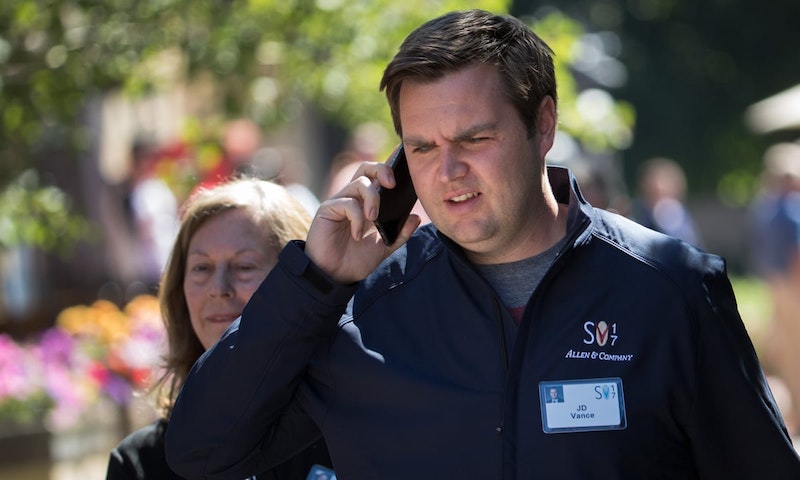 In politics, bashing capitalism remains the easiest way to please a dim-witted, ignorant mob, such as an Ivy League classroom. Turncoat hucksters like pseudo-conservative J.D. Vance, author of Hillbilly Elegy and possible 2022 Senate candidate in Ohio, and his numerous imitators should be seen as just one more variant on that shameful strategy.

Another of humanity’s oldest rhetorical tricks is telling an audience, “I was just like you once, and I still fully appreciate everything you’re saying but am more enlightened now, so follow me and I’ll address all your concerns and then some.” You hear it all the time from, for instance, people who claim they were atheists until seeing the light and finding God—though a quick check of their pre-conversion statements invariably reveals they were irrational, nutty mystics even in the old days and just hadn’t settled on a specific faith yet.

Likewise, politics is filled to bursting with people who tell you they used to be Wall Streeters, libertarians, CEOs, hardcore Republicans, and then discovered Karl Marx (a terrible philosopher, worse writer, and utterly incompetent economist, responsible in the long run for the deaths of over 100 million people) or some other anti-capitalist thinker and changed their lives, hallelujah, becoming tribunes for the downtrodden masses and so forth.

Yet they never quite find the time to present you with knock-down economic arguments against the ideas that make strict property rights and free markets good principles: ideas such as supply and demand, prices as signals, decentralized information, the potential in every un-coerced human interaction for mutually beneficial exchange, the investment advantages of secure property and secure contracts, and the moral benefits of trying to please customers instead of threatening to jail them.

It’s frustrating, then, to see how many young people, even on the right, think they are rebellious discoverers of new ideas while they regurgitate the same predictable anti-capitalist laments churned out by the left for over a century.

Adding insult to injury, the young right-wingers who are turning against capitalism, against global trade, even in some cases against the “bourgeois” morality that undergirds these systems, are convinced they’re fighting the right’s political enemies like no prior generation—obsessed in a juvenile, embarrassingly insecure way with the idea that anyone who doubts their methods is “surrendering”—while in fact these pugnacious, naïve little jerks are submitting like perfect drones to the anti-capitalist narrative laid out for them by generations of left-liberal professors and activist apologists for communist mass-murder.

That’s not to say one can’t point to a long conservative tradition of anti-market voices such as cruel 19th-century essayist Thomas Carlyle, who was denouncing the public for being too materialistic and leading overly comfy lives back in the early-19th century, a time when most of us wouldn’t feel overly comfortable were we to pay a long visit. Most of Carlyle’s contemporaries were doomed to extreme poverty and paltry 40-year lifespans.

As I told one conservative acquaintance of mine who sounded a bit like a latter-day Carlyle as he complained that capitalism wasn’t helping him spend time with his children—and as someone should tell J.D. Vance the next time he gives a demagogic speech about choosing “my child” over free markets—back in Carlyle’s time, two centuries ago when many of today’s anti-bourgeois youth probably think they’d have been happier and freer, most of the kids under discussion, Vance’s child likely included, would’ve been dead by age 10 from hunger or youthful diseases that modern capitalism has almost completely vanquished since then.

In any case, having an intellectual pedigree is by no means the same thing as being right, as many conservatives, Marxist scholars, liberal academics, and Catholic theologians need to be reminded regularly, lest they imagine that piling up enough classics, old manifestoes, footnotes, or papal encyclicals (respectively) can shield them against economic reality or substitute for clear economic reasoning (such as that found in the laissez-faire Austrian School). Not everything old is nonsense, but a lot of nonsense is old—and nonsense it remains even when organized as cross-references, traditional lore, or positive peer reviews.

The anti-capitalists usually only “win” their imaginary political debates against capitalists (ducking or nowadays angrily boycotting the real debates) by rolling out the ultimate false dichotomy, which people across the political spectrum continue for some reason to find intuitively appealing: You must either care about people or be a capitalist.

Not only are conservatives like Vance happy to perpetuate that lie, but multiple ostensibly “libertarian” factions seem content to play along with it as well. Ayn Rand denounces altruism. Various online libertarian trolls parade their callousness as if it’s an achievement. Some weirder corners of the far-right part of the movement liken themselves to Satanic ubermenschen. And paleo pugnacity abounds, as if the latest street brawl at a protest matters more than maintaining the civil society that politely tolerates those street brawls, for now.

All of that anti-empathy bravado plays right into the hands of the left, who can go on pretending to have a monopoly on kindness and altruism. What an unforced error on the part of the non-leftists.

Adding to the unforced errors are those liberal-leaning libertarians who, instead of patiently teaching people how laissez-faire policies benefit the mass of humanity (as Adam Smith strove to do), take a pass on all that and instead pride themselves on concocting ways to water down libertarian philosophy, laws, and freedoms, adding a dash of welfare-statism here or government spending over there, maybe tossing in some kind words for environmental regulation, urban planning, or military modernization, as if it’s all just a collage they’re whimsically putting together with a computer graphics program. Watch me stick Tyler Cowen’s big-government “state capacity libertarianism” over here in the corner where professors and major newspaper editors can see it and applaud—whee! Demolishing one’s own philosophy is so easy—and earns such welcome cheers from the establishment!

But despite what some would-be moderates would have you believe, there’s nothing “compassionate,” “bleeding-heart,” nor “elegiac” about pretending curbs on markets increase human happiness. It’s a lie that will be eagerly transformed into pro-government rhetoric by opportunistic politicians such as Sens. Josh Hawley and (hypocritical, sugar-and-bombs-loving corporate-subsidies defender) Marco Rubio—and perhaps soon a Vance.

“The failure to use political power that the public has given [to government] is a choice, and it’s a choice that has increasingly had, and I think increasingly will have, incredibly dire consequences for ourselves and our families,” said Vance in a prominent speech two years ago. Spoken like a socialist. Or maybe a fascist. But certainly not like someone who understands how dangerous a temptation government power is. If you send him to Washington, how long will it be before he’s defending things like Biden’s trillions in pork barrel “infrastructure” spending while claiming it’s the best way to make good on the ease-of-travel solution he has offered as one of his few concrete plans for improving rural life (which is to say, helping people get the hell out of there)?

Thiel, by the way, has his good points but is also a tech tycoon who owns a psychedelics company branching out into mind-computer interface and brain-control technology. Is Vance so sure Thiel will help those cash-strapped rural folk overcome their opioid dependency, or are capitalists in the Thiel mode just going to replace Big Pharma’s sales pitch with a more electronics-based one?

Like Tucker Carlson or Christopher Caldwell, the newly-anti-capitalist conservatives are just as quick as conventional socialists to assume that if there’s a problem in the marketplace, inhibiting markets must be the solution. Can we at least try reducing government interference in markets and see what happens—not just reducing haphazardly or in the way that most quickly and easily pleases a few prominent donors but by cutting huge swaths out of the parts of big government that seem to cause the problems? The pretense government dwindled in the 1990s and thus that free markets have already been tried is a damaging enough lie when the left believes it, but if the right believes it now too, all is likely lost.

How about ditching pharma subsidies (increased immensely under George W. Bush) and seeing if that reduces overmedication problems? How about getting rid of the innumerable taxes and regulations that make it harder to run profitable factories here instead of feigning shock when companies “outsource jobs” to overseas locations? How about making an effort to imagine the innumerable new industries (and jobs) that would likely be created in a world of robotic trucks instead of thinking only as far ahead as the trucker layoffs?

Like socialists, the new anti-capitalist right-wingers fail to make the convincing policy arguments they need (though they can gussy up unconvincing ones as think tank whitepapers in a pinch). They just assume—or in the case of populist politicians, probably just pretend to assume—that the necessary policies are obvious and anti-capitalist. They’ve memorized their leftist professors’ lessons well after all. The thought that more capitalism might be the answer to the problems they address never really crosses their minds—nor does the possibility that philosophical defenders of laissez-faire capitalism might be motivated by those very same problems. Adam Smith, for one, rightly feared the poor would starve if corn prices were regulated by the government.

At their most brazen, the anti-capitalist conservatives sometimes pretend to be staving off spiritual collapse in the heartland or (among younger and more far-right agitators) the death of manly purpose—but nothing says cowardice and surrender like turning to government as the inevitable answer, century after century.