The Cost of a Vote

The country heads down the stretch toward what almost certainly will be a chaotic midterm election. Are Democrats gaining even in—or, in some cases, leading—races that were once sure things for Republicans? 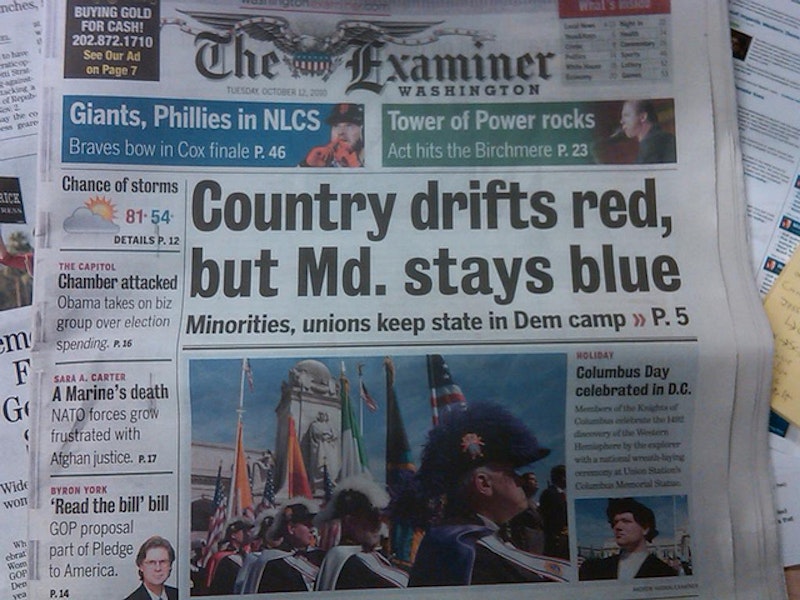 There comes a point in every election where nothing can be done to alter its outcome and all anyone can do is to sit back and watch it happen. We are at the intersection of inevitability and outcome. The media buys have been made. The campaign signs are up in all of their Crayola splendor. The debates have been staged, the volunteers are energized, the phone banks are dialing their incessant robocalls, the walk-around money has been promised or paid and the polls are in. The voters’ minds are pretty much made up, and all that’s left is for the candidates and their campaigns to deliver the vote.

The only aspects of campaigns that polls can’t plumb are organization, turnout and the weather. The final push for the next week is all about intensity of the effort. Presdient Barack Obama has been welcomed in Maryland to campaign for Gov. Martin O’Malley (D) as has former President Bill Clinton and Vice President Joe Biden as Democrats stage a major production to motivate the black and youth votes. The top of the Democratic ticket is further strengthened by the presence of Sen. Barbara Mikulski, by all measures the most popular political personality in Maryland. On the Republican side, Former New York Mayor Rudy Giuliani came calling to lend friendly support to Republican Robert L. Ehrlich Jr. But the Republican Governors’ Association has cut back its advertising contribution to Ehrlich, a signal that they believe his chances of winning are fading or that he’s in such great shape that he needs no further help.

This is Maryland’s first general election experiment with early voting, which was a letdown, if not a downright disaster, in the primary when only 75,000 voters took advantage of the newly legalized convenience and only 23 percent of Maryland’s more than three million registered voters actually participated in the primary. There are 47 early voting locations across Maryland and from all early indications Democrats have taken full advantage of the new attraction. It appears the habit is catching on.

But primary and general elections have different purposes and outcomes. Primaries are family feuds where party voters sort out the candidates and pick the one they believe is a winner. General elections are for real and are based on personalities and issues. And a major difference is that the more than half million registered independents that are ineligible to vote in party primaries can cast ballots in the general.

And another first for Maryland is being test-driven in the general election. Absentee ballots are now available to anyone as well as on-line with a supposedly secure cross-check number to prevent multiple voting for those who prefer to vote at home or at the office instead of a polling place. Applicants for absentee ballots among Democrats are up 15 percent from four years ago.

There are very few, if any, combustible ballot issues to draw out voters. Only one has visceral appeal, and that is the local zoning battle in Anne Arundel County over the location of a slots emporium – Arundel Mills or, as the matter stands, technically none at all. If ballot Question A (yes, on Arundel Mills) is defeated, the entire zoning issue would have to be reprised to relocate a slots parlor. The other ballot question is strictly for wonks and government junkies and is legally required to appear on the ballot every 20 years: Should a convention be called to rewrite the Maryland Constitution?

But Democracy in action doesn’t come cheap. The Ehrlich campaign has reported paying the pay-to-play Democrat, Julius Henson, consulting fees reaching upward to $100,000, presumably to create mischief and surpress the voter turnout in the black community where O’Malley is relying on a heavy turnout in Baltimore City and Prince George’s County. In their first face-off in 2006, Ehrlich’s campaign bused homeless men from Philadelphia to distribute fraudulent and misleading literature in PeeGee County. And in that year, Ehrlich also refused to hire Henson over what he privately characterized as a “shakedown.”

To monitor such activity, Democrats have established a team of poll-watchers in key areas of the state, and Republicans similarly have what they euphemistically refer to as “voter integrity” squads. The Democratic Party has held a news conference to warn voters not to be intimidated and to promptly report any attempts to challenge their right to vote.

The two major battlegrounds in the race for governor are the Baltimore Metro Area, especially Baltimore County, where O’Malley must cut into Ehrlich’s vote as he did in 2006, and Montgomery County, where Ehrlich must try to overcome a huge Democratic majority as well as O’Malley’s personal popularity in his natal county.

The campaign for governor, fiercely fought on television and in debate, resembles the second contest between Parris Glendening (D) and Ellen Sauerbrey (R) in 1998. As in that one, O’Malley and Ehrlich have run neck-and-neck in the polls all summer and through the early fall until about two weeks ago when the contest appeared to break wide open in favor of the Democrat, O’Malley. Pick your poll: The Sun, 14 points; The Washington Post, 14 points; Rasmussen, 8 points; Gonzales, 5 points. In fact, Scott Rasmussen, the Republican pollster, was a guest two weeks ago on WBAL Radio and predicted flat-out that O’Malley will be reelected. O’Malley has been endorsed by the Washington Post, which endorsed Ehrlich four years ago.

The only other closely watched race in Maryland is also a re-match in the trans-Bay First District between Rep. Frank Kratovil (D) and State Sen. Andrew Harris (R), whom Kratovil narrowly defeated two years ago. National groups have invested heavily in both candidates and Vice President Biden is sponsoring a last-minute fundraiser for Kratovil this week. Kratovil had been clocked as one of the most endangered incumbents in the country. But late in the game, Republican interest groups sharply reduced their financial and advertising contributions to Harris while at the same time the Democratic House Congressional Campaign Committee dramatically increased its investment in Kratovil, a sure signal that they believe they can retain the Kratovil seat.

Much of the speculation all year has been that nationally the Republican party, fueled by the Tea Party marchers, has been energized while the Democrats have seemed feckless and worried. But within the past two weeks, the momentum has seemed to shift toward Democrats as Republican (Tea Party) candidates appeared to botch, blunder and founder and Democratic candidates not only closed the gap but seized the lead. Pennsylvania is a good example and a bellwether state where Rep, Joe Sestak (D) has pulled slightly ahead of Pat Toomey (R) who had held the lead most of the season. And in Delaware, Christine O’Donnell will probably cost Republicans what they once considered a sure pick-up of a Senate seat. Similarly, Teas Party Joe Miller could wind up third in Alaska.

But the Tea Party, like the Princess and the Pea, has barely made itself felt in Maryland, the deepest of blue states with a highly educated constituency and the largest black population of any state outside the Deep South. Democratic nose-counters in General Assembly races, for example, are expecting no loss of seats to Republicans and possibly gains.

With undecided voters down to a barely measurable minimum, the only aspect of the campaign that can be affected now is the intensity of the electorate and the size of the voter turnout. The job of the candidates now is to make that happen.