The United States, in retrospect, was a calmer country in the 1990s, at least economically, but half the electorate's hatred of Bill Clinton wasn't imaginary. 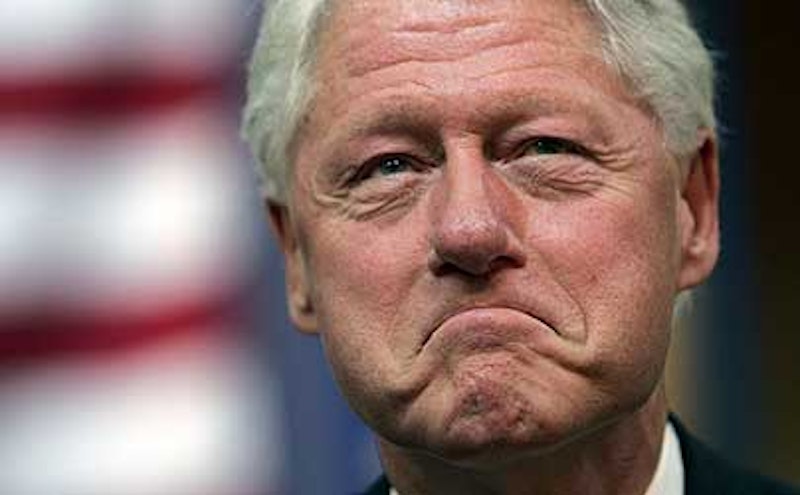 There are countless pre-election notions that can, and do, rankle anyone with a functioning memory, but for me nothing is quite as creepy, and disingenuous, as the Republican revisionism about eight-year reign of Bill Clinton. It’s not a unanimous lament among GOP voters, or right-of-center publications—some people still have their marbles—but when a magazine like The Weekly Standard, which was founded in 1995 (and promptly began the Colin Powell for President boomlet), the year after the Republican takeover of Congress, runs an editorial praising the policies of Clinton, one begins to think that it really is Halloween every day in the political world.

It’s probably no coincidence that the author of “Be Like Bill” is the Sarah Palin-apologist Matthew Continetti, who wasn’t yet 20 years old when Clinton exited the White House, much to the relief of most of the country, aside from hard-core Democrats who didn’t blink when the Arkansan pardoned the crook Marc Rich as one of his last official acts as president. Continetti, in fairness, plumps Clinton for championing free trade (as opposed to Obama’s overt protectionism), signing an overdue welfare reform bill and presiding over an economy that was flush with prosperity, and he does acknowledge that it took the stunning results of the 1994 midterm elections to prod Clinton into reaching an arms-length style of détente with the Republicans.

Yet, Continetti misleads readers when he writes, “[Clinton] went so far as to call himself (privately) an Eisenhower Republican,” as if Clinton was proud of that. In fact, that self-identification wasn’t especially private—it was in any number of newspaper articles at the time—and certainly wasn’t to his liking. Clinton, frustrated (at least ostensibly, for if there’s one thing certain about the 42nd president it’s that his overriding ideology was dictated by what worked to his political advantage), by economic realities, angrily told his cabinet in 1993, “I hope you’re all aware we’re all Eisenhower Republicans now. We stand for lower deficits and free trade and the bond market.” As for welfare, it was a calculated political decision in 1996 to cut off any remaining oxygen from his flawed opponent Bob Dole in that year’s election (Clinton had vetoed two welfare reform bills prior to that).

Continetti is particularly selective about Clinton’s record when he writes that “despite his faults,” he successfully navigated the “Third Way” in politics to unite both parties. Never mind that the Third Way (also bandied about by UK Prime Minister Tony Blair back when he wasn’t considered a villain in the vest pocket of George W. Bush) was ridiculed not only by The Weekly Standard but conservatives in general. As for “despite his faults,” it would take a writer far, far more prolific than myself to provide an explanation to pups just how much Clinton was hated by conservatives.

Hillary’s secretive, and ultimately doomed, healthcare initiatives. Whitewater. Vince Foster. Roger Clinton. The biting of the lower lip in promiscuously phony empathy. And, on the topic of promiscuity, there was Monica Lewinsky and Kenneth Starr and Clinton’s impeachment. While I thought it was rather tawdry that Clinton was fooling around with a young woman half his age, that sort of behavior wasn’t exactly without precedent in the White House. No, what was far more vexing was that Clinton, knowing the news was about to break, had his then-strategist Dick Morris do a quick poll about how he should react. And so he stonewalled, lied about his dalliances, and then ultimately fessed up to the American public, while the media had a ball covering the scorned Hillary and the disapproval of Al Gore. The question was, at least in my mind, if Clinton lied about his own private life, what wouldn’t he lie about?

It’s not just Continetti: in a New York Times story earlier this month, former Senate Majority Leader Trent Lott told reporter Jennifer Steinhauer, “’You know with Clinton the chemistry was right. He was a good old boy from Arkansas, I was a good old boy from Mississippi, and Newt, he was from Georgia. So he knew what I was about, and I knew where he was coming from.” Fellow Republicans, of course, drummed Lott out of power in 2002 after he made a joke about the segregationist presidential candidacy of Strom Thurmond in 1948.

But you expect more from a journalist—at least one from The Weekly Standard, a magazine I like very much—than a politician like Lott, still bitter over his forced resignation eight years ago. The 1990s were, in fact, a far less tumultuous period in American history than today, and who knows how Clinton would’ve governed given the financial crisis that Obama inherited. And it’s just plain fraudulent for any Republican who ranted and raved about Clinton to now reminisce about the good old days when he was president. Don’t they remember “the politics of personal destruction”?