The Audacity of False Hope

We are the unfortunate many, who were here when Cuomo and Fauci ruined America. 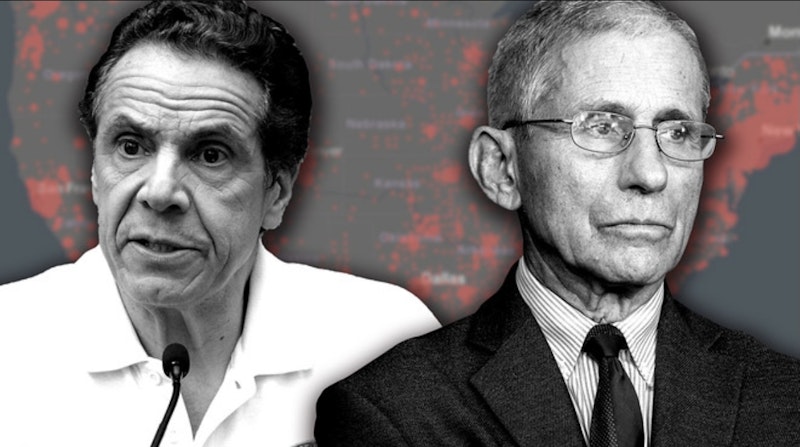 War memoirs may be written for posterity or profit, or read as retroactive prophecies of victory at sea or evacuation by sea, of a battle for the survival of Christian civilization or a crusade for the good of Christians and Jews. But no record of final victory goes to print until victory is won. No memoir goes on sale in the midst of war, during the fog of war, by a wartime politician—except a book of lies, for the good of a political party, by a politician whose tenure is a study in failure.

But only Andrew Cuomo has the gall to play Caesar without the conquests of the worst or last Caesar, or the eloquence of Julius Caesar’s commentaries on Gaul. Only a politician among doctors can succeed Cuomo’s lies with a decalogue of his own. Only Dr. Anthony Fauci’s forthcoming book, Expect the Unexpected: Ten Lessons on Truth, Service, and the Way Forward, can match the audacity of Cuomo’s novel, American Crisis: Leadership Lessons From the Covid-19 Pandemic.

The former is 80 pages, though Fauci has time to wax libelous and add to his catalog of misdeeds before the book’s release on November 2, while the latter is a work by a promoter of the blood libel. The latter bears the name of the governor who bore false witness against a specific people, who chose to rule more like the fifth governor of a Roman province than the 56th governor of the Empire State; who continues to rule 20 million people in spite of 53,923 deaths.

Either Cuomo is a simpleton, or the simpler explanation is terrible but not untrue: that he lowered the cost of long-term care by changing the terms altogether, cutting short the days of the years of the old; that he reduced years to days; that he converted nursing homes into funeral homes, removing 15,745 souls from the annals of the living.

Dr. Fauci praised these results. He praised the illusion of success, not the reality of the destruction of life, liberty, and property. He betrayed the spirit of his profession and the gospel of his faith. With firmness in his right to do harm, he denigrated the rod and desecrated the cross. He was then as he is now, serpentine in his accumulation of power and poisonous in his abuse of power.

The memoirists of today were alive when the best leaders published their memoirs. Gov. Cuomo was a child when the president was a former five-star general, and the president’s former boss was a retired four-star general. The Governor was alive when President Eisenhower was in office, and General MacArthur was without office.

Dr. Fauci was born when the president was a former governor. He was a child when President Roosevelt was commander-in-chief. He was four when Roosevelt died, 23 when MacArthur faded away, and 28 when Eisenhower lay in state.

We are the unfortunate many, who were here when Cuomo and Fauci ruined America.