Slow drip of UFO reports from the government priming the pump for more defense spending. 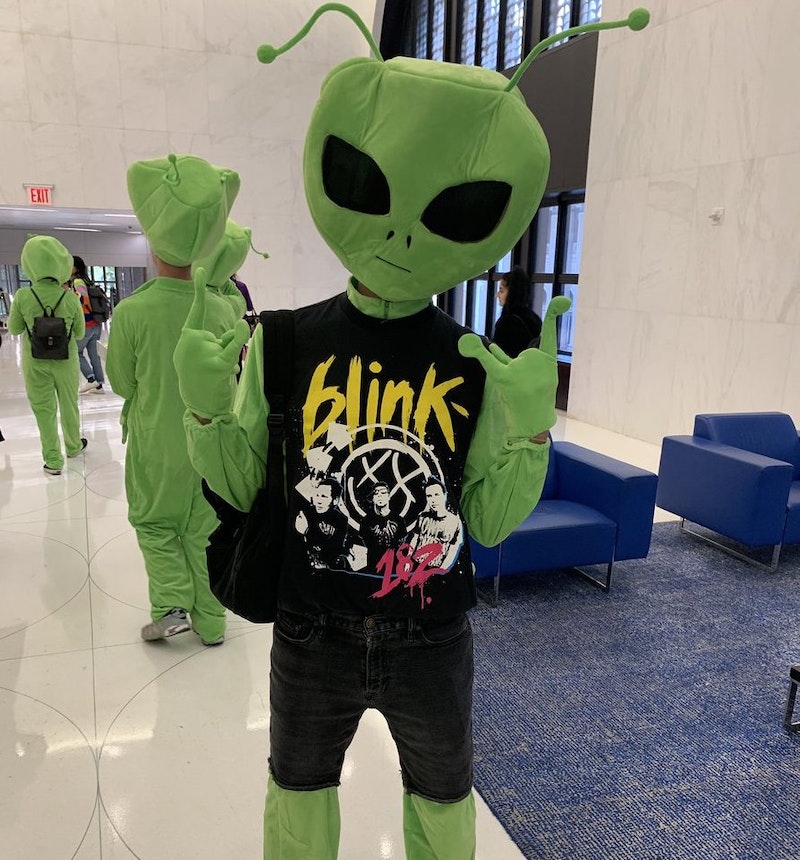 Tom DeLonge must’ve been miserable last week: in addition to further disclosures by our government regarding UFOs, his former blink-182 bandmate Mark Hoppus announced that he has cancer. Maybe DeLonge didn’t know, but it’s been three months—even if they’re still on bad terms, this is cancer. “What’s My Age Again?” only came out 22 years ago. Will Hoppus live to see his song turn 23? What a depressing sentence to type. I’m even less sure how DeLonge feels about the coordinated rollout of UFO news from the government. There were hints before the 2016 election that Hillary Clinton and her administration were going to declassify material after she was coronated.

“John Podesta, chair of Hillary Clinton’s presidential campaign, has declared that he has convinced the former secretary of state to explore declassifying any government documents that may relate to unidentified flying objects. ‘I’ve talked to Hillary about that,’ Podesta told KLAS-TV Politics NOW in Las Vegas. ‘There are still classified files that could be declassified. I think I’ve convinced her that we need an effort to kind of go look at that and declassify as much as we can, so that people have their legitimate questions answered. More attention and more discussion about unexplained aerial phenomena can happen without people—who are in public life, who are serious about this—being ridiculed.”

I imagine they’ve found a different spokesperson by now.

Donald Trump is not impressed: he said last month, “I'm not such a believer, but some people are, so I don't want to hurt their dreams or their fears,” the kind of openhearted statement you’d expect from Ram Dass, albeit with Trump’s particular poetic grace when he’s not being hateful or particularly stupid. I haven’t kept up with him post-presidency, but this statement reminds me of his victory speech in  2016, when he looked and spoke like a man who just tripped on mushrooms for the first time, spiritually clean and nearly free of ego. Oh how long it would last…

From NBC last Friday: “The U.S. government can't explain 143 of the 144 cases of unidentified flying objects reported by military planes, according to a highly anticipated intelligence report released Friday.” The Office of the Director of National Intelligence’s report only included UFO activity from 2004 to 2021, conveniently within our post-9/11 wars. “‘We quite frankly have a bit of work yet to do in order to truly assess and address the threat posed by UAP,’ the senior U.S official said Friday. ‘Not all UAP are the same thing.’”

This comes after paragraph upon paragraph about how vague and inconclusive the report is, which “does not mention aliens or even vaguely hint at an extraterrestrial explanation for the reported sightings,” but nevertheless, as one senior government official said, “we will go wherever the data takes us.” Priming the pump for more guns, missiles, and bullets to protect us against… the sky. Or outer space—make it sexy. Make it exciting. Get The X-Files back in the mix. Maybe this is just a Clintonite obsession, but even with a zombie Biden in the White House, their world and its tentacles can’t be far away from power.

Why is this stuff told in a drip-drip-drip? Three of the videos officially released last week along with the report were leaked several weeks ago, likely by the same agency that put together the report. There’s nothing nefarious going on in the sky that the U.S. government doesn’t know about. There’re no aliens, at least as they define them, and how we (and they) imagine “them.” No need to put on the tinfoil and check the house for bugs: when CNN is publishing articles headlined, "You can believe in UFOs without believing Trump's election lies,” one doesn’t need be a paranoiac to assume that the government isn’t being entirely transparent. Most of the UFOs probably are just weather balloons, so why now? What kept this from being disclosed in 2016? Is soaking the public in alien manipulation purely a Democratic tactic?

It’d be equally daft to write off the possibility of aliens altogether, but this is too neat, too clean, too on schedule. Whenever something really goes down, as we experienced last year, there are moments—days, even weeks—when the people in power clearly don’t know what’s happening or what to do. They try hard to hide it, but it was obvious that the specter of coronavirus was rending nearly everyone naked and afraid. When the aliens come, it will be like that—I hope. More likely, it’ll look like Steven Spielberg’s 2005 remake of War of the Worlds, an excellent movie that was the truest and moving film about 9/11. It could only be done in allegory, and as on that day, when the aliens come, no one will know what to do, and things will go so very, very fast. These reports have nothing to do with aliens. For now, it’s all about weapons.