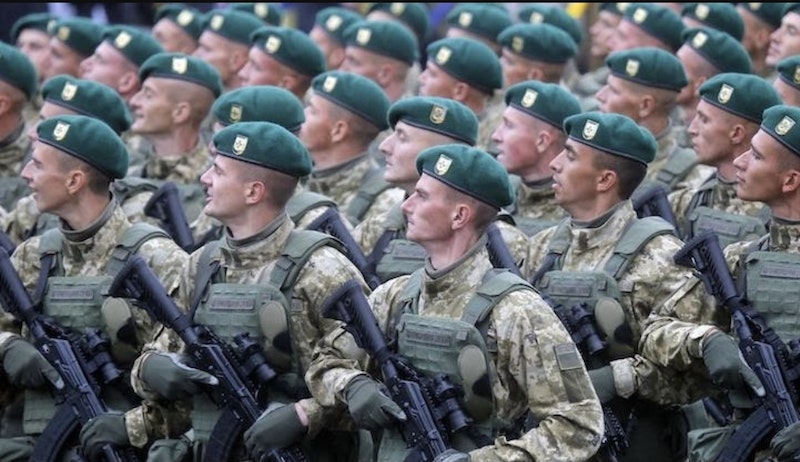 It’s the waiting that wears.

Mother, who sleeps through the night, is made of sterner stuff than me. The hours before dawn are, I find, the hardest. Awakening in anxiety, I grab my phone. But a scan of the news offers no succor. The tension hasn’t yet broken. That demonic stillness that the landscape feels before the obliterating tornado descends hasn’t yet passed.

The Kiev troops remained massed on the Russian border, biding their time before their inevitable invasion into the belly of the Russian south. There’s sadism to the Ukrainian warmongers’delay, but also tactical intelligence: the longer they wait, the more time they have to fortify their frontlines. It’s not by chance that the “sly fox” is a hero in the Ukrainians’ degenerate folk culture.

There’s something blasphemous about this waiting. It’s a demonic inversion, a parody, of the work of Christian patience. In awaiting the coming of our Savior, we abide in hope. In waiting for the Ukrainians to unleash hell in a corner of Russia, we wait in most un-Christian dread.

It’s not too much to call the Ukrainians demonic—in creating, as they have, conditions in which we Orthodox are tempted towardthe sin of despair and away from anticipation of His saving grace.

It’s been a somber Lent in general. I’m feeling every one of my 60-odd years. The chronic illness that struck me a half-decade ago, and that I’ve mentioned in this space from time to time, has started to make itself aggressively felt on some days, “knocking me for a loop.”

The natural world, which we Orthodox recognize as the realm where God’s power is immanent, provides solace. Each grub, each mite, each stinkhorn is, to paraphrase St. Anatoly of Kursk, a letter in the story of our eventual redemption in the fires of His abiding Love.

I’ve taken to bicycling in Nature each day, along the dirt roads of our own and our neighbor’s property. There’s something consoling in the plainness of the Indiana landscape in which I’ve spent most of my life.

What a pleasure to return to bicycling after years away from it. The weather has been cool, but not cool enough to require long johns. The air deliciously caresses my bare legs and my sandalled sockless feet; it plays up under the hems of my well-worn, honest Land’s End khaki shorts. There are times when I find myself stimulated by the play of an April zephyr, and, pulling over to the side of the path, I squat low in the huckleberry bushes and spill my seed among the green shoots.

A sin? Maybe. But then, it might just as well be a clean and holyact: a recognition of God’s regenerative power, welling up even in an aging man, in spring.

I’ve been searching out good news—roses in the steel dust, to cite Eliot. This article cheers me: It proceeds from the premise that the Left is in its terminal days. An interesting thesis at a time when left, right, and centrist commentators all seen to take for granted a Left ascendency with no end in sight—the apotheosis of the “successor ideology.”

There’s something “cheeky” about an optimistic paleoconservative today—something almost perverse. And yet why should that be so? We must all be conscious of how little we know of what drives events in this world. Plato’s cave is the most obvious metaphor here. But I prefer to think of Saint Demetrious, the legendary Ironist of Athos, who joyously blinded himself with a hot poker to dramatize how little we, mortal men, can see of the Truth, and who preached that we must put our faith in “blind” (the word was his) obedience to the Lord.