The fire the next couple of times. 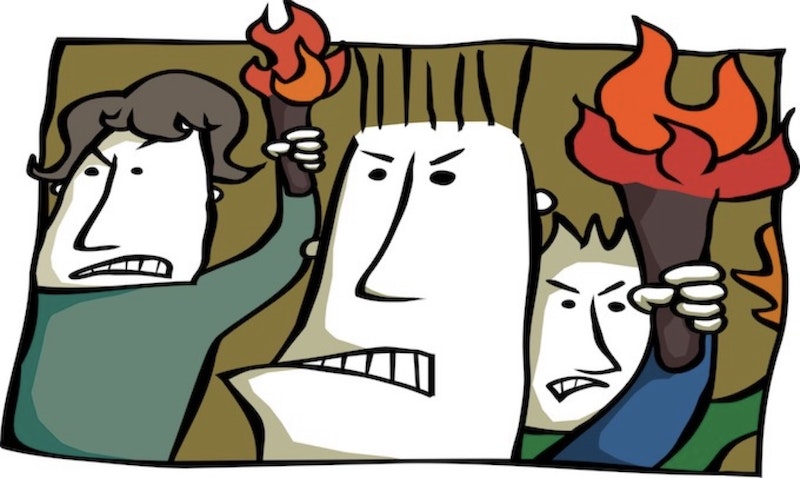 American governance hasn’t changed significantly in years, but we all know that when Joe Biden’s 100th day in office arrives this week, the mainstream media will try to make his boring, centrist, water-treading, money-wasting administration sound like a revolutionary improvement over his quite similar predecessor, boldly planning projects and quietly healing ethnic rifts. Still, I’ve said for decades that apathy is often healthy in politics, and if he inspires that, we may have reason to be grateful.

Similarly, as Sen. Daniel Patrick Moynihan famously said, race relations in the U.S. are often at their best in times of “benign neglect”—not because it isn’t a very, very important topic but because nearly every attempt to address it anew leads to more conflict-stoking than problem-solving. Boredom heals, by contrast.

Needless to say, apathy should also be the default attitude toward ambiguous and volatile court cases. Just as legal experts rightly say, “Hard cases make bad law,” unpredictable courtroom verdicts make bad times to try to heal all American ethnic divisions. Reasonable people can disagree about, say, whether we need more affirmative action programs, how important ethnic intermarriage is, or whether Hollywood needs to depict “the average American family” being non-white at the same precise rate that actual American families are non-white (which is to say, about one-third of the time).

Reasonable people, by contrast, don’t look to a specific court case—which may well hinge on where the edit occurs in some bodycam footage or how long you can safely kneel on someone’s neck—to add anything nuanced, healing, culture-fixing, or morally improving to the national dialogue. The best you can do is hope the jury reaches a plausible verdict, and you may never know for sure it was the right one.

I’d say this about virtually every court case, not just the ones involving police, black suspects, or hot-button topics. I don’t want the question of whether America will be happy or in flames a few months hence to be decided by some incident sufficiently ambiguous that—even if most people end up agreeing justice was served—few of us would relish getting picked for the jury (and there’s no shame in admitting that). Similarly, I wouldn’t want the world breathlessly waiting for the results of a coin-toss to determine whether we were going to war. Sane, gradual improvements in the world don’t happen that way.

That probably means that although most of us think police officer Chauvin looked guilty of murder (or something legally akin to it, since sane people also don’t pretend a glance at a phone-camera clip grants them the unerring power to tell the difference between second-degree and first-degree crimes, etc.), the aforementioned President shouldn’t weigh in during jury deliberations to say things like, “I’m praying the verdict is the right verdict. The evidence is overwhelming in my view.”

Maybe there’s a certain deranged consistency in BLM/Antifa’s reaction to it all in Portland, which reporter Andy Ngo says was to promise violence “no matter what the verdict is.” I mean, hey, if you know which fight you want to have but don’t have any idea how a jury will come down…

I wish none of this mattered greatly anymore, now that the Chauvin guilty verdict is in and he’s off to prison for the death of George Floyd. But of course, there will be future such incidents in a nation of 300 million people that insists on increasingly strict policing, surveillance, tracking, frisking, roadside inspecting, and banning. The ideal libertarian solution, now as it was during Ferguson riots in 2014, is to repeal virtually all laws, including laws against drugs and weapons, so that police have few reasons—few excuses, you might say—to confront non-police. That would make the populace safer and the police far less busy and harried.

But rather than focus on some undramatic, non-skin-color-dependent, technical fix—such as getting rid of laws against victimless crimes, removing “qualified immunity” from cops so they don’t keep thinking they’re above the law, or insisting that cops never have the right to turn off their bodycams—huge swaths of the population, especially the professional opinion-giving portions, actively seek to load the entire moral, historical, and racial weight of the world upon each of these cases, as if any verdict in most of them could right or seriously worsen the myriad crimes of history.

Let these cases be the tiny dramas they are in the grand scheme of things, but don’t hype them up as if each might determine the future balance of justice and the status of all tribal relations and hierarchies. No jury verdict will do all that, and much of the time they can’t even be trusted to settle much smaller things, like whether Person #4 on a bit of security camera footage is the same one who knocked over the beverage cart near the park entrance or what have you.

(It doesn’t help when even the people who are supposed to be most expert in these matters, such as CNN’s legal analyst Laura Coates, react with horror to routine elements of courtroom procedure, such as Chauvin’s defense team starting its closing argument not with a sweeping assertion of his innocence but with a reminder to the jury about the concept of “reasonable doubt.” If Coates doesn’t understand the central place of that concept in trial law, she shouldn’t be in journalism. Or maybe she should be but no one should be watching CNN.)

Recall that a year before the world waited breathlessly for a Chauvin verdict—assuming, probably correctly, that “Not guilty” would have meant fire or blood in the streets—the world was already building drastically clashing narratives out of other meager scraps of information about what went on in the Minneapolis area in mid-2020. Was that a black protestor smashing windows at the AutoZone? No, wait, it’s an undercover cop acting as an agent provocateur! No, it’s Antifa! Hang on, it seems to have been a white supremacist! Our fates shouldn’t hinge on these moments of dizzying, anxiety-inducing collective quantum uncertainty.

Yet despite the current quiet, the time will come soon enough when that cop who shot Daunte Wright, claiming she intended only to tase him, will be on trial. I don’t know what the jury will decide, but one need not be a crazed racist to hope that we won’t all be waiting on the verdict as if it decides not just her fate but that of an unpredictable number of (usually minority) arson victims and rock targets in later protests, not to mention the moral fate of America as a whole after muddled centuries of conflict failed to settle all accounts.