Round-Up of the Elites’ Latest Glitches 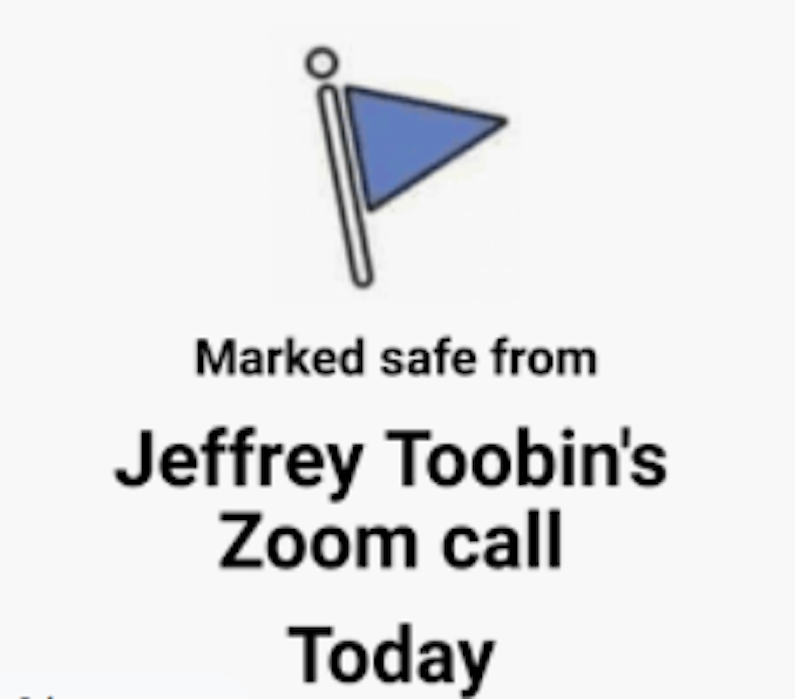 I’m grateful that legal analyst Jeffrey Toobin, outdoing that accidental butt-reveal by our fellow ABC News veteran Chris Cuomo, recently exposed his genitals during a Zoom conference and because of it ended up suspended by The New Yorker magazine. Like Cuomo, Toobin seems to have done so more out of arrogance-induced negligence than malevolent design. That’s a good sign because these people want to rule us, and their surprising ineptitude may be our only hope for salvation.

Take Hunter Biden, for example. I don’t know how much truth there is in the story that his forgotten laptop has been examined and found to have not only damning emails about his father Joe Biden’s insider dealings with Ukrainian energy executives but, per the most extreme rumors, evidence of child pornography or even rape (not to be confused with the release of the book October Surprise, which includes an interview with a cop who claims he saw similar horrors on Anthony Weiner’s laptop). But plainly, if the international elite is doing such things, it’s fortunate if their crack habits and privileged attitudes cause them to leave clues about it behind absent-mindedly.

Democrats accidentally leaving laptops where they can be examined by the FBI is almost like their version of a Republican president broadcasting his every thought on Twitter—both very useful sources of information. We deserve some warning, after all.

When the elite are really focused, rational, and cautious, by contrast, they’re usually thinking about how to police our habits (from COVID-avoidance to voting), not how to improve their own. That marks them as narcissistic psychotics, but it also gives them a built-in weakness. They think they can’t make mistakes. Our escape from the control grids they maintain—electronic surveillance, brutal policing, drones, ever more taxes and regulations—may increasingly depend upon the equivalent of “nip slips” and “fappenings,” which provide a glimpse of what they’re really up to, much of it far worse than Toobin’s election simulation/erection stimulation mishap.

Perhaps NASA’s reported plans to fit the moon with a mere 4G electronic network is a conscious effort to limit the sorts of embarrassing mishaps that fast 5G tech will facilitate back earthside. If so, the elite here may come to envy the moon.

Meanwhile, every tech slip-up no doubt increases the conviction among Big Tech insiders that only they can be trusted to guide the peasantry in the future. Take Twitter’s attitude toward anyone with the audacity to repost the Hunter Biden story, for example. Maybe the story will prove true, maybe it won’t, but who died and made Twitter such all-knowing journalism czars that they can be trusted to block the story (and even block the House of Representatives Republicans’ official Twitter account for mentioning it), then apologize for doing so, then continue to block the New York Post—one of the most popular newspapers in America—from sending new tweets for five days and counting, during the final weeks of an election, no less?

The Post responded with a tiny but telling demonstration of Twitter’s bias in such matters: a roundup of the countless viciously partisan things said by various Twitter employees on their own Twitter accounts, which suggest they look forward to their efforts influencing the election outcome. Former Twitter CEO Dick Costolo happily tweeted that capitalists will be lined up against the wall and shot as soon as the revolution arrives, which seems a little hypocritical. Elsewhere, confirming if not conspiracy theories at least pessimistic views about the incestuousness of the establishment, people have noticed an apparent revolving personnel door between Soros grant recipients, Biden’s Ukraine policy staff, the UN, and Facebook content moderators.

I don’t mean to suggest people can’t have their voluntary political affiliations and biases, whether that means Twitter being free to censor and lock the Trump campaign account or NPR warning listeners that reporting on the photos of Hunter Biden using crack could have the tragic side effect of heightening stigma against people with substance addiction problems. (I hope they’ll show similar compassion toward former Libertarian Party presidential candidate and software mogul John McAfee if he turns out to have been on something when he was arrested in Spain for tax evasion recently in flagrant contradiction of the basic legal principle los impuestos son un rob.)

I don’t even like seeing social media CEOs compelled to appear before a Senate committee to testify about these issues, as a few are scheduled to next week. And I’m wary of things like a judge recently ordering Twitter to unmask a fake FBI agent said to have spurred conspiracy theories about the murder of Democratic National Committee staffer Seth Rich.

At the same time, without calling for any government intervention, I can lament heavy-handed private actions such as Facebook threatening to remove all posts pushing the conspiracy theorists called QAnon.

If there’s to be a crackdown on false claims (as decided by the social media companies, now the presumed arbiters of truth), naturally it comes shortly before an election and favors facts that aid one political narrative more than another—not obviously the proper function of any technology company, lest we grow too accustomed to that new corporate role.

Don’t be shocked if, as if by accident, the social media companies, having set a precedent for shutting down QAnon accounts, next claim, by a sort of transitive property of truth, that any conservative messaging that resembles some of the beliefs of QAnon (possibly even beliefs that may yet prove true) is dangerous misinformation that ought to be stopped—and if that seems like overreach on their part, the odds are they’ll offer to sort it all out and make amends, right after the election. Am I risking this very column getting cyber-snubbed just for talking about this possible scenario? Who knows? And while we don’t know, we live in at least a little bit of fear, not knowing which truths can be shared and which sound too close to the fringe. That’s no way for intellectuals to live.

The side keen to silence people is usually wrong, even if it thinks it’s making the world more reasonable by trying to erase, say, something like this Dave Paulides video about big government standing in the way of Bigfoot researchers and other explorers in national parks.

There are ways to stop the censors without just using counter-censorship, too. It appears the cyber-currency exchange Coinbase is now paying left-wing activist employees—of the sort who might steer the company away from customer service toward high-handed, censorious activities—to just plain leave. That’s a free-market solution with which we should all be able to live and one I’ve urged in the past. Well, I urged firing, I admit, but this is even nicer (at least until employees decide the way to get a nice departure bonus is to start sounding like a transgender communist or what have you).

One of the first Google employees I ever met, back when it was still a fairly small, up-and-coming operation around 2005, chilled me a bit by being the first intelligent, soft-spoken person I’d ever talked to who defended the practice, then newly on the rise, of shouting down right-wing or politically apostate speakers at colleges, casually likening it to the harmless tradition of fans taunting the batter at baseball games. In retrospect, that was a disturbing indicator of the wave of pro-censorship sentiment to come in all the wrong places and all the wrong demographics, after a late-20thcentury stretch of time in which we thought only laughable Bible-thumping troglodytes dreamed of censoring things.

Maybe more firing of scolds around the time Google arose would’ve led to less censorship today. But the tighter the screws get now, luckily, the more we will all begin naturally to root for things to pop out in unplanned ways and at odd angles, as in Toobin’s Zoom conference. In a regime of strict (attempted) media control, we will need gaffes, spectacular gaffes, more than ever.