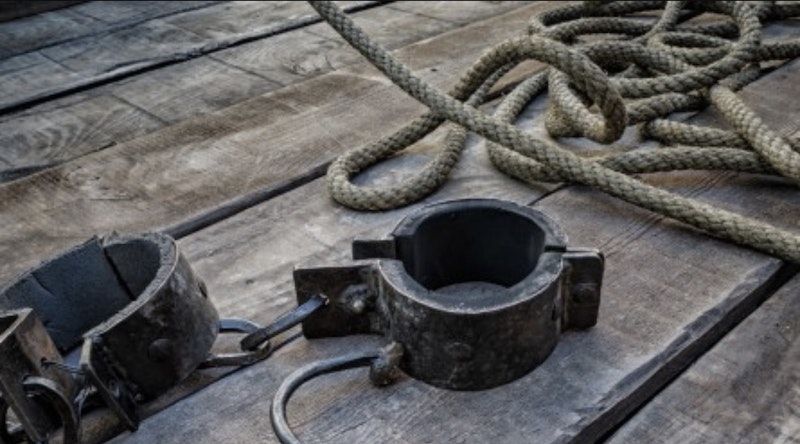 I'm finally reading The New York Times' 1619 Project thoroughly, spurred by the latest iteration of the controversy surrounding it. In case you missed 1619 somehow, it's perhaps the most elaborate and ambitious project ever launched by the Times: a series of articles, image banks, podcasts, live events, poems, and so on, in which a seemingly entirely black set of writers and artists grapples with the heritage of chattel slavery, centralizing it ever-more relentlessly as what we might call "the most basic American fact," the explanation of all sorts of economic, political, and cultural developments. It's an attempt (though hardly the first) to re-narrate American history as foundationally, fundamentally racist.

I assume that the writer who put it together, Nikole Hannah-Jones, and her editors, intended not only to shed light on American history, but to provoke, particularly with the governing idea or assertion: that the founding of the country took place not in 1776 when independence was declared, but in 1619, when the first slaves were imported (perhaps “abducted” is a more appropriate term) into Virginia. Lord knows the provocation was a success. The Times' nemesis Tom Cotton introduced the Saving American History Act to defund school systems that teach it (the Times has been promoting it as a curriculum). The most eminent senior American historians objected vociferously. Trump started tweeting about it.

Sean Wilentz and Gordon Wood's primary factual objection was to the claim that the American Revolution was fought to preserve slavery, which is indeed extremely misleading. (On the other hand, the ways that enslaved and free black people were involved as actors and issues in the Revolution are a matter of longstanding historical debate.) The Times did change the copy in Hannah-Jones's Pulitzer-winning introductory piece, and issued the following lame correction: A passage has been adjusted to make clear that a desire to protect slavery was among the motivations of some of the colonists who fought the Revolutionary War, not among the motivations of all of them.

Now hold on one cotton-picking second, so to speak.

Originally, the package was introduced online with the assertion that 1619 was America's "true founding." This phrase became the flashpoint for a series of slams; it might’ve been more provocative than anything else in the whole presentation. After the explosion, the Times quietly altered the display copy to a far vaguer and milder characterization of the ordering assertion: the 1619 project "aims to reframe the country’s history by placing the consequences of slavery and the contributions of black Americans at the very center of our national narrative." They issued no correction when they made the change: it had to be detected by Phillip Magness, writing in Quillette.

This surreptitious alteration (and others, actually) was the occasion of one of the primary criticisms made against Jones and her editor Jake Silverstein by Times columnist Bret Stephens in a remarkable column on October 9, in which Stephens also raised fundamental questions about the task of journalism and the distinction between journalism and historiography. It was surprising above all because it appeared in the Times itself. It impresses me that the Times can bring that sort of self-criticism to its own pages, especially after the palace coup initiated after another Tom Cotton imbroglio. Then the Times published a reply to Stephens from Silverstein, notable for defensiveness and vagueness.

At this point the controversy is getting long to narrate, but I think the project has many fascinating moments, the factual accuracy of which has not been put into question. I'll point to one example in what is a vast landscape: Wesley Morris's fine essay on race and American popular music, a topic which I've been thinking about for 50 years or so. The headline "Why is Everyone Always Stealing Black Music?" seems to hint that it'll be a simplistic attack on "cultural appropriation." Instead, it's arich and amusing (it starts with "yacht rock") treatment of all American music as racially syncretic. It's about as good as you can do on this topic.

And the whole project accumulates into a compelling narrative that successfully drives home its central thesis: in politics, in the arts, economy, military, sport, technology, and so on, slavery and white supremacism have been foundational. At a minimum, you can’t understand any of these developments fully or accurately without connecting them to the basic legacy of racism, exploitation, and segregation. As black thinkers from Frederick Douglass and W.E.B. DuBois have argued, the story of white supremacism is to a large extent the story of America: it's everywhere, all the time.

And then, the tensions between that version and the traditional story of America—born in freedom and maturing as a struggle to realize the founding ideals—are fundamental. These are indeed competing basic accounts of what America is and means. And though it would be right to criticize both of these accounts as simplistic, or as both containing elements of truth and elements of political ideology, it's not going to be possible merely to choose both: as ordering principles for gathering data, they’re incompatible with one another.

Nor would I think of the sort of story being told in the 1619 Project as a "revisionist" move against American history. On the contrary, I think its fundamental point of view is traditional among African-American scholars, artists, and political and spiritual leaders. Malcolm X put it crisply: "We didn't land on Plymouth Rock; Plymouth Rock landed on us." American history looks very different depending on where you're looking from, whether you're looking up or down. The 1619 Project takes up a spot in another American history: the history of African-American interpretations of their own history, and of the history also of American white people and their (our) own self-serving stories. It assembles many facts into a coherent challenge, a version of the challenge that black voices have always presented to the dominant historical narrative.

Jones has admitted what I think should’ve been obvious to everyone: dating the founding to 1619 was a "metaphor." Well, not a metaphor, really, but also not a flat statement of fact, and the question of when and by whom and how the country was really founded is not the sort of thing that admits of a flat factual answer. It depends on what you think was central to the subsequent history. Hannah-Jones' answer to that is as compelling as Sean Wilentz's, if you ask me.

I think the Times should’ve stuck to its guns with the original formulations, while making detailed factual corrections (and making them more straightforwardly). In taking the approach they have, while continuing to make adjustments in response to ideological criticisms, they've thrown Hannah-Jones under the bus while failing to satisfy the critics. On the other hand, criticizing New York Times editors is a national pastime, even among other Times editors.