Hate for the holidays. 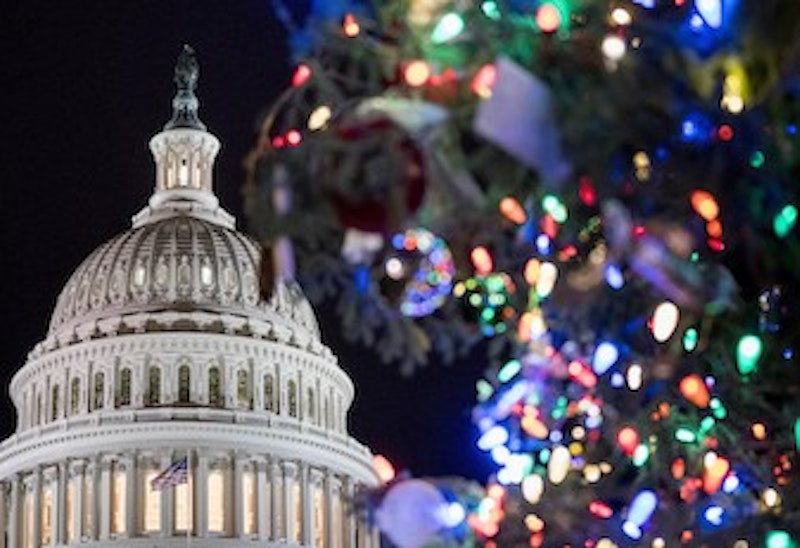 This could lead to people making a renewed effort to find common ground and speak in a shared ethical language instead of thinking they face each across a psychological chasm. More likely, it means reverting to the old dominant theory, that the other side (the one you’re not on) is just a bunch of jerks. That was an imperfect theory but not wholly wrong.

If you let me decide who’s to blame for society’s ills, I’ll give you a long list of jerks, including the Ivy League, the political and business establishments, the intelligence sector, media, faith, academia, tribalism, and several others, which may make you think an anarchist like me is just too negative to make this call (I should add that most anarchists are also terrible and wrong).

If you try leaving it up to “objective” metrics crafted by, say, the tech sector, though, you’ll get condemnations just as sweeping as mine, but blander. Even a picture of Melania that merely says “You can keep your Lady Gaga, we’ve got Lady MAGA” was recently deemed hate speech by Facebook—which isn’t just stupid, it’s arguably evidence their criteria are secretly biased to the point of fraud, and loci of fraud are arguably legitimate targets of legal action. The site also now removes posts it considers “harmful” to the community without even telling the moderator of the page on which the posts appeared what was contained in the removed posts (only who posted them). Facebook sometimes simultaneously offers you the upbeat assurance “No recent false news in your group” if you’re clean on that front. How reassuring! The tech sector—another bunch of jerks.

But they’re hardly the only jerks, and lately they get a lot of criticism not so much for being hostile as for being bad referees/peacemakers, an impossible job with which they probably should never have been tasked (whether by us or by themselves). The problem isn’t just limited to the tech sector, though. Cast aside libertarian taboos for a moment and recall how many other capitalism-fueled institutions are full of jerks (even though government is worse).

If you want to grapple with a jerk-related question more dire than whether your Instagram posts are showing up, ask yourself, for instance, how one restricts the arms trade enough to avoid arming developing-world tyrants and terrorists without actually outlawing private ownership. That question doesn’t get much high-profile media or political attention because Americans don’t think about the outside world much, but it might be the most important question weighing on the national conscience.

It’s also the potentially explosive (no pun intended) topic lurking in subterranean fashion beneath the current clash between the Ukraine conspirators and the Russia conspirators, loosely speaking. There’s a multi-layered fight there between partly-opposed cabals, partly-contradictory conspiracy theories, and just plain big piles of guns waiting to be shipped. We could reach worse resolutions than just calling the whole business of arms shipments off, but rest assured the well-connected don’t like that idea as much as I do.

Trump is at least dimly aware how gross it all is, which is why, to the astonishment of liberals, some people still think of him as a potential reformer instead of an ogre. Trump’s former Ukraine envoy claims Trump said of Ukrainians, “They are all corrupt, they are all terrible people.” Would that be so wrong? Maybe he’s showing high ethical standards here. Lysenko, Trotsky, Brezhnev, Khrushchev, Leopold von Sacher-Masoch, Helena Blavatsky, Paul Wellstone, and Wilhelm Reich. Then again, I admit Ukraine also gave us Ludwig von Mises, Milla Jovovich, Mila Kunis, Yakov Smirnoff, Super DJ Dmitri of Deee-Lite, Gogol, Jack Palance, Stanislaw Lem, Chuck Palahniuk, Solzhenitsyn, Golda Meir, Simon Wiesenthal, Natan Sharansky, Gary Johnson, and Joseph Conrad, so that nation too can be an agent of reform, not just corruption.

The main reason it’s usually easy to think one’s own side is great and the other terrible (and deserving of being targeted by weaponry), as Jonathan Haidt could ably explain (whether or not that one study is true), is that you rarely have time to review all the errors of each side, but you somehow always have time to spot a few egregious errors by the other side and get angry about them. Each side will always supply the other with enough fuel for moral outrage.

Trump ally Roger Stone, found guilty of witness tampering and more, faces up to 50 years in prison, which is obviously the kind of thing that makes the idea of Team Trump as the “reform” side laughable in many eyes. And yet… you only have to wait a few seconds before the other side responds with something so nasty you find yourself rooting for Stone’s quick release.

Tom Arnold, for instance, tweeted incoherently implying Stone should end up like Epstein in prison, while Meghan McCain tweeted “Rot in Hell, Roger Stone,” and Donna Brazile added, “I hope he roasts in Hell,” while the prosecutor himself in the Stone case said that for an encore pro-Trump conspiracy theorist Alex Jones should immediately be arrested for fomenting insurrection. Those FEMA camps Jones is always warning about are going to be damn crowded after all, if we’re going to start rounding up everyone disapproved of by that prosecutor.

The righteous have a tendency to like prisons or bombs eventually, and most of them should calm down.