Biden's on a Lark 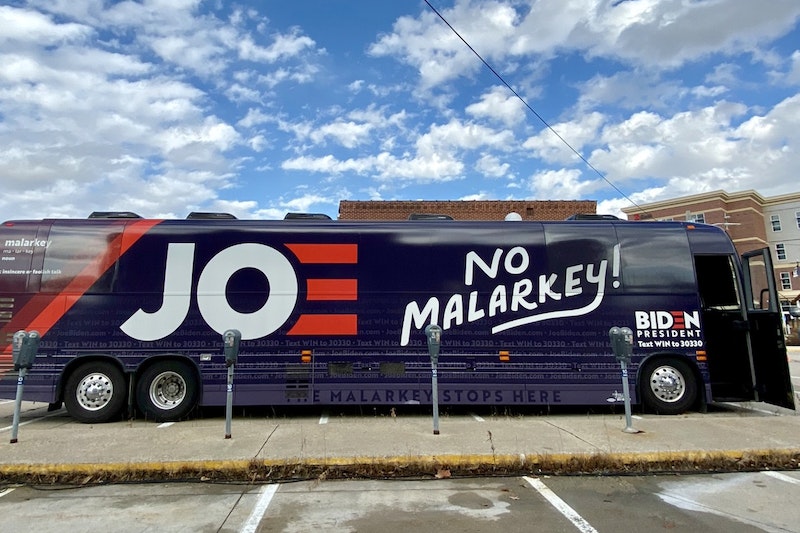 I have no stake in the stability or success of Joe Biden’s increasingly strange doo-wop campaign for the Democratic presidential nomination—maybe he’s aping Trump’s strategy, or lack thereof, from 2016, although that would require imagination—but I’m completely in favor of his “No Malarkey!” bus tour of Iowa. Biden can nibble on his wife’s finger all he wants, which isn’t a bad look for septuagenarians, but putting the word “malarkey” in the spotlight tickles me. Younger Republicans and Democrats are lampooning Hunter Biden’s father for being out of touch, using a word that’s supposedly more suited for the 1950s than today, but I disagree.

“Malarkey” was a euphemism that my parents used when I was growing up—neither swore, except a very rare “Damnation! from my mom, who copied the nuns from parochial school many, many decades ago—and my four brothers and I followed suit. I could do with Biden saying “Holy cow!,” “Nuts!,” “Rats!,” or “Holy mackerel” on the stump, since I like those phrases too. As it happens, since about the age of 13 I’ve cursed indiscriminately, and if I’d been born in 1925 instead of 1955, it’s likely my mouth would’ve been full of soap bubbles.

Anyway, “malarkey” is a good all-purpose word and the wiseacres criticizing Biden’s use of it are missing the point. According to The Wall Street Journal, Marty Obst, a political adviser to second-banana Mike Pence, tweeted, “No one under the age of 40 knows what this means.” I’ve no clue if Obst, like his boss, is a 19th-century moralist, but that’s a gross underestimation of the linguistic knowledge of those under 40.

In fairness, it depends on when your parents, or grandparents, were born, and if you have an interest in language and slang. About a month ago, during a screening of Edward Norton’s disappointing Motherless Brooklyn, set in the 1950s, one of the mooks, reacting to a friend’s boast, says, “Oh, c’mon, that’s so Chinese.” I forgot to nudge my son Nicky. It was a common phrase in our household when I was a kid, and I naively thought one of my brothers made it up, but in retrospect, of course it was common parlance. Willful bigotry? Nonsense—Chinese products (except restaurants) were considered cheap and flimsy, and the Cold War was in full bloom.

Anyway, Biden polls well among older voters, who, as everyone who follows politics knows, cast ballots at a higher rate than any other demographic group, and it’s bound to elicit a smile or chuckle from part of the electorate. Whether the use of “malarkey” was put to a focus group is anybody’s guess, since the Biden campaign is haphazard, which is odd for a putative front-runner, but at least it deflects attention from his lost-in-translation comments to the media and prospective voters, not to mention his son Hunter’s seemingly daily indiscretions.

Biden’s a kooky cat. On Sunday, in Carroll, Iowa, Biden said, “As they say in Iowa, the time to peak is right about now. I’m running to win. I’m not running to lose. I’m not running to come in third or fourth place.” Classic Biden. Who admit they’re not running “to lose”? Except Kamala Harris, I guess, who definitely, if inadvertently, ran to lose. (And don’t you love all the “Thank you for your service” tweets addressed to Kamala from her former rivals? They're probably just scared she's going to lock up their families.)

Not to mention Nanny Bloomberg, whose ludicrous presidential run is an embarrassing cry for attention—although the $500 million he’s reportedly willing to spend on ads is a welcome boost to whatever media outlets he blesses. The New York Sun—unfortunately, just digital for the past decade—which often praises Bloomberg, lashed out on Dec. 3 at the former New York Mayor for his strange decision to forbid his Bloomberg News reporters from covering the election, at least on the Democratic side. (On Dec. 4th that edict was breached, as Bloomberg News blasted Biden for attending a high-roller fundraiser in New York.)

The editorial started: “What was Mayor Bloomberg thinking? That’s the question being asked by those who nurse classical newspaper values [an endangered species]. The idea that Hizzoner [The Sun often shares Joe Biden’s patois] could pull his vast journalistic enterprise—and it is vast—out of the political fray was naïve enough. But to try to do it by halting investigations of the Democrats while continuing them of the Republican incumbent is just… Forgive us. There’s no charitable way to put this. He was thinking with, as his mother (and ours) would have said, his tuchus.”

Is Joe Biden crazy like a fox in a raccoon coat while eating goldfish in a jammed phone booth? I’m not sure. He sure seems like a loon, but has plenty of company. Like the at least temporarily derailed Elizabeth Warren, who, in need of jolt, pledged that after she wins the presidency next year the traditional way, will be reelected in 2024 by strictly popular vote after abolishing the Electoral College. She must’ve gone overboard smoking her peace pipe, since that’s an empty promise and everyone knows it: as if a Constitutional Amendment will be passed in a mere four years. Ever since Trump won in 2016 by dint of the EC, Democrats have railed about changing the system. What I can’t figure out is why the hard path to that unlikely outcome wasn’t undertaken after Al Gore won the popular vote but lost the election in 2000.

Mayor Pete, depending on what poll you take at face value, is squandering his media attention by getting lost in the fog of contradictions. And it was a riot that Biden, the political class’ best-known plagiarist, accused Buttigieg of ripping off his health care plans. Meanwhile, Andrew Yang, who’s apparently bored, tweeted the other day, apropos of nothing, “It is what it is.” Only Bernie Sanders is playing it straight, and most media companies are blacking him out, maybe because he’s the only candidate who could defeat Trump.

This election is causing many an unwanted itch. Maybe I’ll dig out a now-vintage back-scratcher, which of course was “Made in Occupied Japan.” Right now, Trump—who’s ruined a perfectly good word, vulgar, since he’s justifiably described so daily—has spun The Wheel of Fortune and has drawn a bunch of duds for competitors. As it’s said, Trump’s “underwater” on his approval ratings, but who’s willing to bet a grand he loses next November?