Sticking with The New Republic 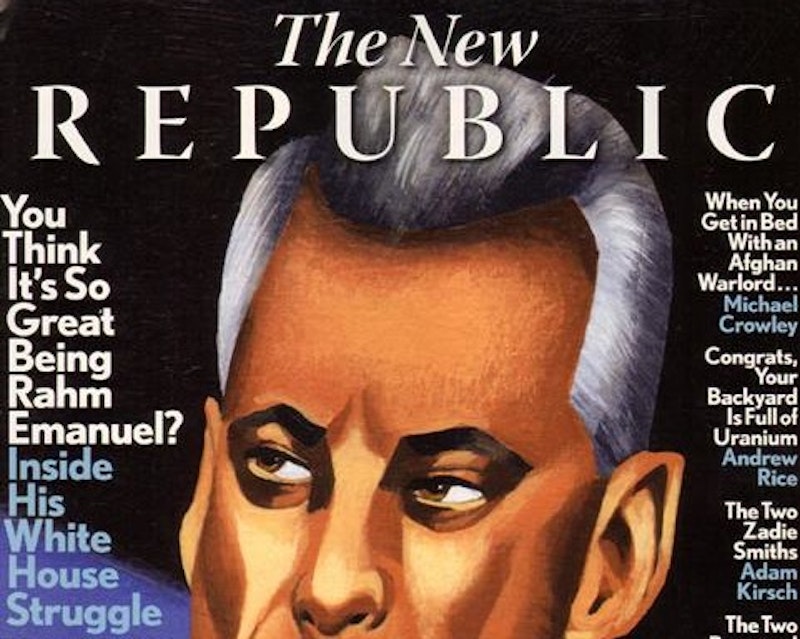 Reading Leon Wieseltier’s “Washington Diarist” column—occupying the last content page of The New Republic every two weeks—at 4:50 a.m. on a street corner in midtown Manhattan is, without embellishment, a rather strenuous intellectual exercise. The longtime TNR crank (the 57-year-old has held forth there since 1983) is unabashedly full of himself, but adds some zest to the preceding 39 or—when more advertisements are sold—47 pages, most of which demonstrate the magazine's decade-long rut. More on that below, but let’s return to Lexington Ave. and 45th St., where I was camped out last Wednesday waiting for a bodega or Starbucks to open for some coffee.

It falls to the insider-turned-outsider to notice the continual metamorphosis of a city, great or otherwise, since the daily resident—much like a parent unable to detect the month-to-month growth of a child—is too wrapped up in his or her own life to notice the changes that add up in the span of a year or two. (I lived in Tribeca for 16 years and it was hard to notice the shifting landscape, even as Rudy Giuliani and then Michael Bloomberg bulldozed the city to make it more family friendly. David Dinkins, earlier on, did nothing but play tennis and repeat the words “gorgeous mosaic” over and over.) There was a time, very recently, in fact, that the city which now apparently snoozes like the rest of the country, featured any number of spots in a three-block radius open 24 hours for the convenience of all.

Much as I’d like to blame this current dearth, at least in midtown, of establishments eager to welcome my patronage at an early morning hour on Mayor Bloomberg—the prissy scold who, God forbid, is considering a presidential bid in 2012—it’s more likely that economics have taken their toll on the bodegas and caused them to keep more conventional hours. I travel the short distance from Baltimore to New York many times each year, but mostly for day trips, and it’s only about twice annually that the stay is for the better part of a week. Pardon the windiness here, but purchasing an iced coffee whenever I want is a priority when in Manhattan, and as of last August this was possible in the same vicinity of the factory known as the Grand Hyatt Hotel.

So, I’m sitting on a stoop on 45th St., after a lousy night’s sleep due to polishing off every last bite of a typically extraordinary sirloin steak at Spark’s on March 16, and really did need to get the motor running. As that was temporarily out of the question I took a copy of the a New Republic purchased at a newsstand the day before—dated March 25, printed on March 3—from my back pocket and flipped to Mr. Wieseltier’s column, which, serendipitously, was about those who choose to live in an urban area. I’m not sure if Leon’s prose is meant to confound, daring the reader to concentrate on his sentence structure so as to avoid poring over the same paragraph again and again, or if his writing style is just too precious, but a “Washington Diarist” column isn’t as immediately clear as, say, a business article by the New York Times’ David Carr or the controlled digressions of Taki (journalism’s current Keith Richards twin) in The Spectator.  Barely awake, what’s one to make of this sentence: “The city is built on delineations and differentiations, and its particular beauty is owed to its artifice, to its rejection of stillness, to the almost anarchic spectacle of its many relations.”

Now that’s a really, really tarted-up way of saying that living in a city is exciting, full of movement, teeming with culture, and preferable to residing in a rural setting, although the author does allow, a sentence or two later, that, “Sometimes even the most sophisticated man needs to see the sky.” As has been made plain, Wieseltier isn’t every person’s cup of Lipton’s, but I rather like his jigsaw puzzle trains of thought, and on occasion—such as when he staunchly defends Israel, defying an increasing mainstream media indifference to America’s ally in the Middle East—his words can be downright uplifting.

I especially liked his closing thought, one that may or may not augur his departure from The New Republic after 27 years (or perhaps leading to an attic, pulling a Joseph Mitchell and reporting to work each day without publishing a word). He writes, after the eminently sensible opinion that his preference is for the buildings that house the president, Congress and Supreme Court over its occupants (past and present), that he’s fed up with politics, politicians and the people who breathlessly chronicle every trivial movement in Washington. Wieseltier: “There is no longer any dignity in loss: if you lose a fight for a just cause, you are merely a loser. It is an alienating spectacle; and it leaves me in the company of the Americans who ‘hate politicians,’ and pining for private experience, and preferring the worst poet to the best pundit.”

Goodness, that’s quite a mouthful, and maybe he’s even serious. Myself, I’d much rather read the punditry—even in these horrendously repetitious days of journalism—of Andrew Ferguson, James Bowman, Matt Welch, Dorothy Rabinowitz, James Delingpole, Holman Jenkins Jr. and Mark Hertsgaard than a middling poet, let alone an awful one. But what I really wonder is how the rest of The New Republic’s writers felt about this statement, for the magazine is almost all political punditry (along with some fairly lengthy, and usually not appealing, arts criticism; you can make the case that “I don’t read it necessarily, but I’m glad it’s there,” but count me out) and those men and the occasional woman who write in the front of the magazine are nothing if not exactly the sort of people Leon so harshly dismisses.

Maybe he’s perceived as a necessary evil, a survivor of so many editorial regimes that he’s part of the magazine’s furniture, the lumpy old recliner with cookie crumbs, bottle caps and stray coins deep in its recesses; or perhaps the man who’s known as much for his friendship with the ever-shrinking Times columnist Maureen Dowd as his own work knows he’s due for the glue factory and is just getting some knocks in before that final ride into journalistic oblivion.

It’s a bit weird, given my own political views and strong objections to stodgy writing, but I like The New Republic; what’s stranger still, in 2010 no less, is my preference for reading the magazine in print rather than visit its chaotic website. A reader’s online habits are personal and peculiar; I can negotiate Talking Points Memo, ESPN and Real Clear Politics, for example, with nary a complaint, but TNR and the skimpy New Yorker website just seem like a jumble. In any case, print magazines today, by the time you buy or receive them by mail, are time capsules.

The issue of TNR in question has Rahm Emanuel on the cover, a long profile by the wooden Noam Scheiber that struck me as one more re-hash of yesterday’s hot topic. There’s virtually nothing new in the story (although Scheiber unaccountably omits Emanuel’s two-and-a-half year stint as an investment banker at Wasserstein-Perella, a break between working for Bill Clinton and entering Congress that earned him $16.2 million), but I read it all, perhaps because Emanuel is such a fascinating Beltway creature that recitations of his creative profanity, steely pragmatism and strategic political brilliance are still fascinating the fourth or 14th time around. This is niggling, but I also found it off-putting that a full-page advertisement in the midst of Scheiber’s article—toasting the magazine’s recent conference on climate policy—featured a picture of the smug-looking author with Rep. Ed Markey.

And although redistributionist Jonathan Chait’s “TRB” column is a shadow of the late Michael Kelly’s during the 90s, he can turn a phrase and make me chuckle. The same can’t be said for the magazine’s editorials, which are almost always lessons in civic virtue. In the March 25 issue, for instance, this sentence [http://www.tnr.com/article/politics/muscle-bound] really rankled: “Reconciliation is a congressional procedure used to expedite votes on budgetary matters.” Gee, you learn something every day. Seriously, you’d think whoever wrote that rudimentary explanation—which has been detailed by virtually every media outlet since Scott Brown won the Massachusetts senate election in January—would have more respect for TNR’s readers. After all, the biweekly’s circulation is a mere 60,000, meaning it’s a niche political publication consumed by people who know what “reconciliation” means in a Congressional context.

Nevertheless, I remain loyal, if grudgingly, to The New Republic, which can’t be said for other magazines—Newsweek, Time, GQ, The American Spectator, Esquire, Interview, Fortune, National Review, Mother Jones, Sports Illustrated and so on—that were once part of a routine. And if Leon Wieseltier is forced to walk the plank or decides that as a “sophisticated man” he’d rather retire and watch the sky, I’ll miss his vexing column but still read TNR. Why this is so is a riddle I can’t shake, but I don’t suppose the magazine’s current owners (hard to keep track) would complain.