The Vitality of American Promise

The passage of health care reform is both historic and only a first step. 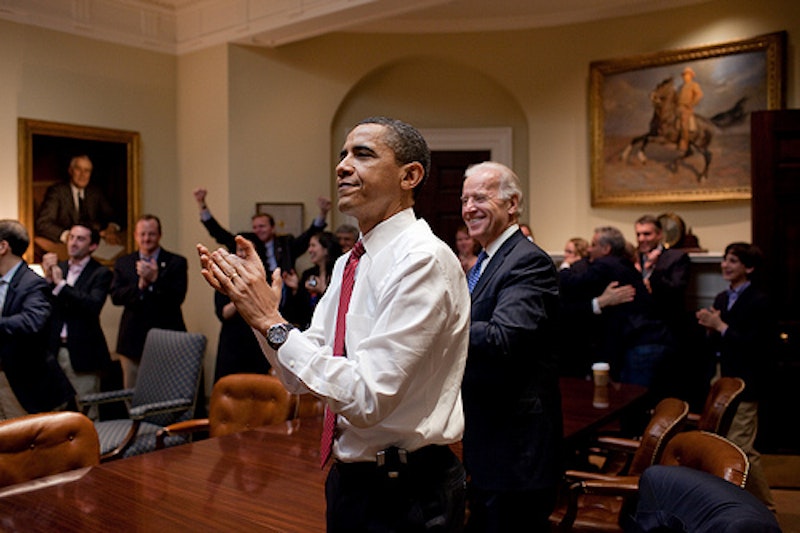 After a year focused on health care, procedure and polling, the House’s passage of HR 3590, the Patient Protection and Affordable Care Act, late Sunday night clearly alleviated a great amount of strain from Democratic leaders and the wider media. Both President Obama and the Democratic leadership in the House looked tired as hell at their respective press conferences after the bill’s passage and who could blame them?

The wash of headlines and words and pictures—the first draft of punditry—since Sunday evening also felt tired, though whether tired and victorious or tired and beaten depends on your partisan stripe.

For the victorious, two statements, presented as facts, recur over and over. The first is the historic import of the legislation: Congressional Dems earned a victory on par with LBJ’s sweeping reforms in the 1960s—the Civil Rights Act, Medicare, Medicaid; President Obama has sealed his legacy. (Indeed, Rep. James Clyburn said, "I consider this the Civil Rights Act of the 21st century.") The second statement is some variation of, “This is but the first step in real reform.”

Taken together and at face value, the two statements are a summation of how fundamentally flawed America’s health care system is, from access and profit margins to more paper and red tape and bureaucracy than any other developed nation in the world. That the first step in reform, while deficit-neutral, does not significantly bend the cost of health care costs downward over time, is considered sweeping, historic, massive, socialist, fascist, budget busting, etc, is rather depressing. America is starved for reform, and the crumbs from the adults’ table are feasts.

Millions more are to be insured, pre-existing conditions will be a remnant of the past, and yet a good deal of the “system, man” remains intact.

But Obama and the Democratic Party delivered a major legislative priority, one that brilliantly and succinctly captures the political middle. Most poll numbers thrown at the public show, roughly, a majority of the country against the bill—and yet a chunk of that disapproval comes from the left who don’t think the bill goes far enough in addressing health care issues. All told, the country is roughly split, with approval trending slightly upward.

The centrist Democrat is content; the liberal either still smoldering over intransigent lawmakers or basking in vindication. Defeat and minority status are crucial to party building and identity—unless it takes the form of the ideological cancer that’s currently crippling the Right—but it is the in the crossing of the threshold, the iteration of historic victory, where words and perception and speeches are most fertile, most malleable to the will of political ideology married to the public good.

Speaking to the House Democratic Caucus on Saturday, Obama opened with a quote from Abraham Lincoln: “"I am not bound to win, but I'm bound to be true. I'm not bound to succeed, but I'm bound to live up to what light I have.” That quote subsequently showed up in nearly every piece of reportage on the event and reform as a whole. Obama hardly needed to quote Lincoln in order to don the historical mantle of reform and sweeping change. It’s at the end of the address, though, where Obama speaks to the heart of progressive politics and what predicates someone running for public office as a Democrat:

Something inspired you to get involved, and something inspired you to become a Democrat instead of running as a Republican because somewhere deep in your heart you said to yourself, "I believe in an America in which we don't just look out for ourselves, and we don't just tell people you're on your own." We are proud of our individualism, we are proud of our liberty, but we also have a sense of neighborliness and a sense of community [applause] and we are willing to look out for one another and help people who are vulnerable and help people who are down on their luck and give them a pathway to success and give them a ladder into the middle class—that's why you decided to run.

The caucus was on its feet by the end, perfectly comfortable—and not entirely unjustified—accepting the retroactive raison d’être. It speaks to the fundamental tensions of the state and the individual, business and the worker, free markets and free minds and liberty—fundamental because they are the cyclical engine of change and growth in America.

When LBJ signed Medicare into law in 1965, he said in a statement:

The phrase “vitality of democracy” nearly wilts next to such figures as Sens. Joe Lieberman and John Ensign, or Representatives Michelle Bachmann and Steve King. The width and breadth of the Republican Party has nothing to show for a year’s worth of unethical governance: the party has countenanced a culture of hatred goaded by conservative radio and FOX News, they have countenanced an unbelievable amount of fallacious disrespect for the President, and Republican lawmakers have countenanced racial and bigoted slurs flung from the very halls of congressional office buildings. They have steadfastly refused to lead anyone, preferring instead to be lead by the nose by of-the-moment public opinion.

The Patient Protection and Affordable Care Act, both historic and but the first in a series of crucial reforms, isn’t a perfect bill. It is a shaky marriage of ideology within a flawed system. But it is a brave act of government, an argument that we can pull this country together bit by bit, together. Because while we respect fiercely our individualism, our freedom, we can’t and won’t ignore our fellow citizens. At the signing ceremony midday Tuesday, Obama said:

Extending health care to 30 million Americans isn't easy, and it's going to take herculean efforts to keep it all on the rails in the years and decades to come. Reconciling necessary reforms with legitimate small-government concerns will take patience. But that's the struggle, the inherent tension, that continuously pushes America to evolve for the better. When it comes down to it, when everything is partisan and nothing seems to be working, we can’t ignore the invisible and historical bonds of ownership—collective ownership—of this country and its unyielding promise.