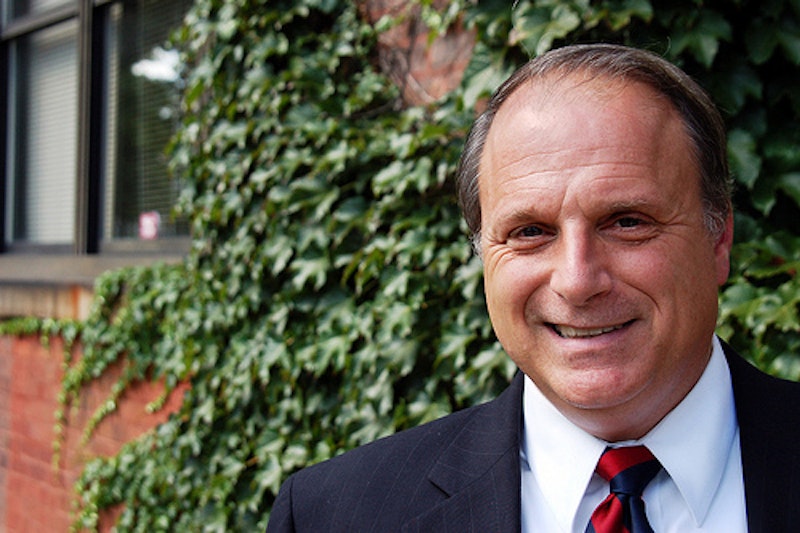 Suing for sexual harassment used to be a woman's game, but the guys are catching up. The percentage of filings by men has doubled since the early 1990s, according to New York Times columnist Charles Blow, who gets his numbers from the Equal Employment Opportunity Commission.

The fact that it's becoming normal for adult men to make formal complaints about non-violent groping is a serious cause for concern.

The recent Eric Massa fiasco brought these changing expectations into focus. Could there be a more unsympathetic figure than the former Democratic New York Congressman? Maybe the tattletales who brought him down. If these guys knew their reports would reach Majority Leader Steny Hoyer, we’d have a masculinity meltdown on our hands.

Massa's swift exile from the political class was appropriate, but the follow-up was bizarre. For once, bipartisan accord: a nearly unanimous House vote (404-2) for a post-Massa investigation, at the taxpayer's expense. Who said what and when about the ex-Congressman's tickling? It's no longer a burning issue. What we really need to know is:

Where has all the testosterone gone?

It may now be heretical to suggest that white-collar males should deal with annoying behavior from senior colleagues and bosses, without running to a parental figure for protection. For white-collar America, and those who aspire to its ways, something larger is at stake: the value we place on masculinity, and the impact this has on women.

Middle class men have always been in a tight spot where masculinity is concerned. That's what makes their masculinity intriguing—it's more nuanced. We're all in trouble if the only models for maleness are boors like Massa—or strong silent street thugs who, despite their virtues, aren't appropriate mates for the middle class woman.

Over-reacting to every unwanted, inappropriate gesture—yes, even from your boss—trivializes real sexual violence. Sure, men have the legal right to sue each other for harassment, but white-collar guys should have enough backbone to abstain from exercising this right, short of situations so extreme as to endanger them physically.

This isn't just about sex.

There are men who risk getting sacked to defend a principle. My dad is one—much to the chagrin of my mother, who nonetheless encouraged her kids to respect him. And I know others for whom losing a gig is a normal risk, a cost of doing business with your professional ego intact.

Men who are unwilling to take this risk need to do some soul-searching before they rush off to the EEOC with their complaints.

Manhood isn't tested by easy ethical situations, such as no-fault groping between equals. It is tested (and sometimes proven) by more difficult ones. We already know that men are tempted to abuse their strength. They are now given more opportunity to abuse their status as victims.

Now that we're a millennium or two away from actual hunting and gathering, these challenges and temptations are often bureaucratic interpersonal ones, taking place in carpeted cubicles and courtrooms. Or online, on the air, on figurative rather than literal battlefields.

Speaking of battlefields, Massa's Naval career antics have been dredged up to prove a pattern of abuse. Do we really have to view the sailors who never filed complaints as "victims"? They're not women. This happened in a volunteer Navy. Guys: if you can't deal with the occasional overbearing bisexual prankster, please don't join up.

And the same applies to working on Capitol Hill.

"Taking it like a man" means dealing with the unacceptable without tattling to the principal. If it's controversial to call men out for behaving like middle school maidens, it shows that feminism-for-men is now America's white-collar default setting.

I have a problem with that.

We need to bring back the double standard. If Massa had groped, tickled or bothered his female staffers, I would not be saying the same things. Men and women aren't identical: our bodies make us vulnerable, and decent honorable guys will be mindful of this.

Every culture has gender roles. While we don't want these to be ridiculously inflexible, we need, in some areas of life, to preserve different attitudes for guys and gals.

One of the more appealing American archetypes—despite modern feminism—is the man who will physically protect us. It's impossible for me to imagine this of a man who files an official complaint when his masculinity is challenged by an embarrassing jerk. As financial parity becomes a reality in our culture, as women sometimes even out-earn men, it's more crucial than ever for masculinity to retain its integrity. We need to feel something primal and irrational—it's called admiration—in order to respect the men around us. Too many women find themselves shacked up, legally partnered or otherwise connected with men they don't admire.

Massa's egregious behavior was a character-building exercise for his male staffers. Three, at the very least, appear to have flunked the test. Underneath all the talk of ethics, this is a big part of what happened. Increasingly, Americans view every uncomfortable test of individual character as nothing but oppression or abuse. When adult males report each other for salty language, infantile crudeness and tomfoolery, they lose their credibility. If an investigation discloses real abuse, serious threats or corrupt quid pro quos, let the chips fall where they may. But I hope this won't be exaggerated or, worse, cooked up to justify the hysteria that gripped Washington for an entire week.

Tracy Quan is the author of Diary of a Manhattan Call Girl and, most recently, Diary of a Jetsetting Call Girl.