Looking beyond history for a justification of birthright citizenship. 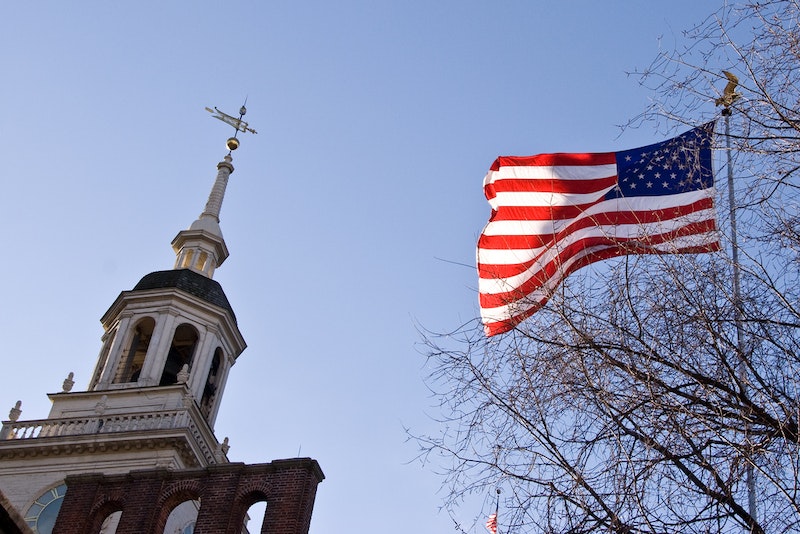 When the 14th Amendment became law in 1868, it was intended to ensure that the children of former slaves were unconditionally granted US citizenship and that former slaves were entitled to the same rights and protections under the law as whites, particularly in Southern states where they faced violence and highly discriminatory local statutes. The framers felt that enshrining these principles in the Constitution was the only way to ensure that the Supreme Court could not claim that Congress had overreached its authority and that the states would not be able to get around upholding them.

Yet, despite the fact that this amendment is understandably much beloved, particularly in the African-American community, the notion of amending it crops up again and again in the current debate over illegal immigration. Recently, Sen. Lindsey Graham (R-SC) called for the amendment to be reexamined, saying:

I'm looking at the laws that exist and see if it makes sense today. Birthright citizenship doesn't make so much sense when you understand the world as it is. You've got the other problem, where thousands of people are coming across the Arizona/Texas border for the express purpose of having a child in an American hospital so that child will become an American citizen, and they broke the law to get there.

As Graham is no doubt aware, changes to the 14th Amendment are not likely. It would require two-thirds of both the House and the Senate to approve it, as well as three-quarters of the states. His comments were probably intended to pacify his base, rather than to drum up support for constitutional revision.

Yet Graham does raise a valid question: Is it unreasonable to ask that our laws, even those so significant as to be included in the defining document of our country, have a reason and justification in the modern day? The Constitution is a not something that should be lightly altered, but even the men who crafted it foresaw the need to make changes and established a process to do so. If a provision has created an unforeseen outcome, then it should be looked at to ensure that it remains fair and that it hasn't infringed on the rights of other citizens.

So, can the citizenship clause of the 14th Amendment establishing jus soli still be justified? Graham seems to suggest that it cannot, either because slavery is no longer an issue or because illegal immigration has become a problem.

As it turns out, the Supreme Court has already examined these very issues in two key cases. In the first, The United States v Wong Kim Ark, the Court looked at the question of whether a child of foreign nationals should be granted citizenship. It ruled that the application of the 14th Amendment has not limited to the offspring of freed slaves, because the wording “all persons born or naturalized in the United States, and subject to the jurisdiction thereof, are citizens of the United States” was meant to exclude only the children of diplomats and hostile foreign forces.

Then, in Plyler v Doe, it ruled that even if a person has entered the country illegally, they are still "under the jurisdiction thereof" and therefore eligible for the rights provided by the 14th Amendment. Furthermore, the Court stated that discrimination against children of illegal immigrants, in this case, by denying them access to education, did not further the interests of the state and was liable to create a subclass of uneducated people more likely to be unemployed or involved in crime.

So birthright citizenship seems to pass the legal test, but does it still have some benefit for modern society? As has been pointed out, the majority of countries do not offer the privilege of citizenship just because you happen to be born there. They haven't created hordes of stateless people or second-class citizens by conferring citizenship only through a parent or a process of nationalization. As a nation with a large number of immigrants, however, there are social advantages to immediately offering citizenship to the second generation. It eases the path of assimilation, not just for the child himself, but for the whole family, who now have more motivation and opportunity to get involved in their communities and to learn the American culture and language.

Moreover, as the justices pointed out in Plyler v Doe, an ethical society does not punish the child for the sins of the father. Even in the case of "anchor babies," to use that rather misleading and offensive term, it is not the child's fault that he or she was born here. If they were raised here and feel themselves to be American, why shouldn't they have the same rights and responsibilities as their peers?

An examination of the 14th Amendment reveals not only that it is still justified today, but that it exemplifies the ideals of equality and fairness. By granting automatic citizenship, we reinforce the idea that this is a country where everyone is equal under the law, where class and background are not limitations and where everyone is given an equal chance to participate and contribute to society.