Shut Out For Obama

The inauguration crowds were so big that a ticket meant very little in terms of actual privilege. 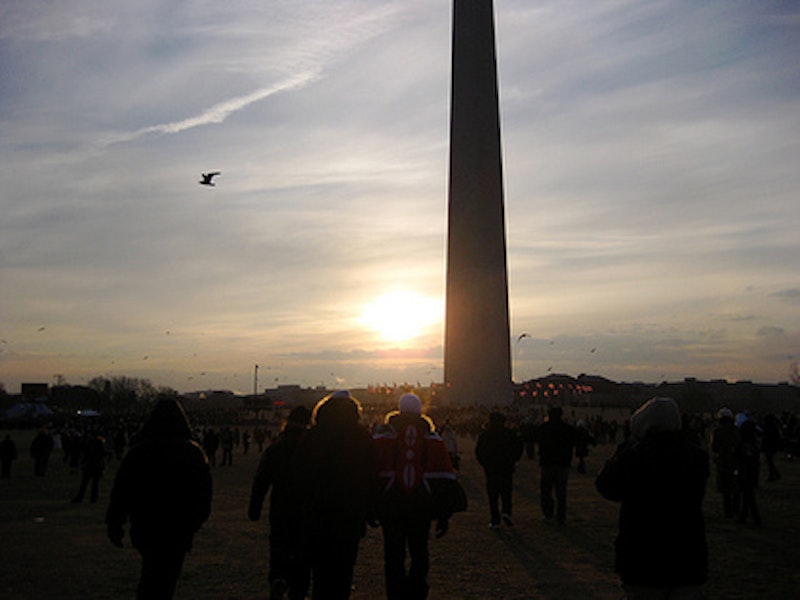 I hear the Purple Gate was even more mobbed.

I was one of thousands of people who did not make it in to the Inauguration despite the fact that we were holding tickets—well-made, embossed, beautiful tickets, complete with a little map on the back telling us where to go (in theory).

My friends and I made it to the Blue Gate area sometime around 7:30 in the morning. “Line” is a funny word, here, as there were no signs, no personnel, and little in the way of physical demarcations of where to wait. But it was sunny, the mood one of expectant euphoria. As the morning dragged on with the barest of movement, people began to worry. Do we turn around? Approach from another side? What the hell is going on?

There were cops standing on cars, looking out over us and refusing to answer any questions. Some were saying a generator went out—and thus the metal detectors were temporarily shut off. There were medical emergencies, dogs, sirens and yet more and more people milling into a giant mass. There were no loudspeakers, no TVs and, again, no personnel to, say, direct the mob.

I wish I could say my perseverance paid off. My friends and I waited until 11:45. At this point the particular crowd I was in made “progress” in the form of, I believe, a barrier falling down; we surged forward only to find another barrier and a very, very hostile crowd. Everyone had been waiting for four hours. Everyone was pissed. And when the Mall erupted every so often the sense of grim, fatalistic reality settled deeper.

The three of us pushed our way free. In the process we discovered there were four or five “lines” that had all combined into a churning mass of Obamania. Nothing: no signs, no personnel.

We made our way back to, of all places, the block on Independence Ave. where we had breakfast at seven a.m. There was a flatscreen TV mounted on the façade of a building. When my friends and I positioned in front of it at the end of Aretha Franklin’s soul-plumbing performance, there was crowd of a dozen or so. At the time of Obama’s oath, maybe 30 people were there. By the time President Obama began his address there were at least 60 people spilling into the street. And in the middle of the address the proprietors of the building realized what was going on outside their door and thankfully turned up the volume.

Truth be told, the experience was an earnest one. The crowd nodded with approval and admiration as the President presented us with a vision of an America that made sense to both the individual and the country, the religious and the non-believing, the Democrat and the Republican. The vibe was a good one.

But it was difficult at best to fully absorb the various speakers and performances, and so at some point during Elizabeth Alexander’s poem I left for a nearby bar and ordered a stiff drink for my cold fingers and aching back. Then I hear, “Yo, is there anyone with a blue ticket in this bar?” and a chorus of people responded. Before I know it, I’m in a huge group of people holding up those beautiful tickets as the bartender took pictures with maybe half a dozen cameras. Hilarious, if rather melancholy.

The District is my hometown and so on one level I am not surprised part of the day’s planning was so perfectly botched. It’s not as if the Inaugural Committee had several months to plan out January 20. But all’s well that ends well, and after grabbing some chili and cornbread from a friend’s place near Eastern Market, I headed home to catch the reruns and relive the day’s festivities from the comfort of my living room couch.