Quit girding yourself for disappointment, liberals, and wait a little while to judge the new Chief. 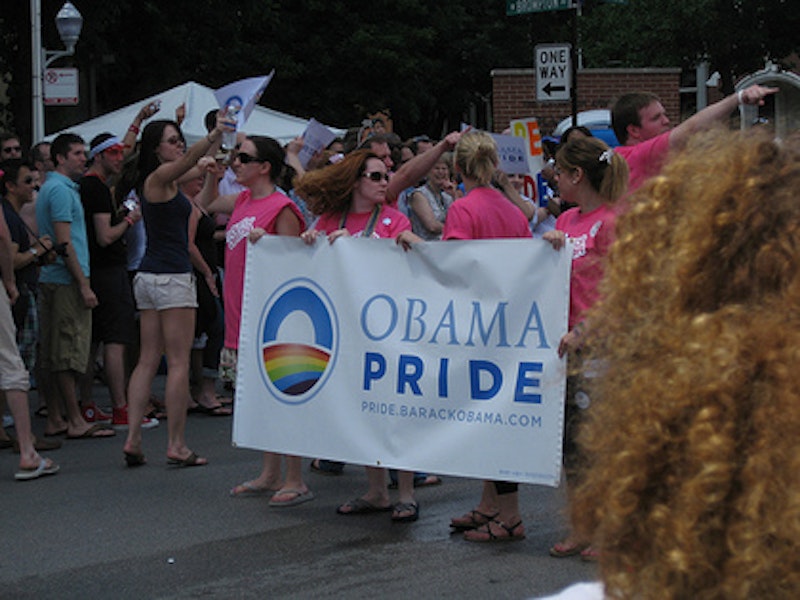 I went to D.C. for the Inauguration because I like controlled mass hysteria. I didn’t go to see anything (I watched it on a giant TV like everyone else) but to be around other people who were going absolutely Obama-crazy. It was a magical experience, and I got just a little hysterical.

Now it's day two and it's time to bitch! Well not really. It's still too early to bitch. No one is so cynical as to begrudge Obama at least a half-week holiday. Besides, polls seem to indicate Obama may be the most popular newly-elected president since Kennedy, so who could be pissed?

Still, I sense the grumblings already, including from so-called unnamed "liberals," according to CNN, who might already be concerned Obama isn't moving fast enough on an Iraq withdrawal. Combine this with Rachel Maddow still grumbling about Warren's bland invocation on Tuesday, and you have the beginnings of an inevitable liberal backlash. I adore Maddow. She is probably my second favorite person on the political scene right now. But she's being silly.

I think the problem is liberals are still suffering from Clintonitis, defined as the pain of being a Democrat and getting punched in the face at least once a year through left-sanctioned “compromises” like Don’t Ask Don’t Tell. After eight years of hardline conservative rule, liberals are uppity and defensive. They still accept the supposed truism that America is a “center-right” country. Oh yeah? Let's transport back to the 1930s and 1960s and test that thesis out.

Everyone is anxious for the first Obama betrayal. What will it be? Iraq? Gay rights? The stimulus bill? The signs are everywhere. Already Obama has said he will “consult” with military advisors about the Iraq timeline. Then there's Rick Warren. And of course those tax cuts and rebates in the stimulus package. Some of these will be problems for liberals, and some of them are Clintonitis. On one hand, a commander-in-chief cannot stick to a strict 16-month withdrawal plan—that's an estimate at best. Yes, tax cuts are a Bush policy and the last rebate was completely unsuccessful, but the bill is far from signed.

It is important for everyone in America to realize right now Obama is not the triangulating Clinton. Remember, a Clinton actually lost an election this year. This is a different time and a different politician. Obama's politics are about reaching across the aisle for things that are less significant—say, an invocation—as a way to neutralize discontent when he refuses to compromise on more important issues, like Iraq. This is very different from openly defying and even pissing off the left for political gain—poor Sista Souljah!—as Maddow accused Obama of with Warren. Don't Ask, Don't Tell, DoMA, welfare reform and many other Clinton policies were political compromise almost explicitly crafted to scorn the left. But let's remember at least two of those are already on Obama's chopping block.

I hope I don't keep reading new reports about the left being worried about a potential Obama betrayal. How about waiting for an actual one? Obama has 100 days to enact gutsy, important legislation. I will judge him based on that. Tuesday was my last day of hysteria for at least four years.