The post-election analyses have already begun among partisan media columnists and the expected GOP gains are the fault of the "ordinary" Americans. 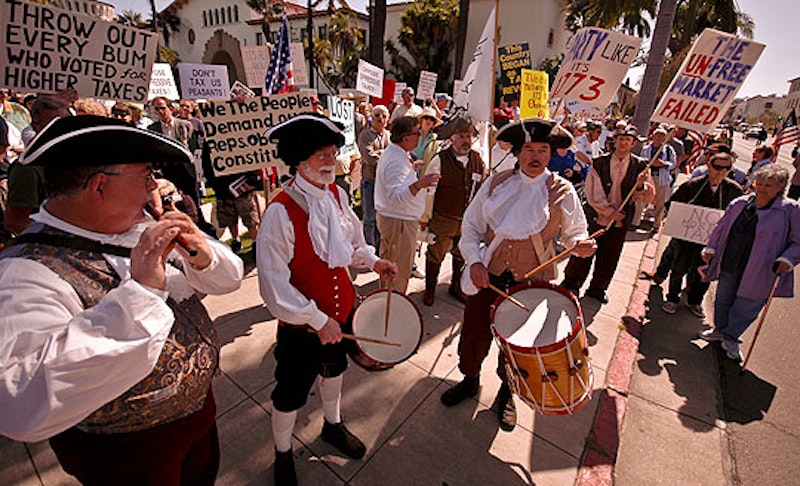 A week from now, when the midterm election results are final—save for the inevitable handful of recounts—the vast majority of American voters will have digested the new Congressional map, smile or sneer, and then go about their daily lives, of which politics is a small part. Not so for the media, of course, since the men and women who put granola on the table by dispersing opinions for print, digital or electronic outlets must soldier on, dissecting voting patterns, making fun of Rep. John Boehner’s strange orange hue, and investigating instances—real or ginned up—of fraud at the polls. This will go on until about Dec. 15, when the holidays provide a welcome respite from disparate analyses of what exactly the Tea Party is, in favor of this or that community banning Christmas carols in shopping malls.

But as The New York Times’ op-ed columnist Gail Collins declared on Oct. 28, “It’s not too soon to consider what we’ve learned from the 2010 elections.” Collins is predictably disingenuous, however, since the “we” in that sentence in truth means what “she” has “learned” in this pre-mortem of the election. It was an unbearably ugly and unruly year, filled with so many “worst moments” that Collins has only the space to describe a few of them—all involving Republicans, of course. Singled out are Rand Paul, Sharron Angle, Meg Whitman, Linda McMahon, Rick Scott, and Carl Paladino, the creepy homophobe running against Andrew Cuomo in New York’s gubernatorial contest. I think the invocation of Paladino was Collins’ nod to bipartisanship, since I can’t think of a single person who believes he’s anything less than a thug.

Dan Kennedy, the Boston journalist whose soapbox is called Media Nation, is equally despondent as Collins and most of her Times colleagues, but has the grace not to mask his disappointment in stupid and trite slapstick. Kennedy, in a post headlined “Rewarding those they despise the most,” is baffled by the findings of a Times/CBS News poll released on Oct. 28, in which it’s shown that several demographic groups that supported President Obama in 2008—women, Roman Catholics, independents and the “less affluent”—have wandered off the reservation and are poised to deliver the anticipated big Republican Congressional gains. Kennedy, while genuinely perplexed, does his case no favors by cherry-picking elements of the Times poll. For example, he notes that Obama is more popular than Congress among voters—that’s new?—and that Democrats are marginally more favored than Republicans. Kennedy takes solace (sort of) in the finding that 70 percent of the 1173 adults surveyed are optimistic that that the economic slump is “temporary” and more blamed former President Bush and Wall Street than Obama for the ongoing recession.

Kennedy concludes: “Those finding are everything Obama and congressional Democrats could hope for. The most you can say, though, is that voters will give the president an opportunity to dig out from the rubble they are about dump on him next Tuesday. Strange days indeed.”

While I appreciate Kennedy’s reference to the mesmerizing title song of the Doors’ second album, he’s not really giving readers the full picture. For example—and remember this is a Times poll, which historically has less credence than say, Gallup—it’s reported that Obama’s approval rating among registered voters is now 43 percent, roughly equal to Bill Clinton’s before the ’94 midterms, when he also had rubble dumped on him. And while the GOP doesn’t fare as well as the Democrats, the party’s approval rating is at its highest since September of ’06, just before the Mark Foley email/Congressional page scandal sealed the Democratic takeover of the House.

Niall Stanage, in the U.K.’s Guardian, has, if possible, an even more peculiar view of the election, writing that the Tea Party will be the GOP’s undoing, just watch! Pointing out the recent incident of a Rand Paul supporter attacking a MoveOn dissenter at a rally—although Stanage makes it seems as if it were a mob rather than a single lunkhead—the columnist is already warming to a future piece detailing Obama’s resurrection. “These furores play into the bigger question of whether the Tea Party movement, the passions it has unleashed, and the candidates it has propelled to prominence across the country are a net positive or negative for the Republican party. The answer is becoming clearer. Tea is the Republican party’s cocaine: thrilling for a moment, but ruinous over time.”

Maybe Stanage is correct, since every two years the amount of time and money spent on elections grows exponentially and it’s theoretically possible the economy will suddenly stand up straight and Tea Party-supported members of Congress will self-combust. I do, however, think a wiser course for the likes of Stanage and Gail Collins is to let the political storm move out to sea and wait at least until Mitt Romney sets up his “exploratory” presidential committee to make predictions for 2012.