In the wake of recent gay teen suicides, the results of a Pew Forum poll are troubling. 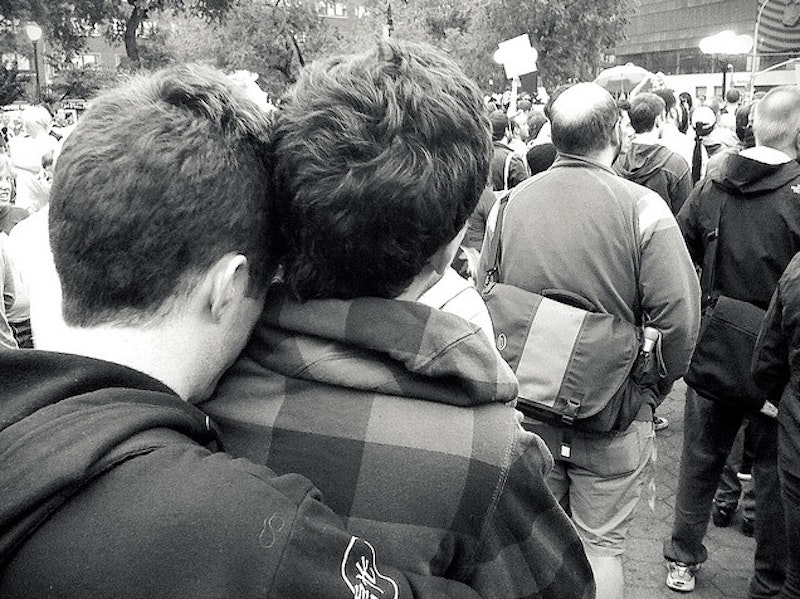 Growing up as a child in the 1960s, I was very proud of the country in which I lived. I swallowed whole the patriotic fervor passed down by my parents and teachers and felt that America was the land of the free and the home of the brave. I believed then that America was a place of equal opportunity, tolerance and respect for other creeds, beliefs, opinions and ways of life.

Today, as an adult, while I am still proud of my country, I can also see the bumps and bruises underneath the idealistic veneer. My childhood idealism has ebbed and I recognize that despite the many strides this country has taken toward civil rights and the acceptance of others’ dissimilarities, there still exists a degree of intolerance towards those who are different. Unfortunately, as September’s suicides of four teens who were taunted verbally and on the Internet for their different sexual orientations demonstrate, this intolerance can have tragic consequences. Why it still exists today toward those with different sexualities is not clear.

As shown by Hollywood and in the media, on the surface gay and lesbian lifestyles appear to have gained acceptance. Ellen DeGeneres has come out of the closet to become a nationally known talk show host and model for Cover Girl cosmetics. Comedian Rosie O’Donnell talks candidly in public about raising her children in a same sex relationship. Openly gay Congressman Barney Frank has served in the House of Representatives for many years, re-elected repeatedly by his constituents. And Will and Grace, an Emmy award winning television comedy about the relationship between a heterosexual female and her gay male best friend, was on the airwaves for eight years.

Despite the mounting evidence that homosexuality is genetic, however, many people still assert it is a chosen lifestyle. Conservative religious groups, Muslims, Catholics, Christian and Jews view choosing a homosexual lifestyle as a sin and a crime against nature. According to these individuals, the homosexuals, as stated in the Bible and other religious writings, are unacceptable to God, and those who choose this lifestyle are condemned to eternal hell. For religious people homosexuality is a choice that can be changed through the proper motivation or therapy.

Some negative attitudes exist because many people, particularly those who have little contact with them, view homosexuals in stereotypical ways. People use stereotypes to bring order and predictability to a world they don’t understand. Intolerant individuals often characterize homosexuals in a negative stereotypic way, or as mentally ill, promiscuous, lonely, insecure and likely child molesters. Classifying homosexuals with these harmful stereotypes is a way of addressing a different lifestyle many find incomprehensible.

A feeling of personal threat can also dictate how some regard anyone who is different. Contact with gays and lesbians threaten to bring perceived socially or morally unacceptable sexual urges to the surface, causing the individual to feel conflicted and defensive. This internal conflict over sexual identity and gender can be externalized by projecting it onto gays and lesbians in order to reject the objectionable sexual urges. In this way, negative attitudes toward an alternative lifestyle are engendered in those insecure in their own sexuality.

Whatever the reason, in a country that prides itself on a history of tolerance toward race and religion, there still is a great deal of prejudice toward non-heterosexuals. Whether this prejudice motivated the cruel taunts that the four teens who committed suicide were subjected to might never be known. But given the individuals involved, it cannot be discounted that at their young age insecurity about sexuality and gender identity may well have played a part. And unless a way is found to change intolerance towards different sexualities to acceptance, not just by teens but also by society as a whole, such sad waste of young lives will continue.