Even more financial troubles for the long-standing internet magazine. 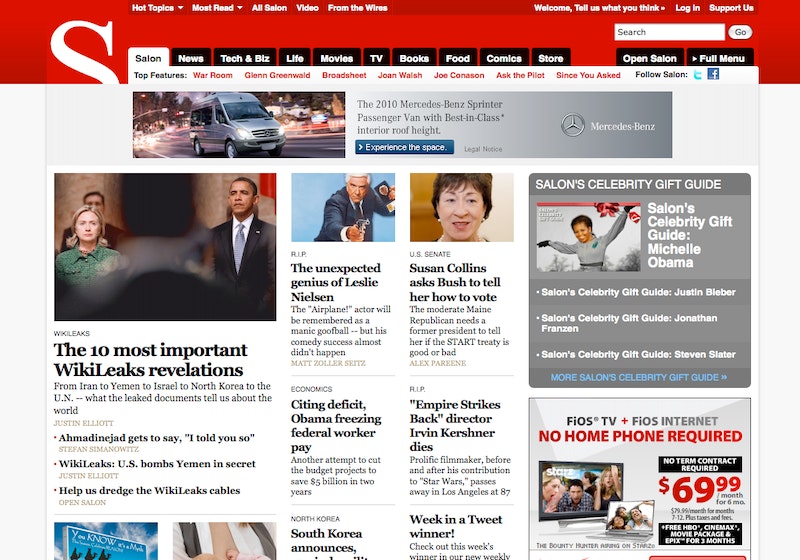 Way back in the days of covered wagons and Jesse James—or, to be more precise, 1995, which in the digital world is the same thing—Salon.com went live to great fanfare. One of the net’s first online publications, Salon strived to mix thoughtful news coverage and commentary with the then-nascent snark that’s since become the currency of so many media presences. (And it sometimes managed to combine them all into one handy bite; who can forget founder David Talbot’s Sept. 16, 1998 screed about Bill Clinton and a certain intern entitled “This hypocrite broke up my family”?)

But Clinton/Lewinsky might as well be Harding/Teapot Dome nowadays, and it’s hard to think of a Salon piece of recent vintage that’s essential. A quick look at its homepage at 11 a.m. on Monday finds, on the top left, a Leslie Nielsen obit, two pieces on Sarah Palin in the center, and an article sporting the mildly intriguing headline “Two more Iran nuclear scientists attacked.”

Elsewhere on the front page are a story on the British hubbub over employers needing to accommodate breast-feeding mothers; a slide show on “10 great new graphic novels”; and Cary Tennis’ bizarro advice column, “Since You Asked…” I’d rate the graphic novels and the Iranian story to be of the most personal interest; the mere byline on the Nielsen piece, that of Matt Zoller Seitz, is enough to make me skip it, as there are only so many hours in the day for fatuous, long-winded film commentary.

Would you buy any of this? Not “buy” as in “read” or “agree with,” but as in “actually purchase”? Because according to today’s Wall Street Journal, Salon.com “is exploring opportunities to merge with or be acquired by another media company, an acknowledgment of the perilous economics of running a free-standing online news organization.”

Adds AOL’s Daily Finance: “In its second quarter, Salon generated $1.4 million in revenues, up from $1 million a year ago. And its operating loss shrank to $454,000 from $1 million the previous year. The company, however, only had $246,000 in cash and short-term securities and faced a $7.9 million deficit.”

Red ink is nothing to sneeze at, but with solid leadership at the top, surely Salon’s loyal readers and employees needn’t worry. Well, as it turns out, they do. Editor-in-chief Joan Walsh, who took over in February 2005 and oversaw the site’s publication of photos and videos of Abu Ghraib, recently stepped down to become its “editor-at-large” and work on a book about “the fear-based politics that splits Americans and holds the country back, illustrated by her own Irish Catholic family’s political and economic odyssey.” Keep watching Amazon’s “Coming Soon” for that one.

Then too is the news that Salon isn’t really sure of where it wants to go. As the New York Observer notes, “In a bid for more ad revenue, Salon also plans to develop lifestyle ‘sub-brands’ and focus on ‘lifestyle’ content.”

If I were in a kindlier mood today I’d wager that the wording of the above sentence is meant to keep competitors off the scent. Instead, I’ll just call it what it is: Mealy-mouthed.

The general aimlessness that permeates Salon these days is nowhere more evident than on its Movies page. Ever since Stephanie Zacharek—hardly an iconic reviewer to begin with—left for Movieline this past spring, the section has been given over to Seitz, slideshows and bylined pieces by only an occasionally talented critic like Charles Taylor. Mainstay Andrew O’Hehir, who once penned penetrating essays about arthouse fare, has been relegated to reviewing the likes of D.O.A. titles like The Next Three Days and Love and Other Drugs.

This isn’t the first time that Salon has sought a partner or merger to lessen the money-hemorrhaging; given the recent consummation of the Daily Beast/Newsweek deal, CEO Richard Gringras and company are probably fairly frothing at the prospect of such a deal. But Newsweek was sold for $1, and no one’s quite sure of just what the resulting NewsBeast will be. (It’s also worth noting that Tina Brown was once one of Salon’s prospective suitors.)

Whether Salon is worth saving at this point is a fair question.